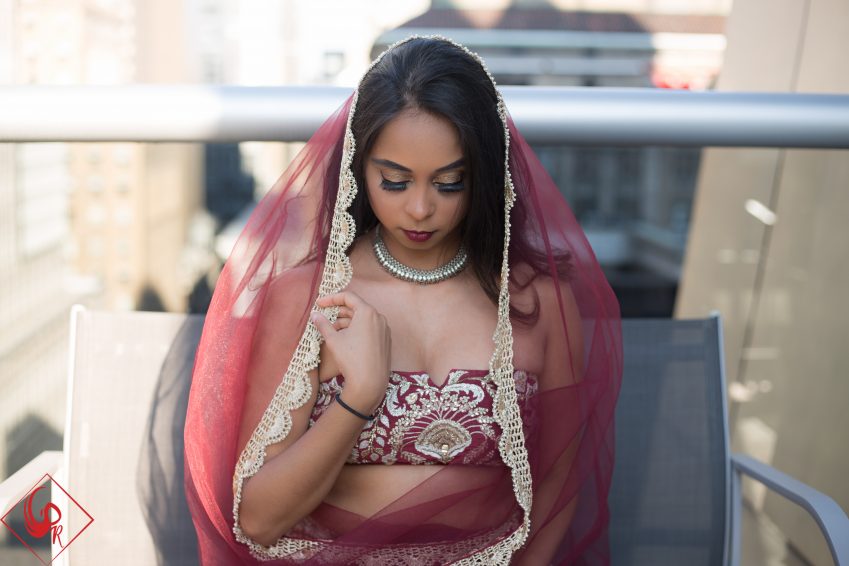 There’s this thing that all South Asian children grow up with—this deep sense of what they’re “supposed” to be or expected to be. This, I contend, is compounded for a girl child. I’m going to go ahead and call this The Brown Girl Template.

Let’s first talk about its components…the recipe to make one Brown Girl, if you will.
The Brown Girl Template:
1. Humility
2. Respect
3. Obedience
4. Intelligence
5. Silence
6. Collectivism
7. Purity
8. Tradition
9. Charm
10. Punctuality
So, what’s wrong with these? They all are great qualities to have and imbibe in a child! Looks like a pretty solid template, right? Nope, nope, nope. We need some more context here. 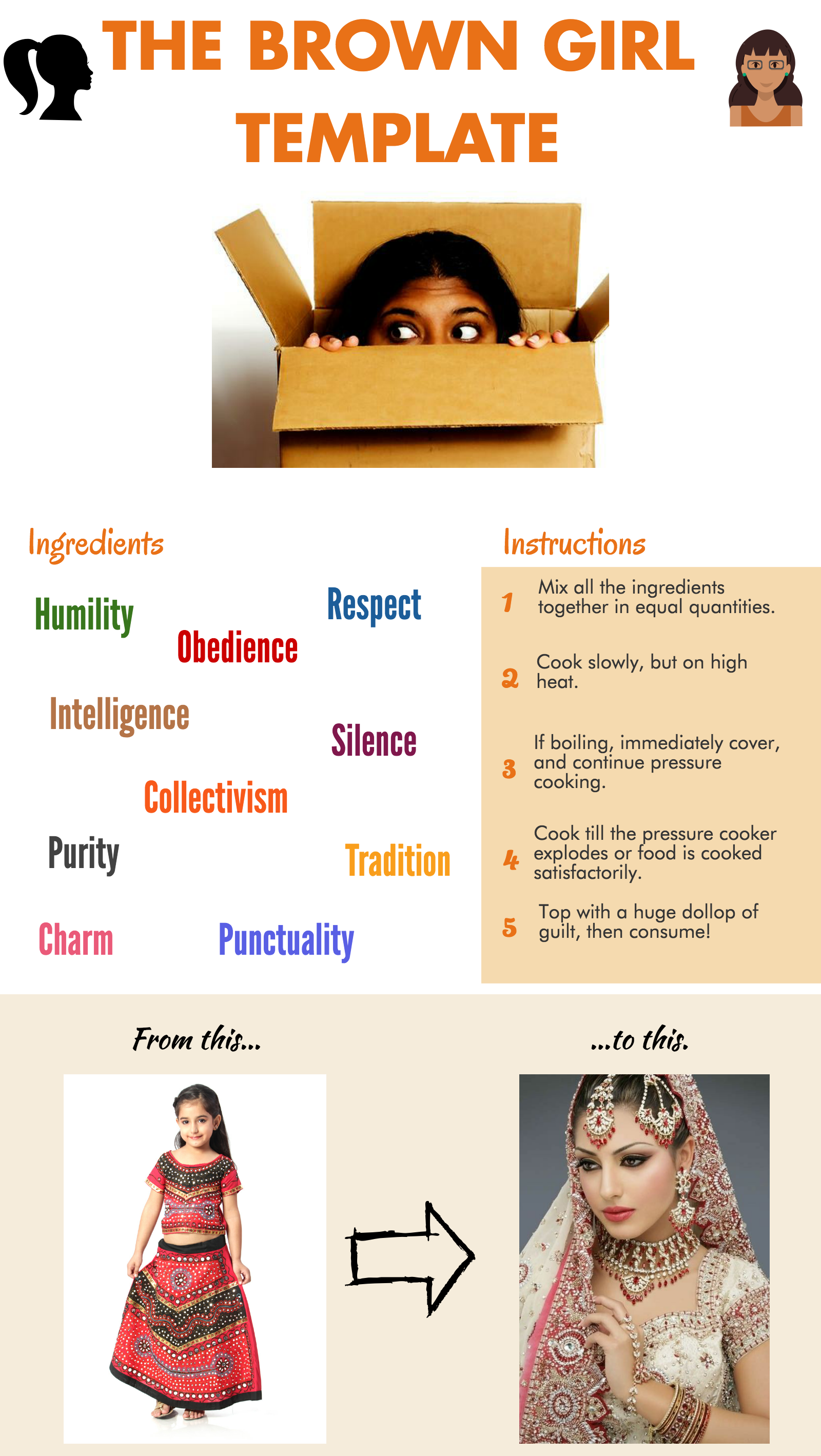 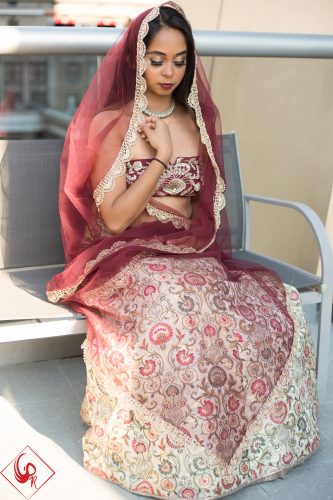 If you’re a #browngirl, I’d bet you’ve been asked at some point to downplay your talents. But this is conditional humility. If you’re first in your class in terms of academics, let’s shout it from the rooftops. If you’re good at any of the traditionally accepted female talents, let’s perform in front of as many people as possible. You dance? Okay, that means you dance for visitors who come over to your house. You are obliged to perform at all weddings and functions. You bought a Mercedes or moved into a mansion? Hmm, perhaps we should take out an ad in the newspaper! Your parents just brought back a designer outfit or jewelry costing thousands of dollars, better wear that the first chance you get. And don’t forget to talk about how expensive/exclusive it is! 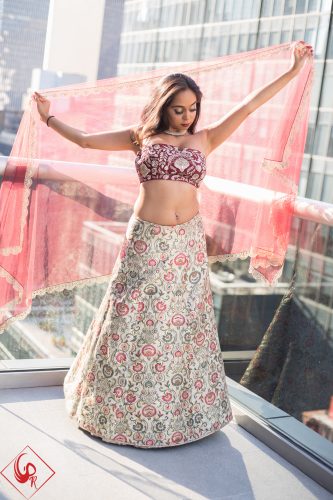 On the other hand, please withhold your pride about paying your own way through college working at a fast food joint. Eek, you’re a boxer? Better change your name so that in case you get famous, the family doesn’t have to be embarrassed (remember Mary Kom?). You want to be a…_______ (WHAT???)?? Let’s fill in the blank with any number of professions—model, bartender, comedian, biker, etc. Well, I guess that may be alright, if you do a “normal” day job and keep your “interests” on the DL. Essentially, be humble about things that are socially unacceptable.

“All I’m askin’ is for a little respect,” croons Aretha, but that’s not really all that is asked of us. “Respect your elders” is something that all #browngirls have heard their whole lives. It’s important, isn’t it? Elders do deserve respect, right? Even when they’re wrong? Must I respect bigotry if it is spewed by an elder in my community? Even if they don’t respect THEIR elders? How many of our elderly are cast off into poor conditions rather than taken care of when they’re old and helpless? For a culture that is the poster-child for the “Respect your Elders” campaign, it’s shameful. Even if they don’t respect the younger generations back?
Respect is not earned in our culture, it’s demanded, with no thought of returning it. It all comes down to power—age, gender, profession, caste, and so on.

Do as I say, not as I do. Blind obedience is a big part of the #BG template. Again, it goes back to the power and respect issue. Obedience should not be tied to respect! The whole concept of “respectful disagreement” is considered an oxymoron by our people. This obedience is expected to guide our whole lives—what we do, when we do it, where we do it, how we do it. Often including our jobs, whom we marry, how we raise our children. Nike should pay us—we pretty much invented “Just Do It”. 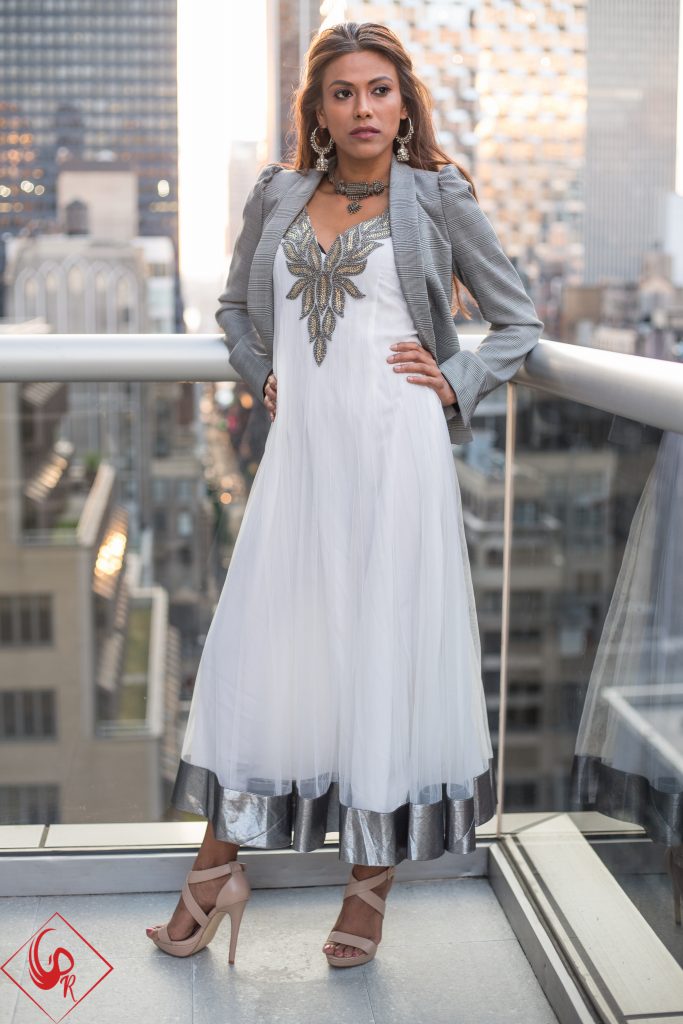 We must be smarter than everyone else. Period. But let’s use that appropriately shall we? Become a doctor, an engineer, a lawyer, an accountant, a software developer, etc. But please continue to stay in a box. Don’t question! Let’s go back one step—O.B.E.Y. No one likes a dissenter.
Oh, and heaven forbid you become something other than one of these—you’re perceived to be not intelligent enough. A beautiful model friend of mine completed her electrical engineering and received the high paying engineer job just to prove she could, and then quit to follow her dreams of traveling and modeling. That’s a lot of years and a huge investment just because “log kya kahenge?” (what will people say), don’t you think? Two other South East Asian models I know did the same! Intelligence should not be contingent upon foolish notions of what others would say and think. Intelligence is USELESS without the freedom to wield it!

Okay, I’m going to say this once and for all. Silence is NOT freakin’ golden. Peace is a state of mind, and those who are incapable of attaining it in the hustle and bustle of daily life and all the noise of today’s world, will most likely never find it alone in silence. Moreover, silence has a dark underbelly. It implies acceptance of the world the way it is today and what we see in front of us. The world today SUCKS! What we see is unacceptable! But speaking up and out is seen as a distinctly non-brown quality, particularly when it comes to the girl child. Issues of power and fairness will never change in silence. I’m going to sit here and meditate in the hope that those in positions of power are granted with the wisdom to get off their crystal towers and empower women and those less fortunate. Riiiiiight. Now, THAT’S revolutionary.

We grow up with the expectation that we must always put our family, our cultural traditions before ourselves. Collectivism. But this can be slightly sheep-like in execution, and its all-pervasiveness is dangerous because it is not taught or applied correctly! Collectivism must not equal learning to live in fear of what others say and mimicking what others do—and yet, that’s exactly how it is manifested in our culture. What we must learn to do is put HUMANITY before ourselves. Not consider religion, caste, creed, sexual preference, color, race, etc., just put people first—no matter what/who they are and where they come from. Collective Humanism, even. What a concept!

The impact our culture has on #browngirls is clearly evident in that I am struggling to write about this. To admit that I may know anything about sex? *Gasp* To say that purity should not be a pre-requisite? Ludicrous. The thing is, we’re not talking about purity of thought, we’re talking about purity of body. Sex doesn’t tarnish a body, but rape does. And not at the hands of the victim, but the perpetrator. Rape victim blaming and shaming—it all comes from this word. I watched a Documentary, India’s Daughter, based on the infamous Delhi gang rape of a medical student, Jyoti Singh. Raped to DEATH. Some of the interviews made me sick—she shouldn’t have been out late, she should have just been quiet and taken it, it was worse because she fought it. Just some of the many pearls of wisdom that dropped from those disgusting people’s mouths. How about the rape survivors, treated like food that has been left out too long and has gone bad? Purity is so overrated. Sex should be just as pleasurable and just as accepted for women as it is for men. And at the same time, don’t ridicule those who want to abstain. We must be PRO-CHOICE. A woman has every right to choose to or not to have sex. ‘Nuff said.

There’s a lot of beauty and hypocrisy attached to this word. I love being Indian, being from a culture with so much vibrance and meaningful traditions. But traditions should not be shackles. Don’t expect your #browngirl child to follow the same traditions you did in the 1970’s. Don’t expect your #browngirl grandchild to adhere to your archaic rules. Traditions should be taught in such a way that a child wants to learn more, and wants to practice them rather than feeling compelled to do so. You can’t move to America, and expect your kids to not be American! Teach them to love their culture and traditions, while accepting the parts of them that veer from the culture and they will not be resentful towards the very traditions you’re trying to enforce. 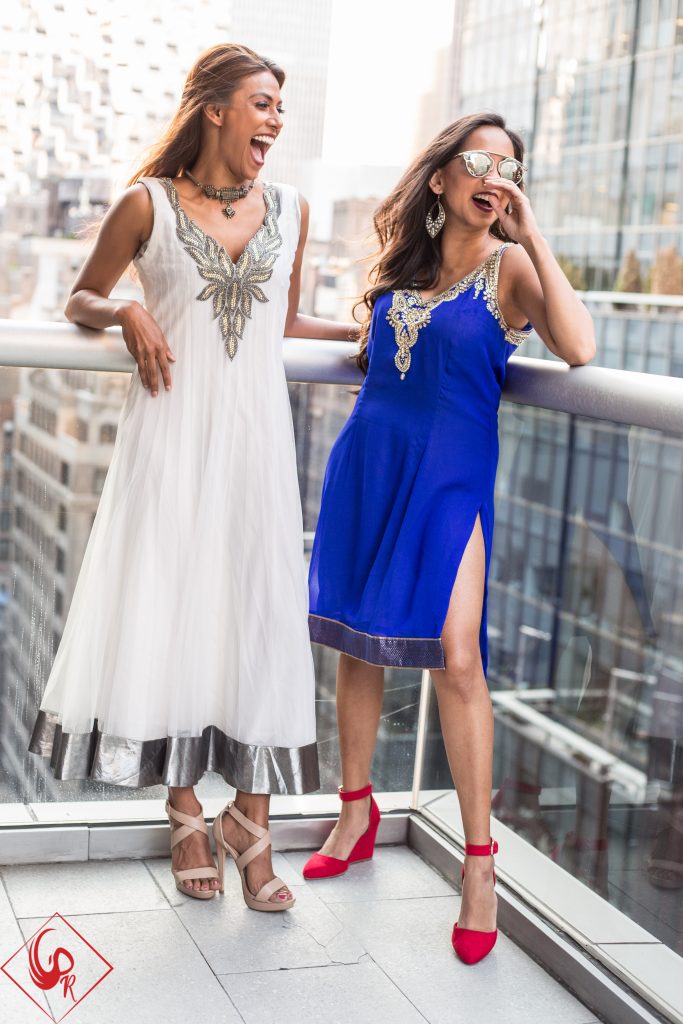 #Browngirls are taught to say “Namaste Aunty” and “Namaste Uncle” as soon as they learn to speak. They’re guided with protocol on when, where and how to touch feet. They’re taught how to be sociable, so that they are socially liked. But before you think this means they can be party animals, let me stop you right there. #Browngirls are often not allowed to spend time with their friends alone, have sleepovers, go out, etc. Be charming, but within the limits set for you. Be social, but only within our society. Always a caveat. These social skills we learn are so important, but when we apply them with intent, with choice, it’s looked down upon. Being gracious is not like painting within the lines— you’re either gracious to everyone, or not at all. 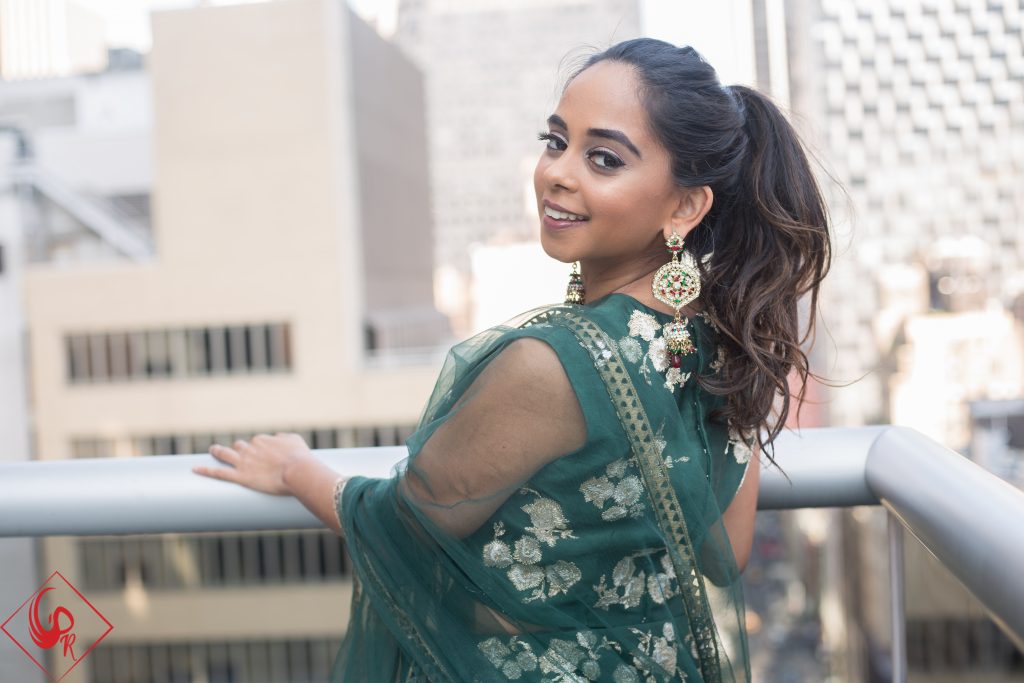 I know, I know—this one’s a head-scratcher. The term “Indian Standard Time” is a thing. #Browngirls (or really people) seem to be late to everything! But think in terms of life. Imagine a #browngirl asking to take a year off from college to travel. A #browngirl who is unmarried at 35 years of age. A #browngirl who is close to 40 and doesn’t have any kids. If you think we’re not on a timetable the second we’re born, you’re deluding yourself. Our lives were not meant to follow a timeline! We shouldn’t have to avoid our family members for fear of being asked/nagged about these things!
Cognitive dissonance is excruciating to live with; yet, we’re condemned to be stuck between our own dreams, and a need to “fit in.” There are a lot of emotions tied to this template—all the heavy stuff—guilt, desperation, rage, resentment. I feel lucky that my mother did not expect many of these things. I give her immense credit for all she has done for me. But I want her, and the parents of all #browngirls, to know that our backs are bending and breaking from the weight of these expectations.
We’ve all felt these things. I hope each of you reading this, are relating to it on some level. Because we can change these expectations for our kids and the next generation. This Brown Girl Template is literally distorting our capacity and binding us, many times to mediocrity.

The Brown Girl Template has GOT to go. 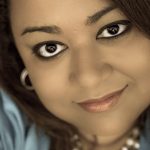 Pooja is the quintessential “Jill of all trades”. A #BG who spent the first 17 years of her life in India, and the next 16 years of her life in the US, she has never truly “fit in” with either culture, and has found reasons to rebel against and embrace both, for various reasons. She’s a proud Indian, and a proud American, but resists the term Indian-American for unknown reasons. A corporate Training & Development professional by day, Pooja has had a checkered past littered with artistic pursuits – from acting in plays as a child, to being her school’s beloved emcee at a moment’s notice, to a brief and highly unsuccessful stint as a dancer, to an advertisement dubbing artist, to a wedding singer, to a blog/poem/short story writer, to a photographer. The singing is now mainly contained to the bathroom (!), but the writing and photography are and remain front row center. To support her quirky artistic pursuits, follow her on Facebook and Instagram or check out her website.

BG Makeup Tip: How to Hide Under Eye Circles

9 Date Night Looks Which Will Have Everyone Looking Your Way

Busted! 5 of the Biggest South Asian Skincare Myths we all Believe