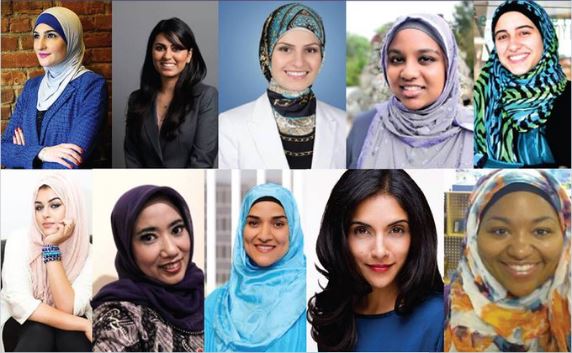 And Donald’s back at it AGAIN. *fakes gasp*

After hearing Khizr Khan’s speech at the Democratic National Convention, Trump once again did not surprise us with his ignorance. Khan spoke about his son, Army Capt. Humayun Khan, who was killed while serving in Iraq in 2004.

During his speech, Khan was accompanied on stage by his wife, Ghazala, who overcome with emotions chose not to speak. Trump took this opportunity to spread his idiocy and bigotry by suggesting— Ghazala was not allowed to speak.

In an op-ed for The Washington Post, Ghazala Khan responded to Trump. She explained how she did not need to speak for the world to feel her pain—that her silence had nothing to do with her faith or oppression.

“I cannot walk into a room with pictures of Humayun. For all these years, I haven’t been able to clean the closet where his things are — I had to ask my daughter-in-law to do it. Walking onto the convention stage, with a huge picture of my son behind me, I could hardly control myself. What mother could? Donald Trump has children whom he loves. Does he really need to wonder why I did not speak?

Donald Trump said that maybe I wasn’t allowed to say anything. That is not true. My husband asked me if I wanted to speak, but I told him I could not. My religion teaches me that all human beings are equal in God’s eyes. Husband and wife are part of each other; you should love and respect each other so you can take care of the family.”

Muslim women took to Twitter a question of their own for Trump.

Muslim women from all over Tweeted, “Can You Hear Us Now,” to show their strength and how they refuse to be silenced along with who they are and what they do. The hashtag #CanYouHearUsNow went viral in regards to the insinuation that Muslim women are not only oppressed but not allowed to speak.

Below are some strong Muslim women taking Twitter by storm.

Hey D. I spend my time creating solutions w presidents & the like (so I guess we'll never meet) #CanYouHearUsNow pic.twitter.com/lwl0CiTSJl

Muslim women "not allowed to speak?" I gave a @TEDTalks and got a standing ovation. #CanYouHearUsNow https://t.co/iggExDBXzD

Tired of the obsession w/ Muslim women and who you think we are and are capable of. We define us. We tell our own stories. #CanYouHearUsNow

#CanYouHearUsNow As a politics professor I lecture to many silent men, because I'm the expert in the room. @lsarsour pic.twitter.com/dVUZQTpe65

Check out all these Muslim women speakers NOT silent at a major American Muslim conference #CanYouHearUsNow #ISNA pic.twitter.com/XJbVdLWE65

I stood in front of 300 people to tell my story about being a refugee #CanYouHearUsNow https://t.co/jM5itQi4oQ pic.twitter.com/wcdPAB7QQq

I'd tell you to get out of the way @realDonaldTrump but you aren't in it. #CanYouHearUsNow https://t.co/OyyIa0PRJF