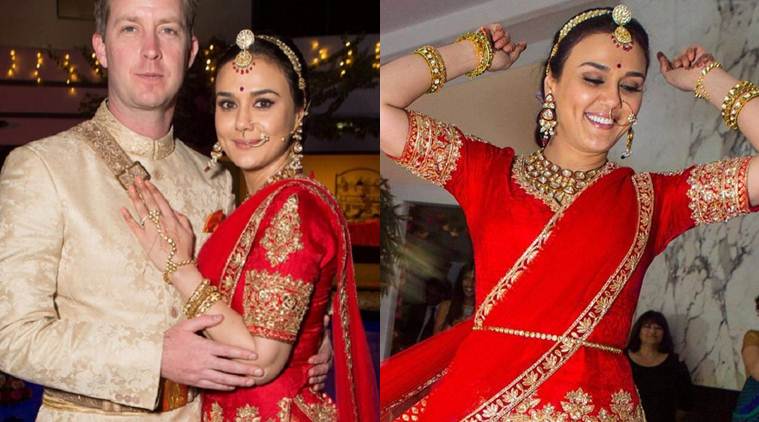 To be honest, the only reason we’re publishing this is so we could use the pun-intended headline.

But since you’re here already, let’s talk about Preity Zinta’s wedding to Gene Goodenough that took place this past February in Los Angeles. It was an extremely private affair. It was only after Zinta’s Bollywood friends began sending their best wishes over Twitter that the rest of us found out about the wedding festivities.

The pictures from the wedding were also unreleased until yesterday. Many Bollywood celebrities had attended the event in the U.S., but no one posted any pictures to their social media accounts. The pictures were definitely well worth the wait.

Zinta looks beautiful as she glows with happiness in a very natural bridal makeup look. Goodenough looks every bit the awkward non-desi dulha at a South Asian wedding in his sherwani. Zinta is wearing a Manish Malhotra red lehenga, which seems to draw inspiration from her Himachali Rajput culture. We love the perfect mix of tradition.

Here’s wishing the newlyweds a lifetime of happiness, bliss, and babies. <3

[Read More: 10 Shahrukh Khan Movies That Made us his Die-Hard Fans]

My queen with her husband? {my queen is in red so beautiful omgww} • • • • • • • • • • • • • • #srk#preityzinta#omg#ihre#grübchen#wow#old#but#pretty#hot#pink#sweet#schönheit#king#and#queen#khan#rani#kajol#ash#deepika#india#love#liebe#like4like#likes#followme#bollywood#sad#film

Reasons To Consult a Trichologist