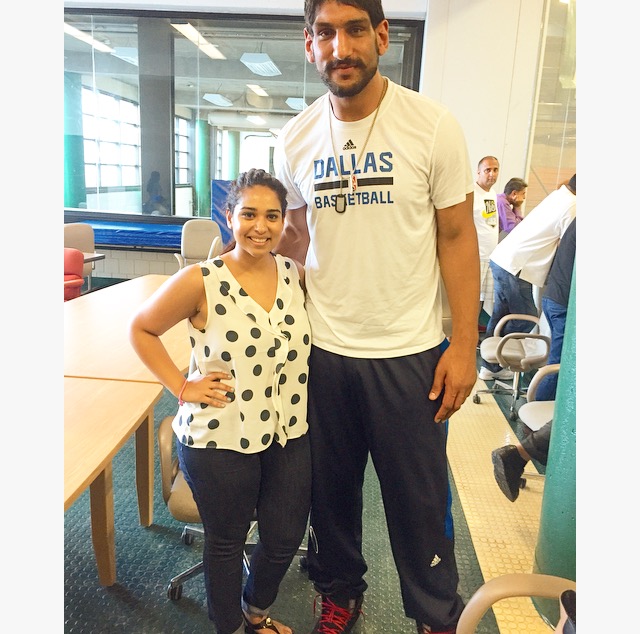 Now, just because I’m 5-feet-4-inches tall doesn’t mean I can’t hang with the tall kids on the block! I had the chance to sit down (even though he is still taller than me sitting down) with Satnam Singh Bhamara (who is 7-feet-2-inches) — the first Indian player to be drafted by the NBA for the Dallas Mavericks in 2015 and currently plays center position for the Texas Legends of the NBA Development League.

Bhamara came to Long Island earlier this fall to support basketball teams from all over New York at the Sikh Hoops Basketball tournament, and we took the opportunity to catch a few words with the man himself.

What does it feel like to be the first Indian player drafted into the NBA?

“I feel good because I opened the gate for other Indian kids. It’s important to have someone establish a solid ground for others to have these opportunities. Kids in India try to come here but they can’t, it is very difficult. This way, I am able to show kids that achieving your dream is possible.”

Did you ever think that when you were nine years old and living in Punjab, that you would be here representing such a big percentage of the Indian population, especially at such an Americanized sport?

“Never did I think that. I thought I would make it to India’s state team, or play for the country, but I never thought I would play for the NBA here in the states. It was very difficult when I first came here, and it took time to adjust, but with the support of everyone in my life, I am able to strive my best to be a role model.”

Did you ever look around and think to yourself, “Man, why am I the only brown guy on this team?”

“No, I never actually thought about that. If I think that, then those thoughts will only hold me back. Everyone has made me feel so welcome, I feel like I’ve been here for a very long time.”

You mentioned that Kobe Bryant is someone that you look up to. Tell us what he does that encourages you to push harder.

“He is always on the courts, always. When he has free time, he is in the courts. If his teammates are taking a break, he is on the courts. He works so hard to always keep improving. Now, I have my teammates who are my inspirations are well. We keep each other motivated and striving for better.”

What prompted you to join hands with Sikh Hoops?

“Sikh Hoops has such a great message behind it. I want to help motivate kids, and I want to show them that they can be where I am. All it takes is hard work and persistence. I want them to be excited to play basketball, and realize how many opportunities they have.”

Now, a fun question! If you had to eat one Indian dish for every day for the rest of your life, what would you choose?

“Daal and roti. My mom makes the best daal! I am always missing her cooking.”

If you had a piece of advice for the modern South Asian girl living in this society who had a dream to accomplish, what would your advice be?

“Just keep smiling, and stay humble. No matter what people say about you, don’t listen to them. Just keep yourself moving and always chase after your dream.”

Sindhuri Bhimavarapu is a young writer, lover of all things pure-hearted and a fan of exceptionally made coffee. She aims to inspire and motivate young women around the globe. Among her achievements are graduating from Stony Brook University with a degree in Economics and writing rap, which can be considered Jay-Z material. She enjoys light reading on modern economics, current events, and latest business ventures. Sindhuri finds happiness in the simple things in life, like indulging in Chipotle. Follow Sindhuri on Twitter @sbhims