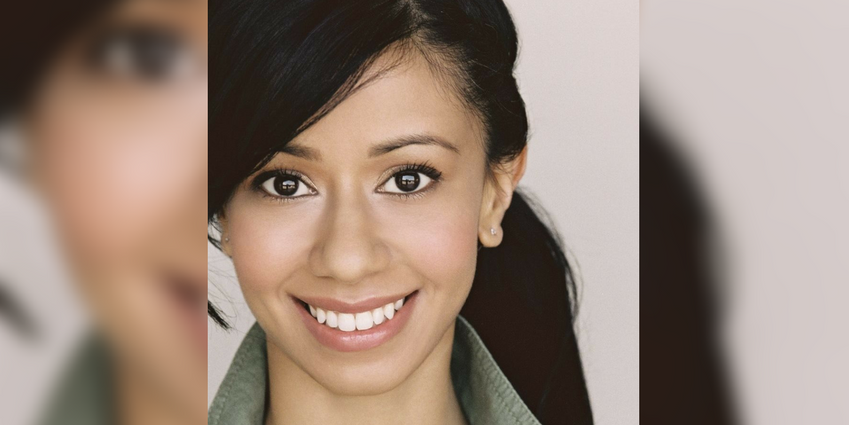 Sujata Day first stole our hearts in Issa Rae’s “The Misadventures of Awkward Black Girl.” Now, she continues to enchant us in her role on HBO’s comedy series “Insecure.” Brown Girl Magazine recently spoke to Day about her background, career path and goals for the future. It was a conversation that illuminated the many talents of the actress and highlighted the importance of resiliency in the pursuit of dreams.

Tell us about your background and how you got into modeling, acting, and writing.

“I’m from a small, suburban town in Western Pennsylvania called Greensburg,” Day said. “I was a shy tomboy growing up, living in my fantasy world of Frances Hodgson Burnett, ‘The Baby-Sitters Club,’ and ‘Sweet Valley High’ books. My love for reading naturally led to my passion for writing. My family spent many summer vacations in Kolkata, India, and I was constantly inspired by the stories told by my Indian relatives. After one trip to the motherland, I wrote a short story titled ‘Forbidden Fate’ that won an MTV/People Magazine contest and got published in an anthology. In college, I took a playwriting class and a screenwriting class. The scripts I wrote in those classes were terrible! Like really, really bad. But I just kept writing and rewriting and haven’t stopped since.

My grade school teachers used to send me home with notes saying that I was silent and needed to speak up more. In middle school, I sat myself down and decided to make a conscious change to participate more in class and activities. I’m pretty proud of middle school me for that pep talk. I tried out for everything, and I mean, EVERYTHING. Cheerleading, tennis, swim, track—I even tried out for the rifle team, even though I had never held a gun in my life. I finally made the basketball team in eighth grade and actually scored a basket during one game when the coach put me in after we were up by fifty points, or something ridiculous like that. I realized pretty early on I was no Stephen Curry. During freshman year, I auditioned for my high school’s musical ‘Guys and Dolls.’ I got a small part as a ‘Li’l Miss’ and had one line during a gigantic musical number that got a huge laugh every night. I remember thinking, ‘I want to make people laugh like this for the rest of my life.'”

How do you choose the roles that you pursue? What is your philosophy behind acting and choosing roles?

“As actors, we don’t really get the chance to ‘choose’ roles as much as we are ‘chosen’ to audition for certain roles,” Day said. “During my first couple of years in Los Angeles, the roles I was auditioning for required me to put on an ‘Apu’ accent, wear a hijab, or play a terrorist’s wife. No joke. CeCe on ‘Awkward Black Girl’ was one of the first major roles I played that was a whole person with flaws and quirks, independent of the color of my skin. After ‘Awkward Black Girl,’ auditions started to slowly change for me. Although there is still a smattering of stereotypical brown girl roles out there, I’m now going in for a bigger range of parts that have nothing to do with my ethnicity. As a producer/writer, I also create parts for myself that let me play whatever role I want. I refuse to be limited because of my ethnicity, but I also appreciate that my background is a huge part of who I am. I hope to inspire other Indian girls like myself to get into the entertainment business. Strength in numbers!”

Do you personally identify with any of the characters you play? Why or why not?

“Playing CeCe on ‘Awkward Black Girl’ holds a special place in my heart. CeCe was basically an exaggerated version of myself and I had a blast playing her,” Day said. “Every time I got a new ‘ABG’ script, I felt like Issa and Tracy (Oliver) had been spying on me because they were taking words right out of my own mouth and putting them into CeCe’s. I appreciated the fact that the role of CeCe was a normal girl who just happened to be Indian. It’s also great to play characters not like myself at all. In ‘Hello Again,’ I played a young woman who dies from cancer. I focused on who the character was before she got diagnosed and allowed that to inform the rest of her story. In every role, there’s a way to find a little bit of yourself in it. You start at that place and then develop the character more fully from there.”

Can you tell us about your roles in “Awkward Black Girl” and “Insecure?” How are they similar or different?

“My character on ‘Insecure,’ Sarah, is the polar opposite of CeCe. Sarah is the mean girl at the We Got Y’all office. My made-up backstory for Sarah is that she’s a trust fund baby who grew up in Orange County amongst mostly upperclass white families,” Day said. “Sarah can actually afford to work for a non-profit while living in a swanky condo, ordering takeout every day, and making it to her pilates class on time,” Day said. “When we were shooting, it was super hard to be mean to Issa! It felt really strange, but also really fun to switch from playing her bestie on one show to playing the villain in another. An ‘ABG’ fan on Twitter mentioned that Sarah was channeling Amir and I had never thought about that before. But it’s true! Sarah definitely uses her ‘ethnically ambiguous’ looks to play on every team. In a future season of ‘Insecure,’ I could totally see Sarah teaching an inappropriate dance class to the kids because I’ve danced in almost every major role I’ve ever played, so why stop now?”

“I’m continuously inspired by women in the industry who help other women succeed. Shonda Rhimes, Amy Poehler, Tina Fey: they are my sheroes,” Day said. “Ava Duvernay hiring all women directors for the first season of ‘Queen Sugar’ was groundbreaking. Melissa Rosenberg is doing the same for ‘Jessica Jones.’ To be honest, I’m incredibly lucky to say that my biggest inspiration is my bestie bae, Issa Rae. I witnessed firsthand how ‘Awkward Black Girl’ grew from episode one to Pharrell funding ‘ABG’ season two, all the way to HBO’s ‘Insecure.’ It’s been an emotional ride. Personally, Issa motivated me to write my own scripts and put them out there. What’s most encouraging about Issa’s journey is that she’s not an overnight sensation. ‘Awkward Black Girl’ was her THIRD web series, y’all! Issa worked hard AF for her success and continues to work hard, not only for herself, but for others too. She is very supportive of inclusive content and actively seeks out diverse talent in front of and behind the camera.”

What are the greatest obstacles you’ve faced on your journey so far, if any? How have you overcome them, if at all?

“This town’s full of obstacles! Actors face rejection every single day. I think the saying goes, ‘You book one out of every SEVENTY auditions you go out on.’ How fun does that sound? We are hella resilient,” Day said. “It’s cheesy, but I don’t let obstacles get me down. If I don’t book an acting job, I write a kickass role for myself and film it. If a producer passes on my script, I reach out to two other producers that may be a better fit for it anyway. If my film doesn’t get into one festival, I’ll do my best to get it into another festival. I’m a do-er. If the front and back door are locked and the windows are all latched, I’ll climb down the chimney like Santa Claus.”

What changes, if any, would you like to see one day in the film and television industry?

“The world depicted onscreen is a far cry from what we see in the real world. How do we change this?” Day said. “It all starts with a script. We need more women of color screenwriters. Then, top agents and managers must represent these women of color so they get the equal opportunity to interview for television staff writing positions and be considered for legitimate movies. It has been proven time and again that if a production crew is diverse behind the camera, it shows in front of the camera. Shout out to Effie Brown for bucking the status quo on ‘Project Greenlight’ and calling attention to this critical issue. Change starts at the top of the Hollywood food chain. Female executives of color must be promoted at studios and networks. Then, we’ll see more diverse female show-runners, directors, writers, cinematographers, editors, and further on down the line. The success of ‘Awkward Black Girl’ was the start of a Hollywood Renaissance that opened the doors for so many other people of color in the industry. I am honored to play a small part in a revolution that will forever change the face of Hollywood. It’s a very exciting time to be a woman of color in this town. Write your story. I want to see it!”

What’s next for Sujata Day?

“I’m still riding on a high from getting into the inaugural Sundance YouTube New Voices Lab!” she said. “My project, ‘Soda Shop’, is about an overachieving female stoner soda shop employee who has to save her store from violent robbers, menacing soda conglomerates and vengeful health inspectors that threaten her rise up the soda world’s corporate ladder. I also have a couple of other scripts and treatments that are in various stages of development. I’m planning to make more music videos with my indie band, Naked Hipster Project. I recently directed my first narrative short film that I also wrote titled ‘Cowboy and Indian.’ Directing is definitely something I want to pursue more of in the future. What can I say? I love being the boss!”

And you should certainly keep on being an inspiring boss in this industry, Sujata! Brown Girl will be cheering you on during every step of your journey, booming with laughter just like the audience of your very first high school play.