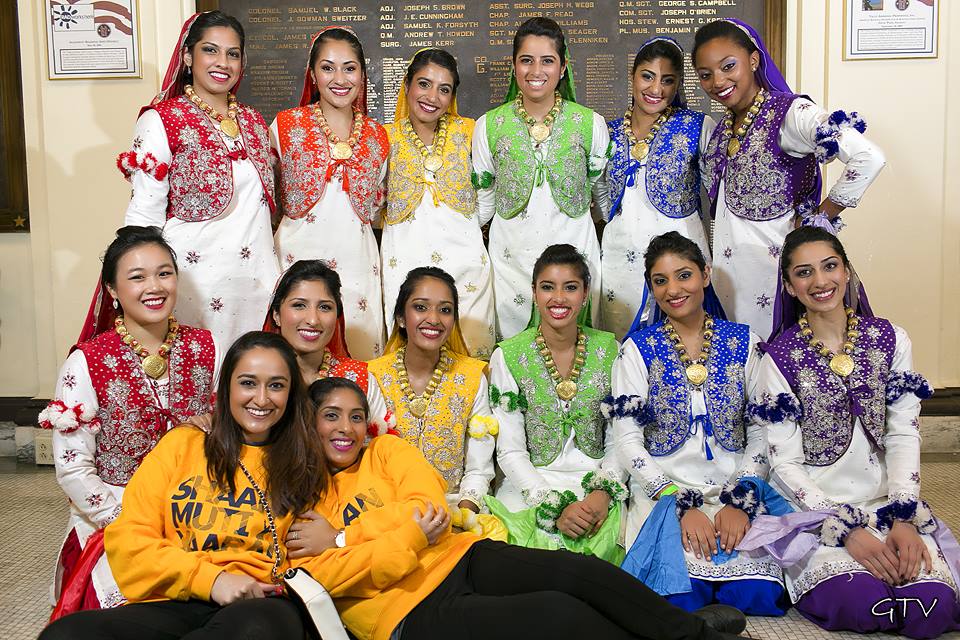 By Ravleen Kaur and Tina Lapsia

I, Ravleen, started my bhangra journey watching Big Apple Bhangra, a New York-based bhangra dance competition. But I remember only seeing all-male teams, specifically Khalsa Junction, compete. At the time, nothing seemed off to me about the teams competing. As an eight-year-old, all I was concerned with was connecting to a piece of Punjabi culture in some way, and the fact that diaspora desis were reviving bhangra was satisfying enough in itself.

I spent all my free time at boarding school watching (and re-watching) the 8-episode series. In one episode they interview ladies from BAR-B, Bay Area Royal Bhangra, an all-girls team.

Watching this, I realized at a young age how gender roles and expectations had seeped into the cultural arts aspect of the Punjabi culture. Tina and I have spent our share of time in the bhangra circuit dancing for our respective co-ed collegiate teams, where we noticed a certain discord between the way all-men and all-women teams were treated. So naturally, we decided to ask some other female dancers in the bhangra circuit about what they thought about the gender bias and discrimination that is seemingly apparent in South Asian culture, and especially in the traditional Punjabi patriarchal structure.

Below is our Fast Five interview with Ruchika Rana and Shana Narula of Shaan Mutiyaaran Di (SMD) and Navkiran Munday of Anakh Sherniyan Di (ASD), who gave us some eye-opening insight into competing in the North American bhangra circuit as women on all-girls teams.

Shana: My parents always taught me that I could do whatever I set my mind to. I am a Punjabi girl who grew up dancing (bhangra and giddha) and never knew that it was ‘controversial’ for me to do bhangra until I got more entrenched in the competitive scene. After learning about these biases, I was even more passionate about spreading the message of equality.

Navkiran: Growing up, I was encouraged to try bhangra. When I was in kindergarten, my parents put me on an all-girls team that was made out of our family friends, and we originally just performed at our annual reunion parties. We all loved bhangra and continued to dance together and even participated in a few juniors competitions. My parents were happy that I was passionate about a dance that is so deeply rooted in our culture. I was happy I was able to connect to my roots in India. Ever since then, my passion has kept growing.

Have you felt any discrimination or negativity from judges, parents, or guys teams?

Ruchika: I actually think most people in the circuit, including guys teams, are really supportive of girls. When it comes to judging, though, there have been some times when I just have to wonder. Overall, I think some judges are just sort of illegitimate in all respects, if that makes sense  In other words, I don’t think that they’re just biased against girls – I think they’re just biased in general and incapable of remaining impartial. Then other judges may just prefer certain styles, gimmicks, etc., a factor that is quite separate from the topic at hand.

Navkiran: Unfortunately, we have had to deal with a good amount of discrimination as a girls team. We have lost a few girls on the team because their parents weren’t okay with them doing bhangra, supposedly a ‘man’s’ dance. In fact, just one month ago, we went to a small local competition where the judges were traditional uncles/sponsors, and we felt that we were greatly discriminated against because we were an all-girls team that danced like guys. I have encountered other judges in the past who don’t believe girls should do bhangra or certain moves. Moreover, as a girls team we are already considered weaker than an all-male team, so we have to try even harder to prove ourselves.

A few years ago I danced on an all guys team, and I dressed up as a guy. As long as the judges didn’t know I was a girl, I would get many compliments. A few who found out I was a girl were upset by the fact that I was dressing up as a guy. This isn’t to say that everyone reacted like this; there were plenty of judges/individuals who accepted what I was doing, but the few, more traditional individuals I encountered had a problem with my actions

Do you think guys teams have an advantage over girls teams?

Navkiran: Yes, in general, a guys team does have an advantage. A girls team needs to try harder to prove themselves than a guys team. Bhangra is a dance that requires wide, strong gestures and a lot of energy. These characteristics are easier to be emphasized by men because they tend to be taller than girls and their physical build allows them to have great stamina.

Girls, on the other hand, tend to be more petite than guys on average, therefore looking wide and strong takes more effort. This really became apparent to me when I danced on an all guys team, dressed as a boy. We went to a competition, and we were the only all guys team there. Because we were the only ones, we were expected to place, because ‘of course’ an all guys team would place over co-ed teams. I was told that it would be ridiculous if we didn’t place.

In the bhangra circuit, currently, all-girls teams have been doing better than ever. I hear the phrase, ‘Girls teams are stepping it up these days’ all the time. We are getting more respect as people become more open to the fact that girls can do bhangra, and do it well.

Shana: The co-ed and independent team structure has changed significantly since I was in college. Being on an all-girls team, I definitely feel as though everyone is on the same page and skill level. We keep all of our formations and moves the same for all team members.

Navkiran: The dynamic with girls on co-ed teams has changed over time. Maybe eight years ago, girls did a few more ‘girly’ moves in co-ed sets, maybe set information so the men were the focus. After a few years, girls seemed to share the stage equally with men. Recently, in some of the more powerful co-ed sets I have seen, the women have become the focus in a few segments, and those are what hit the hardest. I believe it’s because of the whole mentality that a team is only as strong as its weakest link.

In the past, women were seen as being weaker and fragile; however, if a team can show that their girls are strong dancers, then that shows the team itself is very strong as well. It is a slightly different dynamic compared to an all-girls team. As far as guys and girls doing the same moves, there I have seen issues plenty of times. There is one move where the dancer slaps his or her thigh, and in the past it was seen as disrespectful for a girl to slap her inner thigh. Presently, more judges are okay with girls doing this. 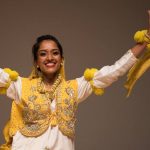 Ruchika completed her undergraduate studies at the University of Connecticut, where she first began dancing bhangra competitively with Husky Bhangra. She went on to join Shaan Mutiyaaran Di in 2014 while completing her Master of Science degree in Speech and Language Pathology. Ruchika also co-founded Connecticut Bhangra Association, Inc (CTBA), a non-profit organization dedicated to spreading cultural awareness. CTBA has been distinguishing itself in Connecticut by hosting bhangra classes, inviting the youth of the state-wide South Asian community to become more involved and active.

Shana attended The George Washington University where she studied public health and received her master’s in public health from Emory University. She is currently a tobacco control policy analyst working at the NYC Department of Health and Mental Hygiene. Shana has been dancing bhangra since she was a young girl. As she grew older, she began to teach bhangra and giddha to children in her community in central Pennsylvania.

Once Shana began her undergraduate studies, she joined GW Bhangra where she served as captain and choreographer from 2006-2007. In 2008, Shana helped to establish an all-female bhangra team in the DC area, DC Bhangra Crew. Shana then moved to Atlanta, where she taught bhangra classes at Kruti Dance Academy and competed with Emory Karma Bhangra.

In 2012, Shana moved back to the tri-state area and joined Shaan Mutiyaaran Di. Since joining Shaan Mutiyaaran Di, Shana has served as an integral part of the team as a dancer, historian, performance co-chair, and social media chair. In 2015, Shana co-founded Shaan Studios NYC, a dance school with the mission to spread the love and passion of South Asian arts to the New York City community. 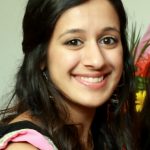 Navkiran was born and raised in Canton, MI, and recently graduated from the University of Detroit Mercy. Currently, she is a student at the University of Pennsylvania School Of Dental Medicine. She started doing bhangra in kindergarten with a few family friends. At a young age, they formed a team and competed in junior competitions. She has been dancing ever since, being a part of everything from an all-girls team to co-ed, and even dressing up as a boy for an all-boys team. She’s been captain of Anakh Sherniyan Di, a Detroit-based all-girls team, for the past year and a half. Bhangra is her biggest passion and has given her some of her most memorable experiences.

Ravleen Kaur is a student at The Ohio State University studying public affairs and public health. Her hobbies include drinking over-sweetened coffee and doing bhangra in public spaces. She is currently planning to run away from her home state in the Deep South and eventually work in the public health field.