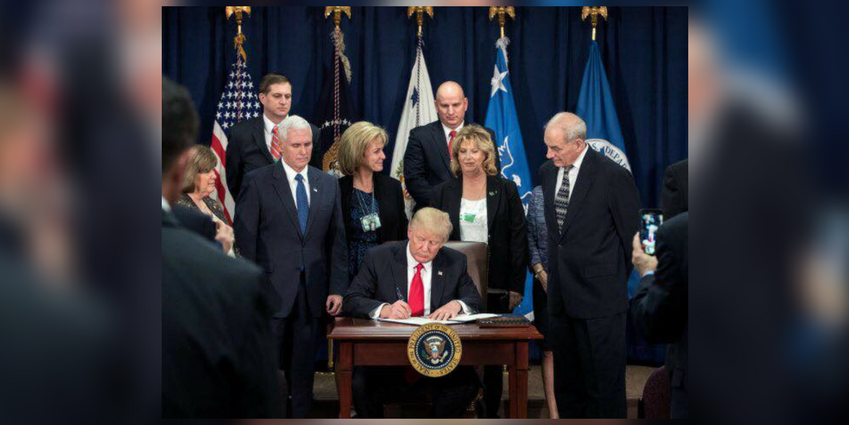 On the campaign trail, Donald Trump made various comments about immigration, consistently targeting Muslims and Mexicans. He’s claimed numerous times that he wants to create a “Muslim registry” of immigrants and to build a wall along the border between the US and Mexico. In order to incite fear in his potential voters, he has also insulted these groups, calling them terrorists and gang members.

Today, we’re seeing that he’s moving one step closer towards accomplishing his campaign promises. With the use of executive orders, Donald Trump has moved forward with building a wall on the US-Mexico border and has plans to limit immigration from Muslim-majority countries. He also plans on decreasing the number of refugees we accept. These are all part of his “national security” measures.

Firstly, his actions create more fear and support the unfounded stereotypes surrounding brown people. Many brown people today are facing discrimination, hateful speech and the “lowercase kkk” as Aziz Ansari called it on “SNL.” Instead of increasing “national security”, these policies decrease the security of minority populations within our country.

Secondly, most crimes, terrorist attacks and shootings are committed by American-born individuals. The American Immigration Council published a report in 2015 showing that there is a decrease in crime rates with increased immigration rates and immigrants are less likely to commit crimes than native-born citizens. If we wanted to stop crimes and shootings, we should take a look at our gun control measures not at immigrants.

Thirdly, Donald Trump wants to hold the ban on Syrian refugees until the Department of Homeland Security improves its vetting process. However, the vetting process already takes up to two years to be completed.  There are twenty steps involved, including two background checks, three fingerprint screenings and an extensive in-person interview. I’m not sure how much more thorough a vetting process can be.

Fourth, if Donald Trump really stood for economic development and what continues to make America great, he would recognize that this country is made on the backs of immigrants. From the building of the first transcontinental railroad to today’s agricultural, healthcare and IT workforce, immigrants dominate in the sectors necessary for America’s economic prosperity.

In a study by McLaren and Hong, it was found that for every immigrant that enters America, there are 1.2 local jobs created for local workers, and these jobs are usually held by native-US born workers. Additionally, wages do not decrease as a result of increased immigration. In fact, wages increase in the local, non-tradeable sector. In another study, it was found that immigrants start 28% of new businesses in 2011.

Lastly, immigrants are an invaluable asset to this country, and not only because of the economics, but also because of what they represent. While America has not always shown tolerance for people of color and we still have much to accomplish in this realm, America has become a symbol of freedom to people all over the world. By closing our borders and discriminating against minorities, we no longer let America be the sanctuary it used to be.

The Syrian refugee crisis is a humanitarian crisis. There are children growing up in crowded refugee camps and families that underwent some of the most strenuous experiences to escape Syria. A 2014 UNICEF report from Lebanon found that two thousand children living in refugee camps suffer from severe acute malnutrition. If a child can recognize that we should help Syrian refugees and not turn them away and articulated this to President Obama, surely a 70-year old man should try to learn a little bit more on the topic before he continues making policy.

Donald Trump’s recent spree of unilateral action through executive orders seems difficult to stop especially with a Republican-controlled Congress. So, how can we resist his policies and express our dissent? An executive order can be overturned by the Supreme Court or a new law passed in Congress.

Since the Supreme Court is not supposed to be influenced by the public, that leaves us with influencing our elected officials. You can find your representative using this website, and you can also search their pages for phone numbers and in-person events you can attend. Call them until you speak with an aide and tell them why it’s important to you as a voter that they do everything possible to prevent this executive order from becoming a reality.

Tell them about your personal stories as an immigrant or your parent’s stories or your grandparent’s stories or your friend’s stories. Make them realize that we are not “others” or any lesser because we weren’t born in this country and that immigrants are people just like anyone else looking to give their families the best life they possibly can. Our voices matter and the more we push back, the more we oppose, the more Donald Trump and Congress can’t ignore us.