Global Sisterhood: How the US Women’s Marches and India’s #IWillGoOut Movement Made Similar Statements 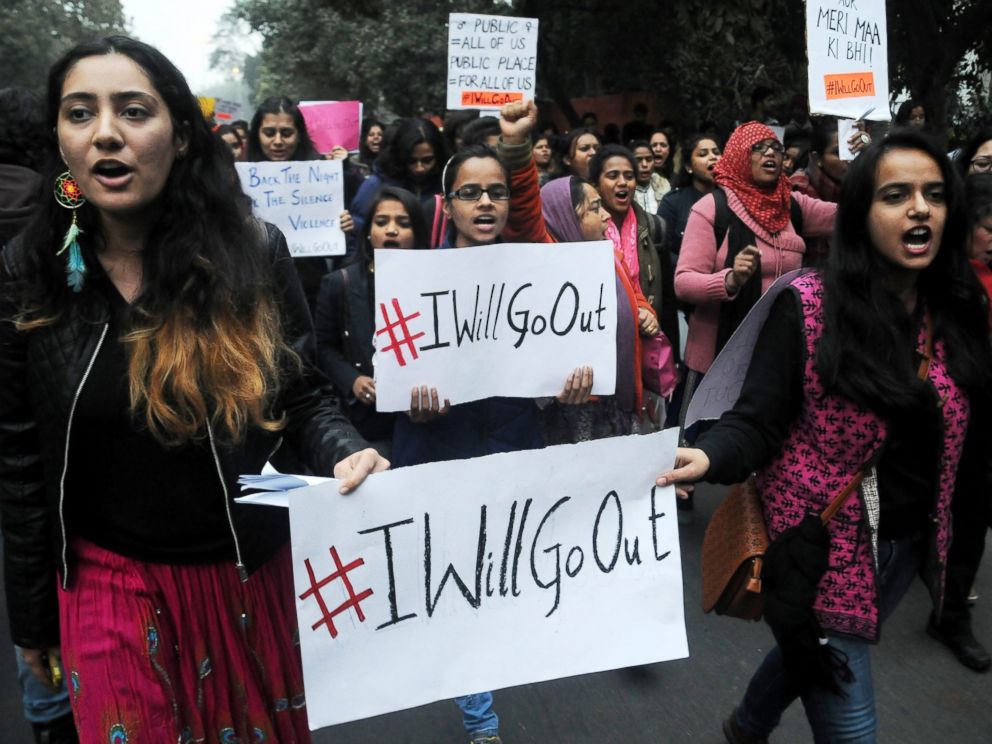 On January 21st, 2017, an estimated 4.6 million Americans participated in what was intended to be the Women’s March on Washington, but had overwhelming response across the country. The same weekend, in India, the #IWillGoOut movement also made waves.

The #IWillGoOut movement was a reaction to mass molestations that occurred during a New Year’s Eve celebration in Bengaluru, Karnataka. Amidst a large crowd celebrating the new year, many women were violently molested. Due to the crowd and subsequent chaos, many women couldn’t even identify their attackers, and some were molested multiple times. In response to this, the Samajwadi Party leader, Abu Azmi, stated:

If my sister or daughter stays out beyond sunset celebrating December 31 with a man who isn’t their husband or brother, that’s not right.

Essentially, Azmi placed the blame on the women who were just trying to celebrate the new year. He went on to discuss how women, through their clothing choices, deliberately attract men:

If there’s gasoline, there will be fire. If there’s spilt sugar, ants will gravitate towards it for sure.

As a result, the #IWillGoOut movement sparked on social media and, on January 21st, extended to public marches. Hundreds of women across 30 Indian cities, including New Delhi, Mumbai, and Hyderabad, walked the streets flashing posters and chanting slogans to claim their equal right to roam public places. What set this movement apart is that members of the LGBT, queer, asexual, and intersex communities also participated in the marches, which even extended to smaller cities like Thrissur, Kerala.

It is largely thought that the United States is a tremendously safer place for women than India – but is it really? It is easy to think that such problems are only an ‘India or Middle-Eastern problem,’ but that is absolutely not true. While there are differences, the more I examine it, the easier it is to recognize the harsh similarities between the attitudes towards women in both countries.

Here in the US, the general attitude amongst women is to never take an Uber alone at night, and the same goes for in India too. There have been a few instances of Uber drivers sexually assaulting passengers in both countries. But we should not have to hide behind men to feel safe. A public space should not have a time constraint on when it is safely accessible for women versus men.

Inspired by the hate-filled election rhetoric, the Women’s March on Washington brought millions of Americans together to stand up for their basic human rights. Many important issues were touched on during the marches and many powerful speeches were made concerning immigration, funding for Planned Parenthood, and gender equality.

We both have struggles, which will only get better if we support one another. Women face the same issues, regardless of their country of residence. Our global sisterhood is vital and we need to protect it by encouraging and aiding our sister movements. Together we are stronger, and both the Women’s March on Washington and India’s #IWillGoOut campaign have made an important statement regarding the necessity of raising the bar on how women should be treated – to live a life without fear – regardless at which hour of the day or night they go out.