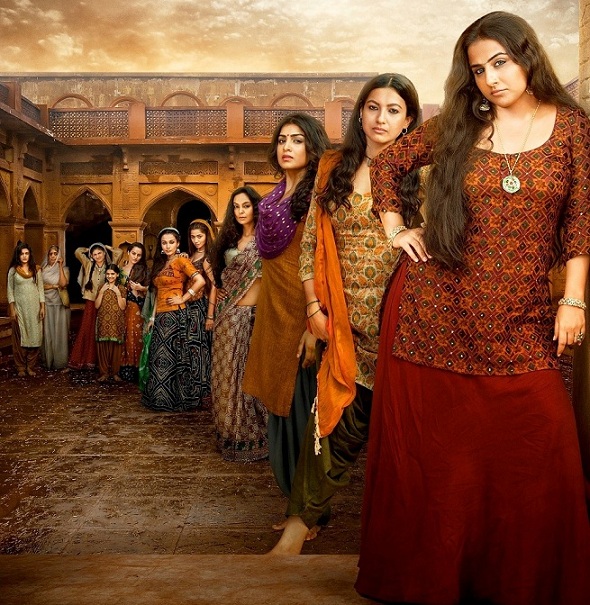 As India enters its 70th year of Independence, where Mahatama Gandhi’s non-violent battle to attain freedom for the nation finally concluded, national film award-winning director Srijit Mukerji’s fictional “Begum Jaan” discovers her ally in the form of armour and female solidarity in her own fight for freedom in Mukerji’s latest on-screen offering.

Based on Srijit’s own Bengali film, “Rajkahni,” “Begum Jaan,” played by Vidya Balan, is set in the backdrop of an India on the verge of division post the country’s independence. As the brash, hookah-smoking, eyes thickened with kohl, no-nonsense madam of an infamous brothel, host to some of the most prestigious visitors, including royalty, Jaan takes ten other women under her wing, who just like herself, have been victims of patriarchal suffering, and employ them as fellow prostitutes. Upon discovering that the Radcliffe line (devised by British lawyer Cyril Radcliffe who mapped out the divide of the country into two) runs right through the brothel, respective Pakistan and India officials Iliyas (Rajit Kapoor) and Hariprasad (Ashish Vidyarthi) are assigned the task of evicting the residents of this kotha. Fuelling resistance and anger amongst the women, thus begins the fight to save the place they call home.

The first half of the film is partly dragged down by a history lesson on India in 1947, coupled with Iliyas and Hariprasad in a moral table tennis match (and terrible cinematography)  of whether current circumstances forces them to remain friends or foe.  The audience is then presented with a cliché picture of “we are one happy family but bad ass bitches” as the women of the brothel celebrate sisterhood, with a silent acknowledgment that their livelihood is at the expense of their dignity.

The pace begins to pick up in the second half when the battle to save the sanctuary to these women commences.  Frequently faced with betrayal, even from each other at times, the narrative desperately wants to take the audience on a journey of a parallel freedom movement alongside the nation’s own crisis.

Unique as the story is, the film fails to leave the powerful impact it had the potential to as a result of loose direction and poor scripting. As Balan sits on her make-believe throne (i.e. her charpai) bellowing through rings of hookah smoke, “my body, my rules,” it’s impossible to miss the contradictory moment she forces the brothel’s new arrival, a former rape victim, against her will into having sex with the local Rajah, played by the talented (but wasted in this film) Naseeruddin Shah, who has boldly promised the madam and its residents protection from government officials.

“The Dirty Picture” actress, however, fitted the mold perfectly as this film’s main protagonist and is clearly one of the finest actresses India has today. Unlike her former cleavage-baring, booty shaking character sultry Silk, we don’t see Vidya frequently thrusting her bosoms for the sake of a man’s libido. Rather, it’s her ice maiden exterior, unapologetic demure and sultry vocals (courtesy of the legendary Asha Bhonsle) that draw in her male admirers. Gauhar Khan and Pallavi Sharda’s roles (although minimal) bring in the much-needed shades of gray and small doses of vulnerability within the story and evidently reflects how underrated these actresses are in the commercial cinema.

For me personally, the lack of depth within many of the characters is what causes the story to fall on its own sword. Amongst Vidya Balan’s tyrant of man hating abuse (trust me there’s a lot mother*** sister*** references) as a victim of consistent misogyny, a glimmer of remorse of endorsing women as sex on legs for a hefty price would have ensured at least some, be it little, empathy.  In the midst of gaining its independence, India at that point was still in a state of predicament, as the partition process gave way to violence and riots, and sadly many of the women of Begum Jaan’s “palace” as she proudly proclaimed, seem disconnected to the reality of the world beyond their four walls.

Gang rape incidents amongst Sikhs, Hindus and Muslims were historically unaccounted for as millions of residents were forced to leave their homes, yet the film’s director fails to represent the remaining female characters of the film with more emotion, even though some were direct victims of this debacle. Aside from a song and dance stint, in which the audience are exposed to a hint of a lesbian relationship between two of the girls, dueled with the lack of character build up, the uniform path from the bedroom to the border of their homes armed with rifles simply lacks conviction.

The international audiences it seems were also the recipients of a significantly censored version of the film, whereby the trailer held more promise than the final package. References to menstruation and scenes of the women uncomfortable “at work” had clearly been omitted to cater to a wider age range audience, but in doing so, lost the authenticity of the overall plot. This form of censorship only continues to spread hypocrisy with what the censor board feel is acceptable for viewing.  In a country where millions of girls have restricted access to clean sanitation, the topic of menstruation is still considered taboo.  Scenes of a sexual nature amongst the prostitutes and their clients, may have made for uncomfortable viewing, but with the right direction probably would have created a believable narrative and is highly likely to be much less vulgar than those movies whose content is 99 percent made up of distinct cheap references to male and female specific anatomies and sexual positions (a la´ “Grand Masti”)!

“Begum Jaan” had all the right ingredients for what could have been an epic story but left viewers with a slightly disappointing take on feminism.  If in 2017, cinema wants to embrace womanhood, both Bollywood and the censor board really need to stop underestimating their audiences and allow and encourage filmmakers to much more creative freedom.