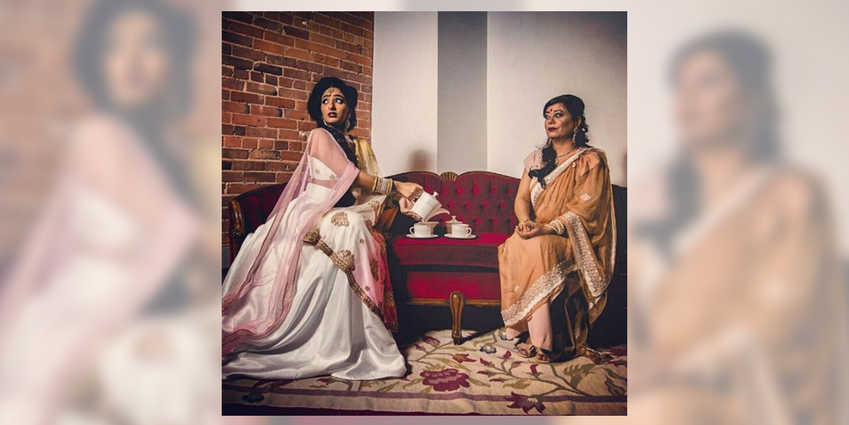 “I could win an Oscar for my creative work. I could be awarded the Order of Canada. I could even go on to be honoured with a Nobel Peace Prize. And the first question out of my aunts’ mouths would still be, ‘But when are you getting married?’ It’s as if a woman’s sole purpose is to be someone else’s wife, her entire existence validated the moment she gets married.”– Rakhi Mutta (Ms. Mutta Productions Inc.)

The above quote reflects Rakhi Mutta’s exploration of gendered social norms within the Punjabi diasporic context. It is the preface to an experimental performance exhibit, “The Good Indian Bride” that premiered in Toronto last year in an attempt to explore the “patriarchal subtexts of North Indian wedding rituals.”

Mutta’s unraveling of the good girl narrative within Punjabi marriage customs is one of a handful of projects that artist-activist women in the Punjabi-Canadian community are spearheading these days.  In fact, Mutta is part of a new generation of Punjabi-Canadian women who are using their art to redefine the concept of the ‘good Punjabi daughter’ and are thereby broadening narratives around identity, femininity, sexuality, and community.  Others include Rupi Kaur, Komal Minhas, Babbu the Painter, Superwoman and Kay Ray. This list is of course not exhaustive.

‘Good Indian Brides are meant to be seen not heard’. I envisioned an exhibit that would explore the sides of marriages that we dont often speak about. #thegoodindianbride Photo by: @flphotodesign Thank you to the team that helped put this exhibit together. @jadeleehoy @ruthtitus for bringing the space to life. @manikjassal for designing incredible outfits @banglez_jewelry for the breathtaking jewelry @ready.to.glow for brilliant make up – assisted by @roopantoor and @palette.artistry Incredible hair by @jyotibhair assisted by @face.deco The brilliant production team @_9knee and @bsinghh @nesa.ca Thank you to @daiscreates for providing us with space and such incredible support! Check out the website for more info www.msmutta.com

[Models/Performers at the Good Indian Bride Performance Exhibit in Toronto; audience members were told to try to interact with these women, despite their inability to talk for the duration of the installation | Photo Source: Instagram]

Models and performers at the Good Indian Bride Performance Exhibit in Toronto; audience members were told to try to interact with these women, despite their inability to talk for the duration of the installation.

It is well known among demographers, economists and international development professionals that the state of Punjab has one of the lowest child sex ratios in India, at 860 girls for every 1000 boys, according to the National Family Health Survey 2015-16. These disproportionate ratios have even traveled to certain places in Canada, as revealed by a 2016 study.

Among lawyers, authors and activists too, preference for sons in Punjab and within the diaspora has been no secret. Indeed, Punjab’s dirty laundry when it comes to gender inequity and violence against women has been airing out to dry for a long time.  What often goes unnoticed, however, is the incredible work that community members are themselves doing to creatively and courageously challenge harmful mainstream narratives around violence in the Punjabi community at the same time as disrupting the silence around these taboo topics.

Toronto-based Rupi Kaur’s “Milk and Honey“ has, for instance, beautifully transformed the written word into slices of diasporic experience, with poetry that strikingly reinvents Punjabi womanhood.  Her first reading took place in the basement of Punjabi Community Health Services, a community health center in Mississauga, Ontario. She writes:

“our backs
tell stories
no books have
the spine
to carry

Toronto-based artist Babneet Lakhesar (a.k.a. Babbu the Painter’s) recent collaboration with South Asian punk-artist Maria Qamar  (a.k.a. Hatecopy) on an installation titled “Bad Beti”  is another powerful example of subversive feminist art that attempts to re-write commonly-held narratives about daughters within the Punjabi (and larger South Asian) diaspora. “It’s natural, it’s normal. It’s okay to be bad. It’s fun to be bad,” Qamar said when asked about the intention behind her work.

Komal Minhas, Lilly Singh (a.k.a. Superwoman), and Kiran Rai (a.k.a. Kay Ray) are other dynamic women who are reinventing what it means to be a good Punjabi daughter.  Their combined work as film producers, actors, writers and YouTube sensations is contributing to an evolving counter-culture of Punjabi womanhood that one hopes will slowly but surely go mainstream.  From Komal Minhas’ work as a founding producer for Dream, Girl, to Superwoman’s  “Girl Love“ Movement, to Kay Ray’s direction of the online-exclusive short film “Kirpa” and stardom on the web-series, “Anarkali,” these women are imaginatively capturing, subverting and re-writing stories of gender inequity and violence against Punjabi women.

There are others too, and they continue to approach Punjab’s inconvenient truth in bold and creative ways.  I am also a Punjabi Daughter.  I may not self-identify as an artist, but I am an activist-researcher trained in the performing arts – in dance, theater and music – so I have always believed in the power of art to tell stories, change lives, and affect social change.

I grew up in Brampton, Ontario and I’ve always defined my Punjabi-ness (and my South Asian-ness more generally) in unique and non-conformist ways.  What’s more, I’ve never fit the socially constructed mold of the good Punjabi daughter nor have I ever wanted to. By this I mean that I’ve always tried to uniquely define my South Asian identity, straying far from the boxes that people have tried to place me in.  My femininity has also been shaped in complex ways by my upbringing – having been raised by a single mother, intellectually shaped by a Marxist father, and being one of three fiery sisters.

When my Punjabi identity gets infused with my love of the arts, I feel a whirlwind of emotion; the possibilities that exist to create, to deconstruct, and to redefine the parameters of what it means to be a girl, a woman, a daughter within the Punjabi community are so exciting. During turbulent times, when son preference and violence against women continues in India and internationally, and when discrimination against ‘other’ people and cultures within the diasporic context is at an all-time high, being surrounded by the strength, passion, and resilience of young Punjabi women at home in Canada is inspiring. It motivates me to keep telling stories, to keep advocating for change, and to keep breaking the mold of the ‘good Punjabi daughter’ in my own life.  That is, of course, where the real change happens.

Amrita Kumar-Ratta is a lifelong learner, a passionate traveler and a self-proclaimed transnational feminist activist. She holds a Master’s Degree in Global Affairs from the University of Toronto and works at the nexus of human rights and social inclusion. She adores social policy research, loves to ask hard questions and is a firm believer in “thinking globally, acting locally”. She finds her self-expression in dance, literature and theater.