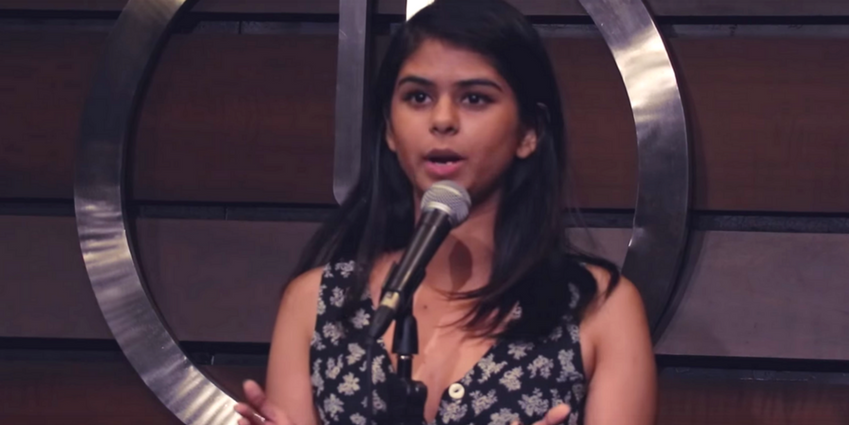 A powerful spoken word performance went viral when a student spoke out about the harassment and sexism women face every day.

Eighteen-year-old Aranya Johar from Mumbai gave her performance at an UnErase Poetry event in March for Women’s Day. The performance titled “A Brown Girl’s Guide To Gender” has not only been viewed hundreds of thousands of times but shared and applauded on all forms of social media.

At the UnErase Poetry event, Johar spoke about how women are silenced, “boiled down to [a] sexual interaction,” faced with sexism in the form of clothing and double standards. She mentions how men get uncomfortable with women’s bodies and discussions of periods.

Johar’s latest performance began with an anecdote referencing her first encounter with a boy and misogyny.

“The first boy who held my hand told me boys don’t want to hear about vagina’s bleeding. Vaginas are only meant to be f**ked,” she said.

The inspiration for her piece came from bonding with her friends over their experiences with assault and harassment, following the Nirbhaya rape case and the story of Laxmi, an acid attack victim.

Johar not only runs the performance startup More Than Mics but also co-curates several open-mic events in Mumbai, including Blind Poetry Sessions, which differs from other poetry spaces, as it takes place in a dark room, with anonymous poets.

“It’s a challenge to the artists because they cannot read from their notebooks here. Also, nobody can judge their work on the basis of looks or age, since nobody can see their face. Audience members are given glow-in-the-dark sticks, and they wave them to show their appreciation,” Johar told the Hindustan Times.

With Johar’s YouTube and poetic successes, she has started to receive many responses praising her performances, an act that surprised the young writer.

Johar thought the problems she mentioned would not resonate as deeply with other audiences as they would in India.

In her poem, Johar called for her male friends to support her stating, “So I ask my male friend to drop me home because his privilege will protect mine.”

While a few men felt her poem were exaggerated, other men have reached out to ask how they could help, Johar told reporters.

”There was never a comment thread where I had to justify myself because other people were doing it for me,” she said.

Johar has two upcoming performance pieces, one titled “Goddamn Millennials” where she talks about the upsides of being a millennial and the second titled “Tea Time with Depression,” aims to make people aware of the signs and solutions to the mental disorder.

In the future, she hopes to continue creating awareness of social and stigmatized issues in society by means of education.

“I would like to pursue psychology or literature at degree college. I feel we ignore the importance of mental health. Poetry is my way of starting a dialogue,” Johar told the Hindustan Times.

Watch the performance for yourself and tell us what you think of “A Brown Girl’s Guide to Gender.”