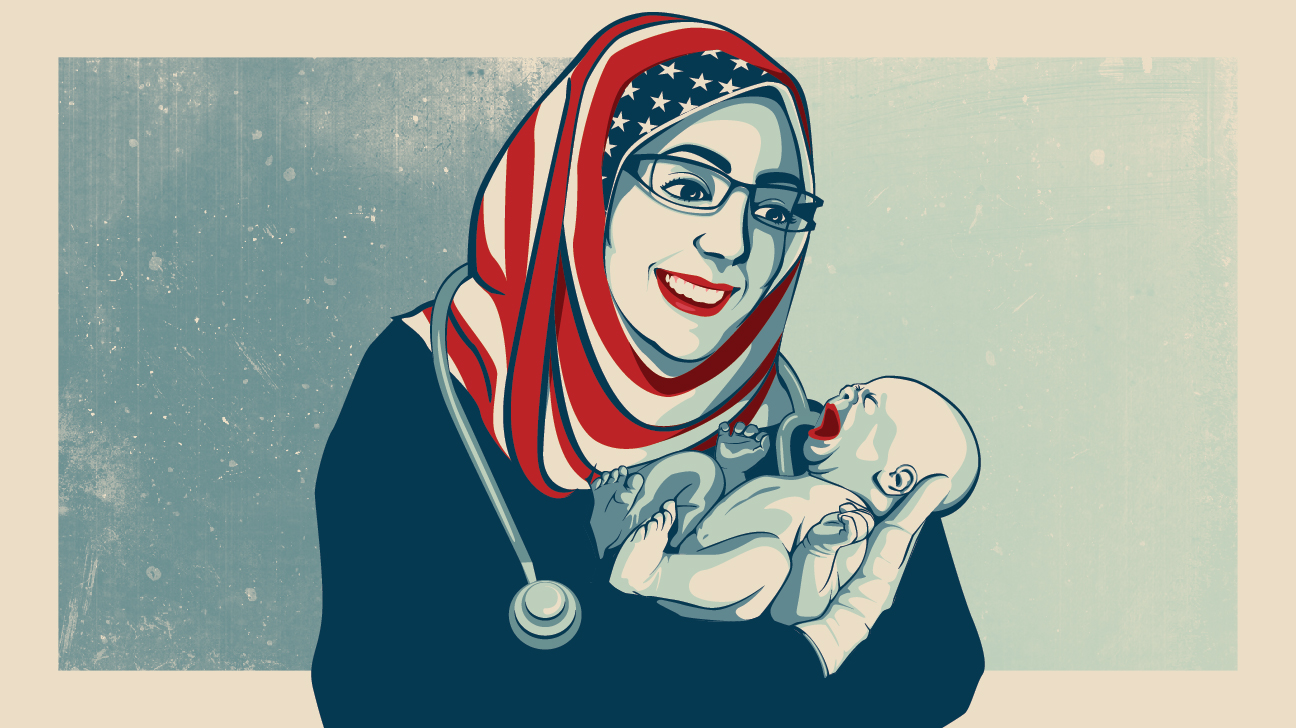 The following post was republished from Healthline with permission from the author.

From the time she was a child, Malak Kikhia was fascinated with pregnancy. She says,

“Whenever my mom or her friends were pregnant, I always had my hand or ear on their bellies, feeling and listening for the baby to kick. And I asked lots of questions.”

Being the oldest daughter of four, she also took on the big sister role in full force by helping her mom care for her sisters.

“I always loved babies. I had a play nursing kit in the 1980s, with a stethoscope, syringe, and Band- Aids, and I would play with it with my dolls and sisters. I knew in my early teens that I wanted to be a labor and delivery nurse.”

It was a dream she made come true. Now a labor and delivery nurse in Georgia, Malak has helped deliver over 200 babies and counting.

“It’s true what they say: If you find a job you love, you never have to work a single day in your life.”

Laughter in the delivery room

Malak is a first-generation Libyan-American. Her parents migrated from Benghazi as students in 1973 to attend the University of Santa Barbara. During that time, they had their first two children — including Malak — before the family moved to Columbia, Missouri to attend the University of Missouri. Malak spent most of her childhood there. When she got married in 1995, she moved to Georgia.

Working in the South, most of the patients she sees aren’t Arab or Muslim. Though she wears a scrub cap during deliveries, her employee badge proudly displays a picture of her wearing a hijab. 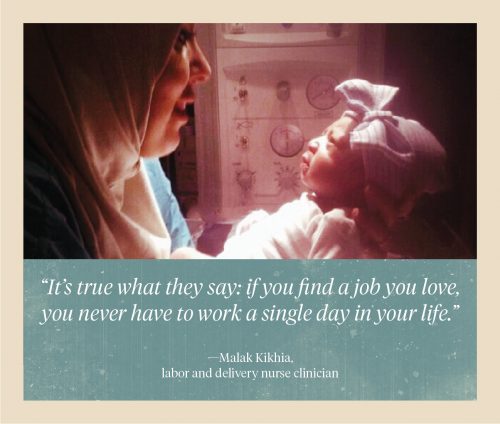 “I never hide that I’m a Muslim. In fact, I always bring it up to my patients so they know this funny, normal lady is a Muslim.”

They may even get a peek of her purple-dyed hair under her scrub cap.

And Malak says she’s had hundreds of positive experiences with families.

“I try to lighten things up and make moms feel less anxious. If I see that a mom is nervous, I may say, ‘So what’s going on here? Are you bloated or gassy or constipated?’ They laugh and it breaks the ice.”

Malak says she receives many Facebook messages from patients thanking her for making their birthing experience a positive one.

“When I delivered my 100th baby, I got permission from the family to post a picture of her and me on social media, and it kind of went viral. When my past patients saw the picture, they started commenting on what number their babies were! It brought tears to my eyes.”

Changing perceptions of what “Muslim” means

As upbeat as she is, Malak admits that she has experienced prejudice on the job, both directly and indirectly. The most outright occurrence came fresh out of nursing school when she was working at a dialysis center.

It was located in a suburb of Georgia that wasn’t very diverse, and she wore her hijab on the job. She recalls several men stating that they didn’t want an Arab taking care of them.

“One particular gentleman made it clear that he didn’t want me taking care of him because I am an Arab and a Muslim. He said he felt unsafe and told me, ‘You just never know.'”

Malak coordinated with her colleagues to make sure he was properly cared for whenever he was at the center, but when her manager noticed that she never took care of him, she confronted Malak.

“She looked me dead in the eye and told me: ‘You’re a fantastic nurse. I trust you. And you took an oath in nursing school that you’d take care of all patients no matter what. I have your back.'”

From that point on, Malak starting taking care of the man.

“He complained at first, but I’d tell him it was me or a long wait for another nurse to be available. He’d huff and puff.”

But she stayed professional and accommodated his attitude until something quite unexpected happened.

“Eventually, I became his favorite nurse and he’d only ask for me to take care of him.”

As their relationship developed, the man apologized to Malak, explaining that he was misinformed.

“I told him I understood and that my job is to show Americans the positive side of the American-Muslim.”

Being a Muslim mom in America 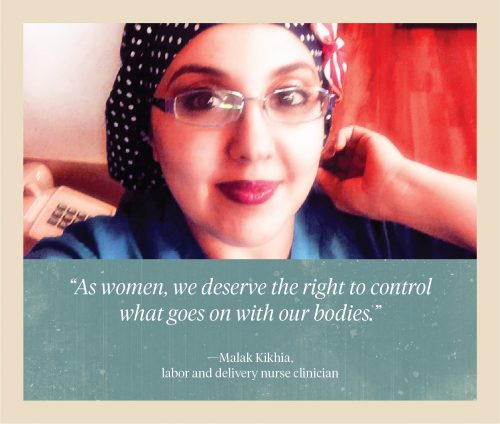 Malak is not just a nurse helping new moms bring their babies into the world. She is also a mother herself, with three sons and two daughters. They’re all American-born citizens like her, and all being raised Muslim.

Her twin sons are in high school, and her daughters are 15 and 12 years old, while her oldest son is in college and the Army National Guard. She recalls:

“He wanted to join when he was 17. I was shocked. I don’t understand the military and all I could think was that he was going to war. But he’s a strong man and proud of this country like me. I’m very proud of him.”

While Malak raises her daughters with Muslim principles, she also raises them to be comfortable talking about female issues and sexuality.

“Since they were young, they were taught the word vagina. I’m a labor and delivery nurse, after all!”

She also raises them to make their own choices, such as whether or not to wear the hijab.

“As women, we deserve the right to control what goes on with our bodies.”

“I don’t make the girls wear the hijab. I think it is a commitment, so if they decide to wear it, it’s something they have to commit to wearing. I’d rather they wait to make that decision until they are older.”

Not only is Malak working to shift perspectives and preconceptions as a nurse and mother, she is also helping to bridge cultural divides in other ways. As a Muslim woman working in women’s health, she is in a unique position, sometimes helping other Muslim women navigate new terrain when it comes to healthcare.

Recalling one of many instances where she was called in to consult on a delivery for an Arabic-speaking woman experiencing complications, she says,

“In our culture, female issues, such as your periods and pregnancies, are considered very private and not to be discussed with men. Some women go as far as not talking about these issues with their husbands. They had a male interpreter talking to her over the phone, telling her to push out the baby, but she wasn’t responding.”

“I understood her hesitation. She was embarrassed that a man would be telling her something about her pregnancy. So I got in her face and told her she needs to push the baby out now, or he will die. She understood and began to properly push him out safely.”

“She had a false labor but then came back, and I did deliver her baby. It’s connections like these that are rewarding.”

Whether she is bringing newborns into the world, teaching her daughters how to be comfortable with their own bodies, or changing perceptions one patient at a time, Malak is well aware of the concerns — and the enormous possibilities — of being a Muslim nurse in America.

Outwardly, I am a Muslim woman wearing a hijab… I walk into a public place, and it’s dead silent with everybody staring at me.”

“On the other hand, as a labor and delivery nurse, Malak is pursuing her dream job and connecting with people during some of their most intimate, happy moments. And it’s in those moments that she accomplishes something vital — she builds bridges.