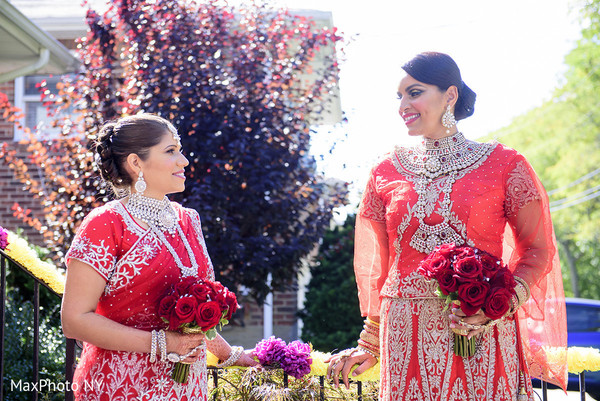 For LGBT+ Pride Month, BGM is excited to feature Tricia Prettypaul and her wife Stephanie Alvarado. We talk love, family life, and politics with the young couple. Check out our interview and their beautiful wedding photos that were featured on Maharani Weddings.

We met online and had our first date on August 29, 2012. Stephanie must’ve realized about a month in… she said it in her sleep! Tricia about two weeks after. She needed time to tell me in a really sweet way, I think she knew since the second date!

What was it like telling each other’s parents? Were both of you guys out before you met each other?

TP: I introduced Stephanie to my mom on my birthday–a little over a year after we met. My mom was awkward but welcoming. She was never formally introduced to a girlfriend and it was the best intro I could’ve hoped for. I was out a few years before we met. After coming out to my dad, he refused to talk to me. We haven’t spoken in years. Although we email, the only conversation we had specifically about Stephanie was very negative. Since then, we really haven’t spoken.

SA: I came out to my parents a couple of years before meeting Tricia. At the time I wasn’t dating anyone, so they were in denial for a while. When I told them about Tricia, my dad was cool with it, but my mom freaked out a bit.

When did you guys realize each of you was “the one?”

TP: I realized Stephanie was the one when she met my family and charmed the hell out of them. I had no choice, but to marry her.

SA: When I got really sick and Tricia took care of me.

How was it like introducing each other to your respective families? How did your families take it?

TP: I introduced Stephanie to my cousins and siblings first, then aunts and uncles. They fell for her instantly. She has a really engaging personality and can laugh at herself. Even though she is from a different culture, she embraced our traditions, culture, and foods and I think that went a long way in getting people to instantly like her. Mom asked that we go out to dinner to really get to know each other. At that dinner, she gave Stephanie a gift. I was floored! I think mom was impressed with how much the rest of my family liked her. Since then, my mom takes Stephanie’s side over mine every time. Even when I’m right. (looks sarcastically at Stephanie)

SA: Unfortunately, when it comes to my mom, my being a lesbian and being with Tricia continues to be an issue and a source of conflict. She didn’t attend our wedding. Fortunately, my father, brother, cousins, aunts, and uncles were really supportive of my coming out and of my relationship with Tricia. Even though she wasn’t Latina, Tricia made an effort to speak Spanish, dance our music, and put up with me dragging everyone to karaoke. (smiles)

What’s your favorite thing about each other?

Is hard to be an out couple in your respective ethnic communities? How is it like to be out in our society, in general?

Yes and No. We are very lucky to be surrounded by supportive family and friends within the West Indian and Latino community. However, being Caribbean/Hispanic and part of the LGBT+ community, there is always a source of conflict particularly with the generational divide. We have some awkward moments, but generally, we’re okay. We try to live our lives and try not to worry about the older generation who hasn’t caught up with being at ease with the LGBT+ community. Being out in society we are always vigilant. There are always people who will make comments. However, living in New York is a blessing. We know we don’t deal with some of the homophobia of communities with less exposure to gay people.

How do you both feel about the current political climate on LGBT+ issues, especially the politics of marriage, adoption, and other related issues?

The current administration is a huge threat to all minorities. There will always be officials, even our President, who do not support our community. That will never stop. We feel positive about the progress of the law and state/federal protections for sexual orientation minorities and are happy that we won the right to marry across the country two years ago. However, there is still a lot of work to do.

In many states, LGBT+ Americans can get married today and fired tomorrow. It is legal in these states to be denied services or get fired for being gay. Living in New York is a blessing. Our local government is supportive about providing protections against this. We know we don’t deal with some of the homophobia of communities with less exposure to gay people. The only thing we can do as a community is live openly, honestly, and never stop fighting for equality. The LGBT+ community slogan–it get’s better–is our mantra.

What are the positives and negative things ya’ll have experienced as an out couple?

The positives are being accepted and championed by our co-workers, family, community and peers. For all intents and purposes we live a fairly normal life. We got married, bought a house, and get the same questions that all couples get… when are you having babies?!?!

The negatives are who continue to view our relationship as wrong make awkward comments such as “who’s the guy in the relationship? Why don’t you both cook, you’re two women?” (We can’t boil water) Plus, we are never really free to be a regular couple. For example, holding hands gets a lot of stares, when we travel, we probably wouldn’t do that unless it was a very gay-friendly country. We are avid travelers and have to do research on countries’ openness to the LGBT+ community before traveling.

Even still, we’ve experienced awkward moments. We went to Curacao on our first trip away as a couple. At dinner it was clear we were together and we signed for dinner using our room number. When we got back to our room, someone called our room and asked if he can do anything for us and if we needed them to come help with anything. It was midnight and super creepy. We don’t know if it was someone who worked in the hotel restaurant or another guest staying at the hotel. We filed a complaint with the staff the next day and they apologized, promising to investigate.

What’s one thing you’re are most thankful for in your marriage?

TP: I’m thankful that I found someone who finds me funny. Like the funniest person in the world.

SA: I’m thankful that all I have to do is laugh at her jokes and she’s happy. They’re not that funny, but it’s probably the easiest way to make her happy. That’s the only easy way!

TP and SA: We both have different personalities, but we complement each other and provide support to each other.

How is it like with gender roles in your marriage? Do you have roles for each person?

We do not have gender roles. We both have no idea what we are doing. (both laugh)

How did the Supreme Court ruling on gay marriage affect ya’ll’s relationship?

Same-sex marriage was already legal in New York, so it didn’t affect our ability to get married. It allowed us to receive federal protections and benefits allotted to married couples. The greater effect is how the legalization of same-sex marriage changed the perception of gay couples getting married and legitimized that all love is equal.

What are some crazy, interesting, funny, and appalling things people have said to both of you?

A co-worker became close to me and felt open to talk about his personal feelings on politics. When marriage equality was coming to New York, he came into my office and was riled up about changing the definition of marriage. “How can they do that?!?” I stopped him before he said anything too much more insulting and said we would definitely have different opinions on this issue. He asked why, and I said because I’m gay. He fell silent for close to one full minute, backed out of my office slowly, and proceeded to ask others who were close to me in the office if it was true–as if I lied to him. He was appalled to find out everyone had known for years and they were all quite surprised he didn’t know. He’s an awkward guy. We’re still good friends, but my sexual orientation continues to cause friction and debate.

I often get asked some of the following questions: Don’t you think you just haven’t met the right guy? Can I join you two? While checking into a hotel room: “You booked a king sized bed, would you like 2 Queens?”

At the airport we get questions about being married that are probably not what other couples get asked. There’s always a sense of having to prove ourselves as a legitimate couple in almost every aspect of life. We anticipate this won’t change even as the times change.

Is there anything else either of you want to tell me?

We are generally private people. We know it’s not easy for gay couples, especially in our community to be out openly and to have a wedding with their family and friends. We wanted to be visible with this aspect of our life. Visibility is really important in our communities. Showing our respective communities that we exist as open and happy is really important to making people know we exist and to change the perceptions that people have about us.

*Some parts of the interview have been edited for clarification.