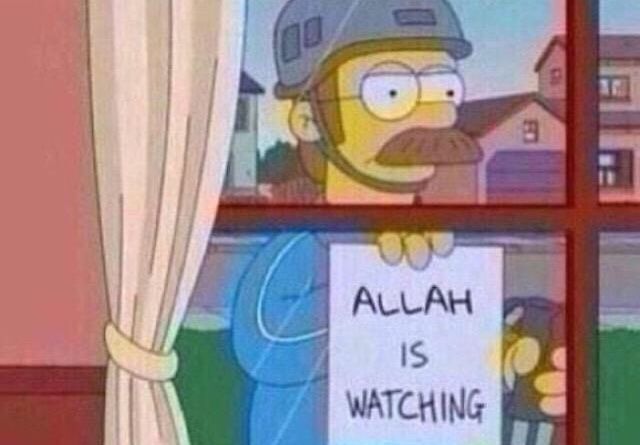 One of these pictures happened to be from a banquet I attended with my best friend. Teal dress. Knee high length. Sleeveless. I was also pretty “blessed” in certain areas. This picture went viral and the haram police came. I had already considered myself agnostic long before this. I was receiving death threats for months after it seemed like. A lot of “you’re not a real Muslim” “your mother is probably so ashamed” “Allah hates you” — everything.

None of this is new to me.

My parents never had time to sit down and teach me stories from the Quran or even teach me how to pray. They were too busy trying to make sure that my siblings and I had food on our plates. My brothers never had the time either, they all worked full-time jobs and went to school full time as well.

I never doubted my place in Islam when I was younger. I was loved and I was taught how to love. Islam was that to me. My mother would tell me that taking care of plants and animals is part of Islam, and if I help her water the plants then Allah would be pleased with me. She said if I’m nice to my brothers and stay quiet while they study, Allah would help them pass their classes.

[Read More: “‘How to Be a Muslim’ by Haroon Moghul Redefines What it Means to be an American Muslim Today“]

At night, my mother told me stories of birds, I saw Allah in that. I asked her about heaven and she told me I would have my own Pikachu and as many cats as I wanted to. That’s all I needed to hear. And that’s the last time I imagined heaven.

When I was 10 years old, a girl started questioning if I was ‘really’ Muslim. She saw me talking to a classmate who happened to be a boy. She shared what she saw with other girls from the masjid. Word spread and I was known as the fake Muslim.

I remember I wore basketball shorts to six flags once. It also happened to be Muslim Day. A girl from my masjid saw me and told everyone how I’m not Muslim because the length of my shorts decided that. I was 13.

Rumors started spreading at a vicious rate. (Hey smartphones.) Somehow I eventually became the girl who sucked dick behind the masjid. I learned this from a guy who I had never met, right before he asked me if I was “down to come over and f*ck :-).”

I didn’t have many Muslim friends growing up, and the ones I did have questioned my faith constantly. I tried to tune out their opinions and not care what others thought, but it didn’t work.

When I was 16, I declared myself as agnostic. My friends told me I was dumb and faithless for even considering it.

I kept walking further away from the faith I was born into, the faith my mother kept so close to her heart. I didn’t want to tell her that I don’t like Him anymore. And I didn’t think He liked me very much either.

Islam was magic to me because of how simple and beautiful my mother made it.

I was 16 when I was being harassed on Tumblr. A girl from Toronto, a hijabi, someone who’s account name might as well have been imyourangel786 messaged me. She brought more of her friends and they were all messaging me. They told me how beautiful I looked in my dress. They complimented me. They would read my Tumblr and relate with my cat posts. They made me feel accepted.

I was 20 when I learned how to pray properly. I’m starting to see Islam as magic again. I still don’t know every story about the Prophet (peace be upon him). I still struggle with the Arabic while reading Quran. I still wear sleeveless shirts. I still talk to boys. I still sin. But I learned how to repent.

I’m growing. My faith is getting stronger. I even teared up for the first time while praying because of the connection I felt with Allah Last year, I never thought this would happen to me. This is the closest I’ve ever felt to my faith. I don’t blame anyone for my disconnect with God. I ask Him for forgiveness every day.

Sometimes, I don’t believe myself. I still think of everyone who has called me a kafir (disbeliever) or told me I’m not close enough to God for their standards, and I doubt myself. What if someone catches me in the act? Am I even praying correctly? Am I Muslim?

I hope I’m Muslim enough for myself one day.