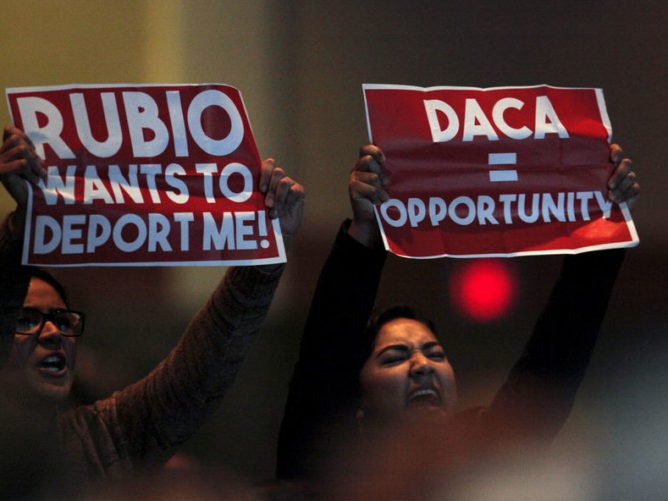 They used to say, growing up in the United States was a luxury, and life would be better off here than overseas. I was born a U.S. citizen, to immigrant parents from England. My parents instilled values in me while I was growing up to always stay true to my Indian culture, but pride myself as an American citizen. I never really understood the true meaning or importance of how lucky I am to be an American, until recently.

Being an American, we pride ourselves on being “One Nation Under God.” Every day, I see this statement to hold less truth than the day before. I am a law-abiding citizen. I have never been arrested, never been to jail, and never been, for lack of better words, in trouble. However, according to the government, the mistake I made was falling in love with someone who was not a citizen. How is that “One Nation Under God?”

I fell in love with someone who happened to not be an American citizen. Much like my parents, he has spent most of his life in the United States, however, according to the U.S. government, he was not eligible to gain citizenship due to his age. According to the government, this is his fault.

Being admittedly ignorant, when I first met him, I was hesitant to date him due to the whole “green card scandal” you hear about in the movies. However, after hearing about his journey, and knowing my own parent’s immigration background, I realized I was no better than the government, for judging him based on his birthplace. It’s simply out of his control.

Learning about how my husband was turned away at the age of 18, due to being “over the age limit” makes me angry at the idea that WE Americans, pride ourselves in saying “coming to America brings a brighter future.”

My husband migrated with his family on a diplomatic visa when he was 13 years old. He was able to complete his high school and college education, before having difficulty renewing his visa. Something went awry, and his visa was denied. Luckily, Obama had initiated the DACA (Deferred Action for Childhood Arrivals) program, which he was able to apply to and obtain. If he had not received approval for DACA, he would have been deported.

Imagine a 21-year-old young adult being asked to “go back” to a country he never knew. My husband was a son of a diplomat, meaning he never spent more than 3 years in a given place, other than the United States of America, where his father chose to settle and retire.

Every two years, as a DACA recipient, you are required to resubmit an application for a work permit and application for the program itself. As a recipient, you still hold no status in the United States, meaning you could still get deported. Like I said, I was ignorant going into this relationship when it came to immigration. I never understood the toll it takes on a person emotionally until I met my husband.

[Read More: “#WeDoBelongHere: Why I Celebrate Both Sides of My Culture“]

We would sit for hours and talk about how he would fear getting pulled over, because that’s a violation of DACA, and he could risk deportation. Or about how life was difficult in general because he was an undocumented immigrant. I could see the pain in his eyes, as he told me stories of how people looked at him differently and treated him differently due to his citizenship status.

I thought, once we got married, everything would be easier, I was wrong. Once we were legally married, we went to visit an immigration lawyer to see what our next steps would be. We were informed that the process was simple: apply for green card, pay fees, go to an interview. Simple, right?

What they don’t tell you is that it took us three months for his work permit to get in, which could have risked his job and our financial security. Luckily, his previous work permit was still active. In addition to that, we didn’t obtain our interview date until 11 months later, after the Trump administration had implemented all the travel and deportation bans.

My husband travels for a living, as a consultant. As a wife, watching the news and hearing about people getting racially profiled, being selected by TSA officers daily, that are from countries not “on the travel ban list,” it tends to instill fear in your mind. I would spend my mornings anxious and terrified that my husband was going to get “pulled over” or “profiled” because he looked a certain way or simply because he was brown.

According to the Trump administration, DACA recipients would not be targeted, however, a few weeks ago, there were several news stations reporting deportation of DACA recipients, who had no trouble with the law. You can imagine the relief I had, knowing that we had just been approved for our green card.

As a daughter of immigrants and an American married to an immigrant, I’ve realized that the nation I once proudly looked up too, has not only let me down but let those I love down. America is known to be the land of dreams, and people migrate to America to live out their “American Dream.”

But what is an “American Dream,” when we are building walls up to keep out those who have helped influence U.S. history so majorly, and deporting others we can’t understand due to lack of education and ignorance?

I am a South Asian American who is proud of her family, and proud of where she came from. My skin color does not define who I am, however it shapes the person I am today. The journey my husband and his parents have gone through is one of many, those left without a voice.

Here’s to all those who are too afraid to share their experience in fear of deportation, to those lost by circumstances beyond their control, and anyone and everyone who’s ever been looked at a certain way for being different. This one is for you.