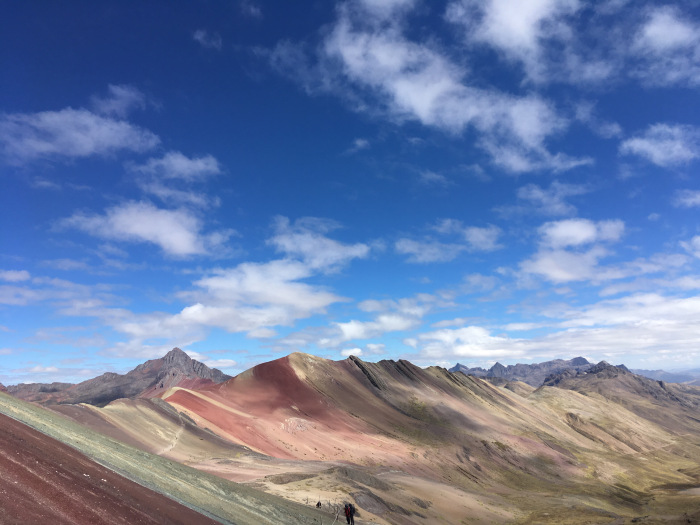 I’m back and talking about another experience I had in Cusco! The city is full of opportunities for unique day trips and Rainbow Mountain is not an exception to this; it is truly worth the early morning wake-up call.

Rainbow Mountain, or La Montaña de siete colores, has become more popular for tourists in the last year or so. Prior to this, heavy fogs would set over the mountain and it was difficult to view the amazing array of colors. Now, locals and tourists, alike, make the trip to Rainbow Mountain as a social outing and there are tour agencies that take you to the base camp every day.

[Read Related: The Perfect Pursuit of Adventure In Beautiful Peru] 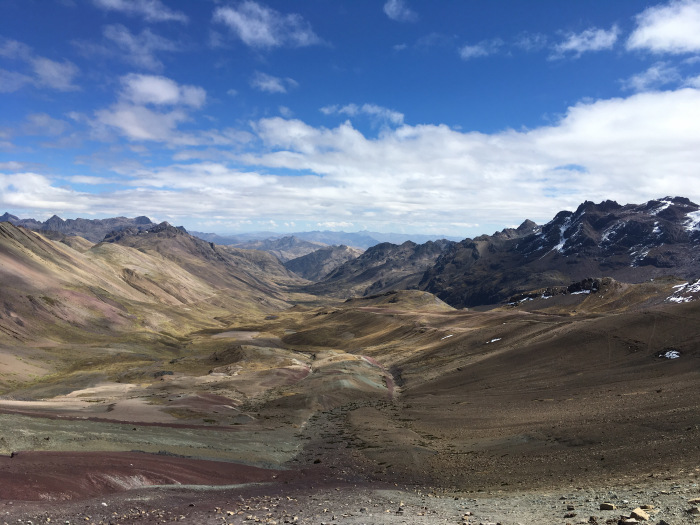 Once I booked the tour with my volunteer organization, we were required to meet in Cusco’s city center at 5 am. The shuttle bus picked us up in the plaza and drove three hours near the small town of Hanchipata-Quesuno. We had breakfast here (which was also a part of the tour!) filled with hearty eggs, bread, marmalade, and of course, the infamous coca tea to battle the altitude of Vinicunca, where our trek would begin up to the mountain.

Tour companies suggest that tourists spend some time in Cusco before attempting to complete the rigorous hike up to the mountain. Cusco is already at a high elevation, but Rainbow Mountain is up even higher (between 4710 and 5200 meters!) and causes severe altitude sickness if the correct precautions aren’t taken!

I began with a slow and steady hike up towards the mountain, passing people along the way, vomiting and clutching their upset stomachs (eek!). Most of my tour group was behind me, using the aid of hiking sticks to help them move along the treacherous trail; going out the night before, and getting only 2 hours of sleep, was not the best decision before the hike, so after 1/3 of the way up the trail, I decided to opt for the horse. I had taken one on a 5-day hike to Machu Picchu and it had given me ample time to enjoy the landscape around me without stopping every five minutes to huff and puff. Most of my tour group chose the same option as well. I flagged down a local and rented his horse for the next 45 minutes, taking pictures of the scenery around me and appreciating the strength of the horse that so gracefully carried my weight.

The horse and its owner didn’t take me all the way up to the destination, but like most, they dropped me off at the bottom of the last steep incline before Rainbow Mountain. Although the hike up this steep incline was probably a total of 1000 feet, it took me at least 15 minutes to get past it. This time, I was huffing and puffing after every two minutes. Never underestimate the altitude and its effects and do as the locals tell you to!

Fortunately, I had already spent six weeks in Cusco, so my body was more than used to the altitude and the low levels of oxygen. I didn’t get a headache or an upset stomach (which is a great victory when half of the tourists around are clearly suffering physically); waiting to do this hike towards the end of my time in Cusco was one of the best decisions ever.

The top of Rainbow Mountain was breathtakingly beautiful. The colors, especially the reds, greens, and blues, clearly stood out and could transform even the worst of photographers into experts. The surrounding hills and mountains also proudly revealed their pastel colors, which shone brightly under the brilliant Peruvian sun. 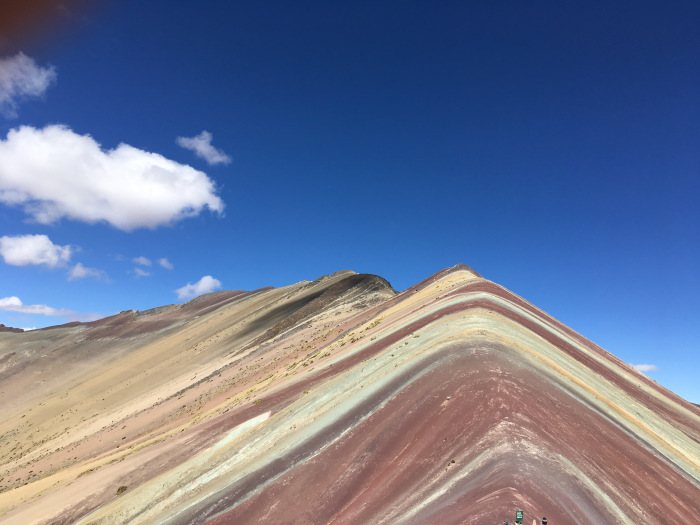 The hike back down only took one hour, (as opposed to 2-3 hours uphill!), and the view of the nearby mountain, Ausangate, with its snow-capped peaks was marvelous. Ausangate is one of Peru’s tallest mountains (at 6372 meters) and tour companies also offer many treks to this area on a daily basis. If your body quickly adjusts to high altitudes, Ausangate may be the right choice for you!

A late lunch buffet in the same village that we had breakfast in, was also included in the tour. It was a perfect addition to my growling stomach. What better way to relax after an intense hike than to stuff your face with authentic and mouthwatering Peruvian food?