“How I cherished those mornings,” Dimple’s father says, confessing how much he misses them. “It’s just that when you got so busy, with school, your friends, your life,” he goes on a bit later. “And now you are all grown up…I suppose that’s what happens; it is only natural, especially in America. But it’s funny—if someone had told me before we left India that I might lose my daughter even more quickly in the process, I would not have budged one inch.”

There are a thousand scenes from Born Confused worth spending an essay on for the fifteenth anniversary of its publication. Scenes that cracked me up, made me think, made me want to scream in frustration (Oh Gwyn!), or that made me laugh until I couldn’t breathe (the pot-smoking one will always be one of my favorite scenes in all of YA, when Dimple is high, philosophizing, and under the bed). Then there are the umpteen, unforgettable, enviably romantic moments between Dimple and dreamy Karsh.

But the one I quote above is the one I always come back to.

Dimple’s relationship with her father killed me, still kills me. I couldn’t even quote it here without getting weepy. I am sniffling as I write this.

In Dimple’s constant struggle with her parents, to be both American and Indian, to somehow reconcile these two parts of who she is, Tanuja captures something deeply painful and complicated about the lives of so many families, where old-world parents are trying to raise children to be American in ways they never were and never will be—while at the same time somehow holding their children back from the ways that American life scares and upsets them. Most scary of all, of course, is the part where children “becoming American” rises like a wall that parents don’t know how to scale. As Dimple’s father expresses so movingly, raising Dimple in America meant he’d lose her that much more quickly.

Tanuja draws out the hilarity in the conflict between the old world and new—because it really is the stuff of comedy—but never loses the poignancy of it. There is such sadness in this conflict, in the way that immigrant and first-generation families want so much for their new American children, all the opportunities they never had, yet at the same time, in working so hard to give them these opportunities, risk losing them outright; risk not recognizing themselves or their rituals and culture in their own children.

“The family’s quiet was partly due to the fact that, as we children learned more and more English,” Rodriguez writes, “we shared fewer and fewer words with our parents…After English became my primary language, I no longer knew what words to use in addressing my parents. The old Spanish words (those tender accents of sound) I had used earlier—mamá and papá—I couldn’t use anymore.”

For Rodriguez, his American education made him into the revered intellectual his parents dreamed about, while at the same time was responsible for the great tragedy of his life—the loss of understanding, of communication, between himself and his Mexican parents.

I am not Indian-American, like Dimple (and Tanuja), or Mexican-American like Richard Rodriguez. But the tragi-comedic conflict between old and new world is familiar, funny, and nostalgically painful to me, as well.

My mother’s family immigrated from Italy and my father’s from São Miguel in the Azores, an archipelago in the middle of the Atlantic Ocean that belongs to Portugal. My parents had such particular expectations for what I would do with my life. I would go to college (my father didn’t, my mother did). I would be an accountant because everyone needs accountants. I would get a job, then meet a nice young Italian or Portuguese Catholic, then get married, then have babies. My parents wanted me to have the life they never had but that they’d wished for and that their parents had wished for them. Their lives were hard when they were young and they were hard when they were older, too.

My parents were strict in a way that perhaps only parents from immigrant and first-generation families can be. They were terrified of everything. Terrified I’d do drugs. Get pregnant. Kiss a boy (which would likely lead to pregnancy). Get a B+ in school (which would likely ruin my entire future and then all would be lost). Make a friend that would lead me into drug-doing and/or pregnancy-getting. Become an artist (artists don’t make any money). Stop believing in God and going to church (which would, of course, end in pregnancy).

When I pressed against their fears and their hopes, the drama was like something out of a sitcom. Italians are loud and my mother was no exception. She could guilt-trip you like a master. She’d pray to her saints for my obedience, for my salvation, for my grades, for my continued state of non-pregnancy. I would go off to my room, or to wherever I could get away, cursing her existence.

But my father was and is still the silent type. My mother and I would scream and fight, I would call all of her rules insane and unfair, and my father would shuffle into my room, later on, sit down on my bed and say,

“You know it’s because your mother loves you. We both love you. We just want the best for you.”

My father was quiet but quick with the hugs, the willingness to go swimming on the beach, or take me for forbidden plates of nachos piled high with chili and cheese that mom wouldn’t have let either one of us eat. With my father, I could feel the intensity of their yearnings, that their hopes and dreams rested on my ability to live what they didn’t. I could see the sadness and confusion about how, the more I pursued such things, the more difficult our relationship became. I wanted to please him, please them, so badly. I wanted to make them proud. I think, most of the time, I just confused them by my choices—choices I was able to make because of their sacrifices on my behalf.

I’ve spent much of my adulthood trying to cross the distance that opened between my parents and me as I grew up into a world they’d wanted for me, but weren’t really a part of themselves. Dimple’s relationship with her parents, but with her father especially, embodies that dissonance. Their struggle to somehow reconcile it, despite everything, is expressed more vividly and honestly than perhaps in any other novel I’ve ever read.

But for that one moment I quoted above, as Dimple is seeing her father with new eyes, noticing the gray in his hair, how he is getting old, they manage to find a way to be both old and new, before and now, somehow crossing that seemingly impossible distance to find each other again. It is a moment of beauty, of hope, of understanding. A big long wish for so many families who know that divide all too well.

In that moment, Dimple finds that she wants to cry. As always, whenever I read that part of Born Confused, I do, too. 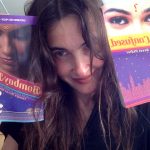 Donna Freitas is the author of eight novels for children and young adults, including The Survival Kit (FSG, 2011), named an ALA Best Books for Young Adults and the winner of the Bookstar Award in Switzerland, and This Gorgeous Game (FSG, 2010), also named an ALA Best Books for Young Adults, a winner of the CCBC Choice Award, and a Chicago Public Library Best of the Best winner. Her novel, The Possibilities of Sainthood (FSG, 2008), received five starred reviews and many accolades, including an Indie Next Kids’ List Great Read, Society of School Librarians International Book Award Honor Book, VOYA Top Shelf Fiction for Middle School Readers, and the Texas Lone Star Reading List. Donna has also published two middle-grade companion novels with Scholastic, Gold Medal Summer (about a gymnast) and Gold Medal Winter (about an ice skater). Last year, Unplugged the first novel in her sci-fi trilogy about two competing worlds, one real, one virtual, came out from HarperTeen, with The Body Market and The Mind Virus both to be published this year. She lives in Brooklyn.