Entertainment In the NewsNovember 24, 2017 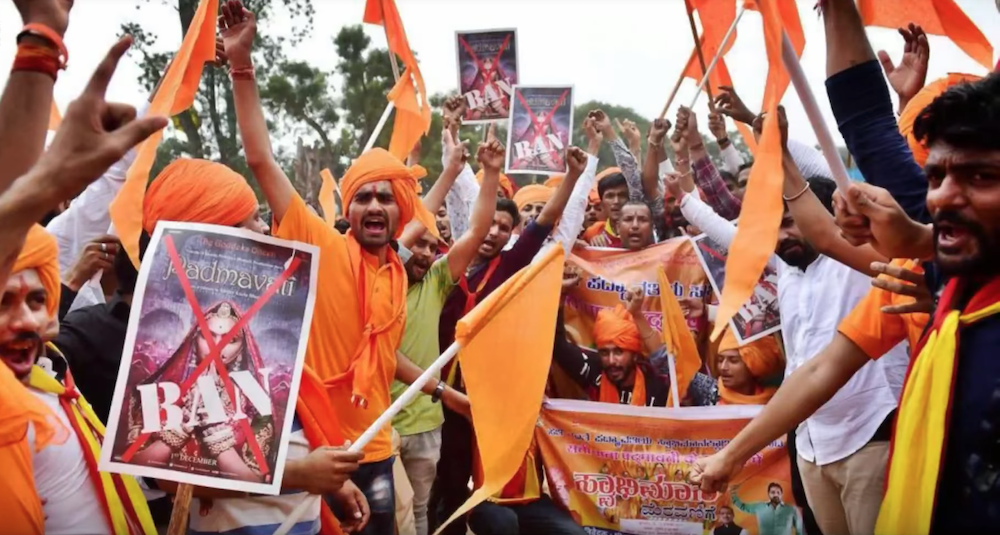 Controversy and increasing protests have delayed the release of Bollywood film “Padmavati,” a film based on a poem about the Rajput queen of the same name, and a Muslim ruler written by 16th century Sufi poet, Malik Muhammad Jayasi.

The movie has been accused of allegations including “distortion of facts” and “misrepresentations,” including intimate romantic scenes between the two characters, a claim the producers of the film have denied. Director Sanjay Leela Bhansali and actress Deepika Padukone (who plays Padmavati) have received several threats, one of the latest from a senior Haryana BJP leader, who has offered a 10-million Rupee bounty for their heads.

Suraj Pal Amu, the party’s media coordinator in Haryana, told The Indian Express he has “announced to double the prize money of Rs 5 crore announced by Meerut youth Som.” The party, however, has distanced itself from the leader’s remarks.

Instead of resorting to dialogue and debate the Karni Sena party is demanding violence and creating an environment of fear to address their views on the film.

The producer of “Padmavati,” Viacom18 Motion Pictures, “voluntarily” delayed the release of its film on Sunday in light of increasing protests by Hindu right-wing and caste groups. The film, directed by Bhansali and starring Padukone, Shahid Kapoor, and Ranveer Singh, was originally said to be released early December.

The firm first experienced threats in January, when Bhansali was assaulted by members of the Karni Sena. Later, protests increased in Rajasthan, Maharashtra, Uttar Pradesh, West Bengal, Karnataka and Haryana with the accusation that the film offended the Rajput community.

In Rajasthan, members of the Rajput community blocked entrances to the Kumbhalgarh and Chittorgarh Forts and burned effigies of Bhansali, demanding a complete ban of the film. Chief Minister Vasundhara Raje appealed to Union Minister of Information and Broadcasting, Smriti Irani, to ensure the film is not released until “necessary changes are made so that sentiments of any community are not hurt.”

Alongside this, Uttar Pradesh deputy chief minister Keshav Prasad Maurya said he would not allow the film to be released until controversial parts were omitted.

Members of the Bharat Kshatriya Samaj, led by its President Rajesh Singh, has held various protests in Kolkata.

“[‘Padmavati’] has deeply hurt the Indian culture and the values of the Hindu population in the country. The scenes, which are objectionable and harmful to Indian culture, need to be deleted before release,” Singh said.

The groups have vandalized cinemas and threatened to chop off Padukone’s nose, referring to a story in the epic Ramayana where a character has her nose chopped off as punishment. Just recently the body of a man was found hanging in Jaipur with a sign next to him that read, “Protest against ‘Padmavati.’ We don’t just burn effigies, we kill.”

Karni Sena leaders have also urged members of the Rajput community in the United Kingdom to protest, as well — the London-based Hindu charity, Rajput Samaj, has called for the British Board of Film Classification (or the BBFC) to rescind the film’s classification and added that they would peacefully protest the film.

Many have also spoken about issues that are taking a backseat due to the “Padmavati” controversy. These issues include pollution, Aadhaar related deaths due to starvation, allegations of corruption, unpaid NREGA wages and the list goes on.

Historians and scholars have thrown their lot behind Bollywood’s filmmakers and actors, who have come together to protest against the threats and call for the ban, saying it is absurd that a fiction movie has evoked such violent reactions.

Padmavati is not a “historical but an imaginary character,” Historian Irfan Habib of Aligarh Muslim University told the media.

I’m appalled at the drama that’s unfolding.. it’s ludicrous and I’m so ashamed of some of these Indians.. https://t.co/LMNnewDOKT

Among depictions, people have also complained the trailer shows Muslims in a bad light including the Muslim emperor Khilji, who is shown as a deranged meat eating marauder.

“This movie embroiled into so many controversies because of some rumor. Rumor is this, in the movie a dream scene has been filmed between Rani Padmavati and Alauddin Khilji. I have already rejected this claim and also given a written proof of this. Today again, I am reiterating through this video that in our movie there is no such scene between Rani Padmavati and Alauddin Khilji, which would hurt the sentiments of anyone,” Bhansali said.

Deepika Padukone also weighed in, as well, in an interview with The Indian Express:

“We are extremely proud and confident of the film we have made. When the heart is in the right place, no one can stop a film,” she said. “For how long would the entertainment industry be made a scapegoat for everything that happens in this country? Why attack cinema which is full of love and which brings people together? Why curb people’s freedom of expression? How long can we allow some people to get away with what they have been doing?”

Threats to the director, actors and those involved in the film continue to rise.