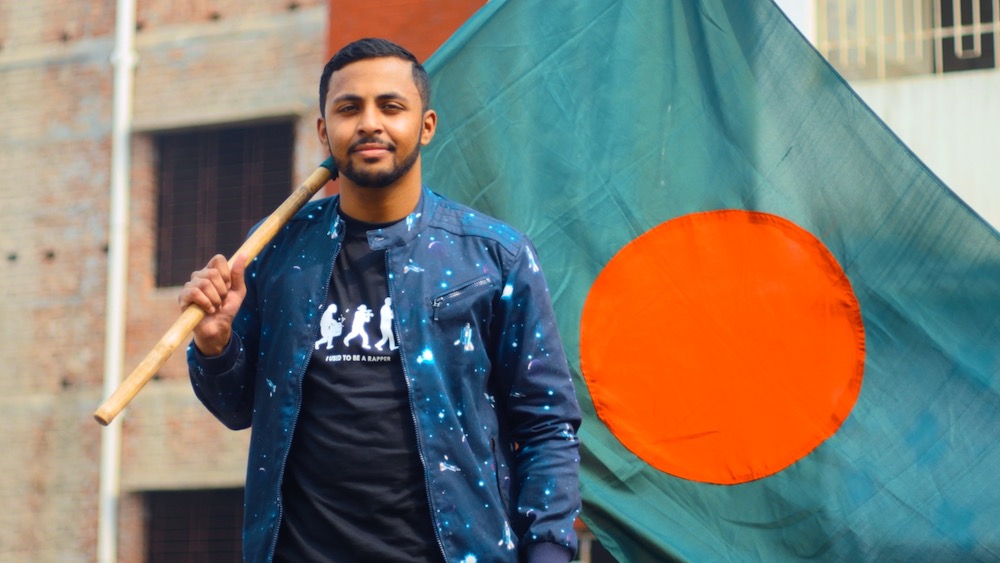 New Jersey resident Shafayeth Syed, better known as Sha Vlimpse, went from being a broke, local substitute teacher to signing a record deal—all while his Bengali culture was on full display.

Vlimpse originally joined social media to create goofy videos, vlog and express his creativity. He began rapping about the life he knew: his Bengali background, the pain from losing his mom, and career setbacks. The video track, “I Used to Be a Rapper,” helped Vlimpse make the shift from working as a substitute teacher to someone actively on the path to his dreams. Then, when a video he shot at his graduation from Rowan University went viral last year, he realized he really had something special.

We sat down with Vlimpse on the heels of his Bangladesh radio tour to learn more about what drives him, what he’s got in the works, and how he’s planning on changing the rap scene for good.

How did you get your start in rap, and what brought you to this point?

“I was just a Bengali kid in New Jersey going to sixth grade when I fell in love with hip-hop. The song that caught my eyes was “Ridin’ Dirty” by Chamillionaire. Then I started watching movies like “8 Mile” and shows like “Wild ’n Out.” My friends and I would battle-rap in the backyard. While they did it for fun, I would go home and continue to practice. However, I lived in a Muslim house, and my parents were very against it. Music is against our religion, they explained to me, but I continued doing it. Ten years of hiding this rap life. I got caught from time to time. So I lied, I cried, and I made my parents cry due to my passion for rap.

I didn’t want to continue hurting them, so I gave up rap for a while. In late 2016, my mom passed away, and I was at the worst point in my life… and then [the video] goes viral. Due to the positive feedback from this song, my dad saw that I didn’t use any bad words or use any profane language. He finally saw the potential that I had after 10 years, and I finally got the approval that I fought a long time for. I broke the biggest wall in my way, and now it’s time to break the wall between Desi culture and hip-hop in America.”

How does your culture play a role in your music?

“I feel like I have a big responsibly on my shoulders. I’m Bengali, [but] even in the Desi community, we’re minorities. I want to represent my culture and my country in America’s hip-hop game. I know it’s hard. Fellow Bengali musician Anik Khan said, for our minorities, we’ve got to make sure our songs are five times as fire just to be considered below equal.

“As long as we have platforms like Brown Girl Magazine, it provides a place for our community to come together and share their story, and that’s what we need—some kind of unity between us in America. I have two audiences, the Americans and the Bengali people back in the Motherland. So, when I make music I have to be mindful what audience the song is for.”

Yesterday I spent 13 hours in the studio giving it my all as I record my album And there’s a lot of lines I make reference to my mom She had a huge impact me and her passing Left a hole in my heart Rapping is how fill this void Everyday I miss her Happy Mother’s Day P.S my mom is on the album

[READ RELATED: Lisa Mishra: A Name You Should Get Used to Hearing in the Music Industry]

What inspires you, and what is your creative process like?

“I was inspired by Chamillionaire at first, then Lil’ Wayne, then Eminem. I feel like I go through phases when I’m into one rapper and then hop to another, and I think that allows me to pull inspiration from multiple styles. For example, the wordplay of Lil’ Wayne combined with the multiple syllable flow of Eminem with a mix of who I result in something much different from these three components alone.

As far as the creative process goes: I subscribe to a bunch of producers and listen to a lot of beats while driving. Once I find a beat I like, I replay it 1,000 times and just rap. Over time, ideas start to form, and when I have enough ideas, I sit down and polish things up.”

This is how I plan on slowly hacking culture. I will tell you right now the biggest youtubers in BD knows who I am. Align yourself with successful people and that’s my plan. If I got a pulse on BD and America I will exploit every plug. In this video I teamed up with @khalidisasavage he taught me how to speak Bangla. It’s a comical segment we did for his channel and I wanted to show my viewers the cameo I had on his vlog. Hope you enjoy. #youtubestar #youtubevlogger #youtubeguru #youtubecouple #youtuberedits #youtubetutorial #youtubecreator #youtubesubscribers #youtubelive #vloggerlifestyle #desipride #desiblogger #desibloggers #desiyoutuber #bengaligirl #bangladesh?? #banglasahib #bangla #collaborative #collaborators #collabs

From your experience, what’s one piece of advice you’d give someone that’s trying to come up like you are?

“My advice would be to build relationships. Understand that there are levels of this game, but once people see potential, use that to your advantage. For example, I am starting this thing called Me + You Movement, where you take what I do and you take what you do, and it produces something. Me + Brown Girl Magazine = This article.”

“You see, if we come together in one way or another, it will help all of us grow. Sometimes the tradeoff isn’t equal, but it might just be enough. So, my plan is to connect with as many people as I can, so we can all grow together. The key point is that collaboration is the number one way to grow. Fact.”

Any big projects in the work?

“My future, inshallah, looks bright! On August 29, I’ll be dropping my first album titled, ‘I Used To Be A Rapper.’ This album is going to be a project that I see push our culture forward. That’s why I am trying to unite and get in contact with as many people as I can because I see great things coming from this album. I can’t say too much, but I worked for three years on this vision and now it’s finally happening. I hope in a few months, Brown Girl Magazine and I will look back and discuss how I was able to pull off a cultural revolution with this album.” 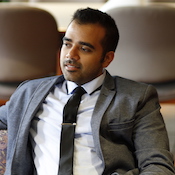 Chirag Pandya is a first-generation Indian American who has a passion for marketing, storytelling and content creation. His interests include poetry, cold beer, music, movies and having heated discussions on why Jordan is better than Lebron. You can find him on the dance floor or on social media @Wordzfordasoul.