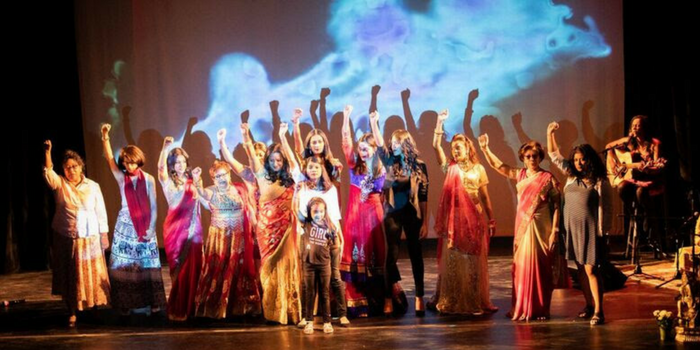 I didn’t know he would be in the house when I entered. In fact, I didn’t see him until I was looking for his children, my cousins. I walked out into the backyard and jumped when I saw him on the phone, swinging on the hammock.

I quickly hurried back into the house where all the other adults were seated, observing my cousins playing. I grew anxious because I did not want to be in his presence and I knew the right thing to do would be to leave, but my feelings were not enough to convince my family to leave now that we had just arrived.

He walked into the living room with great grandeur, like he was proud — like he too had owned the house in which he was only a visitor.

“You tell my wife to leave me in jail,” he said. Everyone paused their conversations mid-sentence and stared at the two of us, preparing for a face-off.

“Yes, I did,” I said, bravely. He proceeded to yell and scream at me as everyone watched in astonishment and shock. I was helpless as my aunt’s abuser yelled and cursed me endlessly for suggesting that my aunt not drop the charges against him for beating her. No one, not one family member that was present defended me. They remained silent as I urgently left the house.

His words and his anger did not leave a stain in my heart, as much as the silence of my family and the compliance of his emotional and physical abuse towards my aunt. This is the moment that came to mind when I saw Taij Motelall’s production, Jahajees Rising, at Flushing Town Hall.

I knew the production would be one that opened wounds for many in the audience, including myself.

As soon as the first scene presented itself, Sevita, based on Stacy Singh and played by Miranda Deebrah, was lying in a hospital bed with her daughter, Shanti, by her side, I began to cry. In fact, I heard a symphony of sniffles from all corners of the room, including my mother, friend, the woman behind me.

Jahajees Rising challenged the notions of shame through intergenerational storytelling, music, and poetry. Audience members were taken through the past, present, and future of Sevita’s life. Trauma and domestic violence haunted her through her great-grandmother, grandmother and mother. When I saw the light of Sevita’s ancestor, Sundari, being taken from her by her abusive husband, I couldn’t help but think how many lights have been put out because of the patriarchy in our culture. Sundari’s husband chops her hand off and steals her joy of dancing.

Because Sevita realizes that she has “never seen peace in her life” because she too has become subjected to the same trauma and pain as her ancestors, she decides to join Jahajees Sister Circle to find support and comfort from other women in the community. Sevita delivers a poem about her new found empowerment she found by channeling the women of her past and present.

(we) are a rising Jahajee tide,

a new moon is eclipsing violence”

We are then flashed forward as we see Sevita’s daughter, Shanti, grow up and become a strong, independent young woman married to a man who respects and values her well-being. This was only possible because Sevita was able to leave her abusive husband and this new man showed Shanti the possibilities of what life could be like outside of abuse. The image of Shanti and her husband reminded me of the value of recognizing the difference between an unhealthy and healthy relationship. We need to teach our children the qualities of the latter.

The production took audience members through 100 years of possibility. This type of envisioning should be seen over and over again until it becomes the new reality of the Indo-Caribbean woman’s experience.

Jahajees Rising opened the door of vulnerability and revealed how the power of shame and gender-based violence has traumatized Indo-Caribbeans. To me, shame is feeling unworthy of belonging. And what has happened is that shame has rooted itself in the systems in which we have raised our sons and daughters.

“Gyal, ya nah ga feel shame?” is a question I’ve heard often when present in a room filled with Indo-Caribbean women and it is what I saw in the history of characters presented in Motelall’s production. This history and power of shame in the Indo-Caribbean culture has allowed us to dehumanize our women and it has allowed us to become silent in moments when we must call out using the power of our voices.

It is the shame of daughters being unmarried that pushes families to marry the daughters to those who are unworthy. It is shame that allows our daughters, sisters, aunts and friends to be abused, that has caused us to turn a blind eye to their pain and heads held low to their deaths.

Shivana Jorawar opened up the evening by bravely declaring that she is a survivor of gender-based violence. “If we’re really going to change, we have to push ourselves and each other,” Jorawar said. The Jahajee Sisterhood was born through death but will thrive by breaking the silence on gender-based violence. What I learned from the production was that supporting and uplifting one woman can truly lead to supporting and uplifting all women. This, for me, was what was enlightening because I wanted my aunt and many other women in my family, who have faced abuse, to be uplifted out of the systematic oppression of patriarchy.

How can we undo a 100 years of trauma and pain? How can we go from surviving to thriving? The possibilities of how our community can move forward was demonstrated on the next day of the Jahajee Sisters Summit. Attendees had the opportunity to attend various workshops facilitated by Indo-Caribbeans and local organizations like Carribean Equality Project, DRUM, and Indo-Caribbean Alliance.

My biggest takeaway from the second day was that I was in a room full of people who truly defied the stereotypes of what it means to be an Indo-Caribbean woman and man. No one asked me if I was going to get married or when. No one commented on my looks or whether or not I gained weight. For so long, I was self-consciously placed in spaces where I was judged for being unmarried, short, and fat to this new space where men wanted to talk about toxic masculinity and how they can support women. This blew my mind.

I was taken on a journey during the Summit that when one woman is given the resources and support to rise out of violence, we all rise with her.