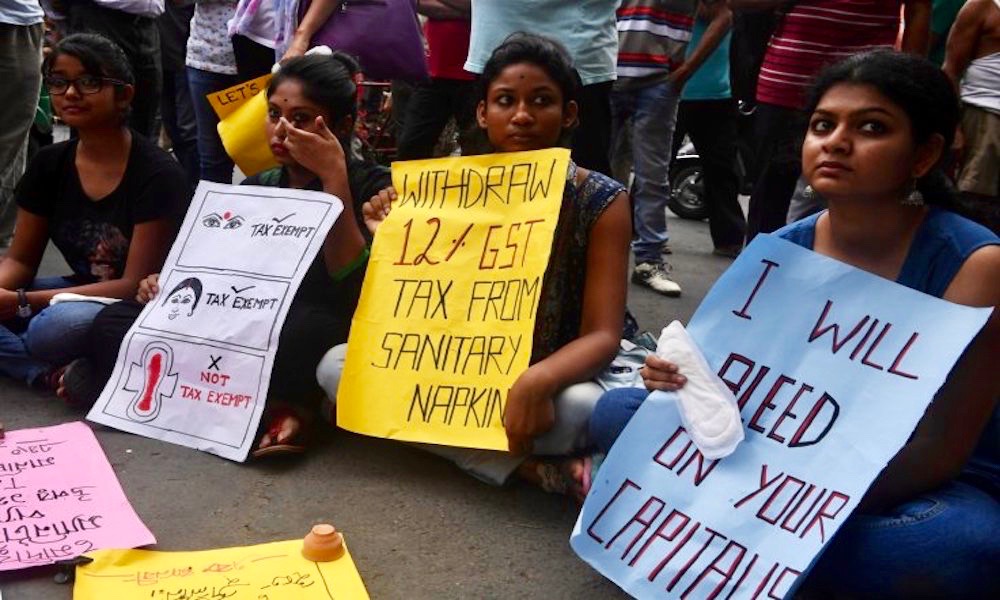 After more than a year of campaigning and protests by advocates, the government of India has finally decided to scrap a controversial 12 percent tax on feminine hygiene products.

“[The country’s] sisters and mothers will be happy to hear that sanitary pads have been given a 100% exemption and brought down to a tax rate of zero. Now there will be no [tax] on sanitary pads,” said the country’s acting finance minister Piyush Goyal.

In a campaign entitled #LahuKaLagaan (“blood tax”) by the organization SheSays, protesters argued that if products like contraceptives are tax-exempt under India’s new goods and services tax (GST) program, then sanitary supplies should be, too. Indian lawmaker and Parliament member Sushmita Dev received more than 400,000 signatures on her petition in favor of the tax repeal and tweeted:

I hear that sanitary napkins have been exempted from GST. I want to thank all the people who signed my petition #taxfreewings
Clearly the government had put forth frivolous arguments for one year & delayed it.

Many other celebrities and advocates, including Akshay Kumar, the lead actor in this year’s highly acclaimed Hindi movie on the issue, “Pad Man,” took to Twitter to laud India’s long-overdue decision.

One of those days when a news brings tears of joy as a cause close to ur heart gets fulfilled.Thank you, #GSTCouncil,for understanding the need for menstrual hygiene & exempting sanitary pads from tax. I'm sure crores of women in our country are silently sending gratitude ur way

After a year-long fight #GSTCouncil has abolished tax on sanitary pads! Feminine Hygiene is now tax free! Lives will be saved! Thank you to the FM, the Government of India and the GST council. Also, take a bow @TrishaBShetty and @SheSaysIndia pic.twitter.com/BGwd2xdGCl

Feminine hygiene products nonetheless remain unaffordable for the vast majority of India’s women, as millions in impoverished rural areas use rags, or even sawdust, during their monthly cycles. According to India’s National Family Health Survey, more than 40 percent of Indian women aged 15 to 24 do not have access to sanitary products during their periods. The lack of proper menstrual hygiene and sanitation have been linked to girls dropping out of school and lower productivity in the workplace.

On the bright side, India now joins Ireland, Kenya, and Canada as the few countries in the world with tax-free sanitary products. Most recently, the Australian Senate passed a bill to get rid of the so-called “pink tax” on feminine hygiene products. However, in the United States, the “tampon tax” has only been outlawed in Minnesota, Illinois, Pennsylvania, New York, Massachusetts, Maryland, New Jersey, Connecticut and Florida. So, when is the rest of the country going to join the bandwagon!?