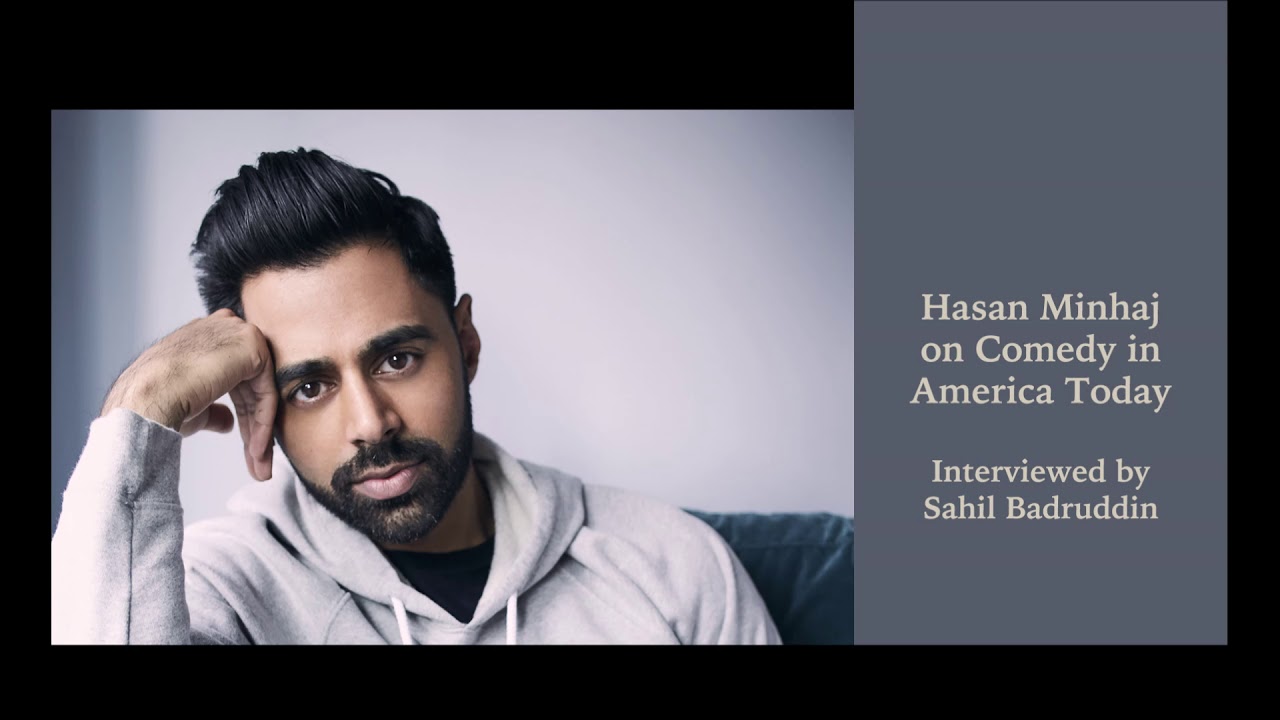 Brown Boy Sahil Badruddin interviews Hasan Minhaj – American comedian and actor and host of the upcoming Netflix series, “Patriot Act.” Hasan Minhaj had been a senior correspondent on The Daily Show, which he joined in 2014. He was also the featured speaker at the 2017 White House Correspondents’ Dinner.

Hasan Minhaj spoke about his journey so far as a comedian, his personal advice to all artists, current challenges in America, and the future of entertainment and comedy.

Below are just a few of our highlights from the interview. Take a listen to the full interview in the YouTube link above!

Besides skill, what do you feel are some of the biggest challenges new and upcoming comedians or artists face currently in America?

Hasan Minhaj: I think it’s two things. I would say that the number one pressure is, especially for artists that grow up in communities like ours, there’s this huge pressure of how do you define success in a career where there are really no guarantees?

Look, everything in life especially in the workforce is subjective, but especially art. Art is one of the most subjective things. Finding a career in show business is also incredibly subjective. How do you define success by that? Sometimes people don’t know how to define it for themselves. Sometimes they’re defining it the way other people define it. I think that’s a lot of pressure and something I struggled with when I was a younger artist; what is making it mean.

The second thing is, while you’re dealing with the struggle, grind and climb, how do you stay true to your own voice? How do you find your voice and cultivate that? There’s a little bit of like you have to immerse yourself in a community but you also have to really get things to really be quiet and really think about, “What do I want to sing? What do I want to share with the world?”

Especially when you’re coming up you really want to be like your role models. You really try to emulate them. As you continue to evolve and grow, you start to realize, “Look, there’s only one me. I really have to refine and hone and find my own unique voice.”

I’m going to ask something a little more personal. As you hustled your way through this, there were times, I know you spoke about publicly, where you said your parents and your peers didn’t always support you until you made it, right?

What advice would you give for a guy who’s hustling, who’s struggling? But you know there are certain hurdles in certain cultures, for example, there’s less appreciation for arts or music or comedy as careers. As you said, there’s no tangible metric, right? Even advice on how to have that conversation with parents and peers.

My parents, their concern was just like, “It’s not that we don’t think that—

They care about you.

I think I came to a really important conclusion for myself; I can only do things that I’m all in for. I just really loved comedy that much. Honestly, I had no problem sleeping on an air mattress and just having my yellow notepad and having my show that night.

As long as you did what you loved?

Hasan Minhaj: Yeah. For me, I really realized making it was just… There was a moment where look, there was gas in my car, I was able to go to Chipotle and get a burrito with avocado. I could afford the extra $1.45 to have guac. I had health care and I was doing what I loved. I’m like, “This is it. This is making it. This moment where I’m at, if it increases any more, that’s great, but this is making it.” I’m paying rent and doing what I love.

You’ve mentioned that in the next 15 years of entertainment we’ll include more female voices, especially—

Brown and even Muslim female—

Hasan Minhaj: And I cannot wait to see. That’s going to be really cool.

How do we help create that better environment to see that? Is it already happening or—?

Hasan Minhaj: Yes. I think the biggest thing that new voices, and especially voices from diverse, different communities that we haven’t heard from, whether it’s women of color or people from the LGBTQ community. I think the biggest thing that they need, we all need, is just space. They need to be included in the bills on comedy shows or in the writer’s room and having inclusion that way gives them an opportunity to shine.

My biggest thing as a dude is to just get out of the way and let them share their stories and be great. That’s one of the biggest lessons that I’ve learned and to do everything that I can to make space, listen, and contribute.

Going back, there’s a tendency, especially when performing comedy, to use self-deprecating humor. For example, for South Asians, people use Indian accents, the “Apu Syndrome”, right?

How do we go beyond that?

Hasan Minhaj: Or you feel like you’re walking into a door, and it’s not a door, and it’s just a window, and your face-plant. Why are those things funny? I think it’s because people find it funny that, “Hey, like you were embarrassed” because I think we’ve all felt that way before. My thing is that I want to tap into the human condition, and I’m totally okay with self-deprecating humor as long as it’s tapped into that and it’s not linked to just something where you’re going to just laugh at a stereotype.

Hasan Minhaj: Do you think it’s getting worse?

No, I think it’s been the same.

Hasan Minhaj: Oh, really? Like it’s stayed the same since even the ’90s? They’re still–

I think it may be getting a little bit better because people are recognizing it more. I mean, the “Apu Syndrome,” there was a whole—I think I’m sure you saw—

Yes. I think there’s been more recognition of it, but you’re saying… Are you using it in the positive sense versus the…?

Hasan Minhaj: Yeah, like how do I just happen to the everyday human condition that everyone knows and feels. Those common emotions of pain, love, loss, anxiety, fear, embarrassment, those are the things we all feel.

Hasan Minhaj: I definitely feel super-humbled that people would consider me to be somebody that they would look up to and admire and all that stuff. It’s definitely a lot of pressure, and there’s definitely feelings of “Hey, you can’t mess up because people are watching, people are looking at you, and people maybe turn to you.”

Do you have any idea how much paperwork this took? @patriotact premieres October 28th on @netflix!

Finally, you’ve been doing this North American tour, and you have your Netflix series coming up, “Patriot Act.” Five years ago or six years ago, did you imagine you’d be doing this?

Hasan Minhaj: Wow. No, I didn’t imagine that I would be here, but I remember about five or six years ago, I just became – that’s what, 2013? I was doing videos called The Truth with Hasan Minhaj, and I was part of the sketch group called Goatface, and I was doing stand-up and starting to get involved in the storytelling community through the Moth storytelling hour. I was just looking at the next monkey bar ahead of me. That’s all I was doing, was making the best possible stuff that I could.

Is it different now?

Hasan Minhaj: Yeah. You got to see the monkey bar tonight, and it’s refining that and finessing that, and it’s getting ready for our final show of the tour, which is October 18th at Carnegie Hall, and then October 28th the series drops.

Sahil Badruddin is a graduate of The University of Texas at Austin and majored in Chemical Engineering, Religious Studies, and History. He conducts interviews with scholars, leaders, and educators for various platforms to discuss their insights on contemporary issues. Some of his recent interview guests, among others, include Karen Armstrong, Reza Aslan, and Eboo Patel.