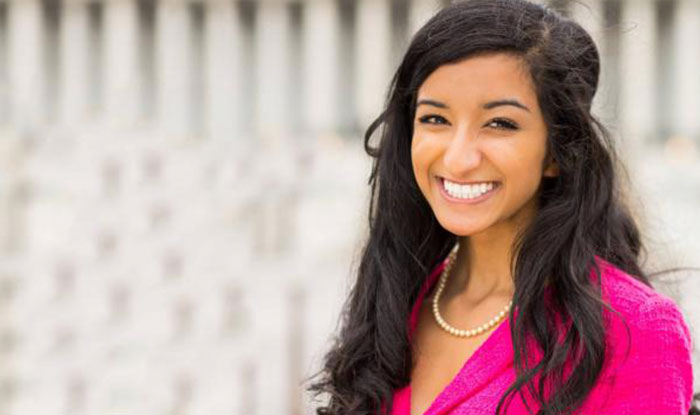 Serene Singh just became the first woman to receive the prestigious Rhodes Scholarship from the University of Colorado Boulder; she is one of 32 recipients from the United States, and wears her history-making title with pride.

This young woman has several accolades to her name including the Truman Scholarship and Boettcher Scholar to name a couple. Singh is also the creator of the #faceofdogs campaign, and while it may sound trivial in comparison to her unbelievable feats, it is indeed noteworthy; the campaign is truly a representation of her personality. Through the #faceofdogs initiative, Singh requests you to pet and take a picture of every single dog you meet, if you can, regardless if you are running to a meeting or have to make it to a study date. She notably says,

It allows you to see the bigger picture, that the world is bigger than your stress or problems. Dogs show you the purpose of being human.

Thus, Singh not only fits the criteria of beauty with brains, as a titleholder of America’s Junior Miss and Miss Colorado Teen but also has a heart of gold, determined to make lasting changes in her community.

As a Sikh-American, Colorado native and a senior at CU Boulder, Singh is majoring in political science and journalism and aspires to become a Supreme Court Justice in the future. While in conversation with Brown Girl Magazine, she discussed how her accomplishments led her to pack her bags to study at the University of Oxford in Oxford through the Rhodes Scholarship. All it took, as she mentioned, was determination and putting her best foot forward. Not to mention, the sleepless nights making this application her biggest priority while recovering from a concussion.

Now, let’s look at how Singh made her extracurriculars her strength and then further utilized that strength to benefit her surroundings.

Singh witnessed racial, gender, and religious discrimination as a Sikh who identifies as a confident American. A chief justice for the CU Student Government, she was viewed as the “angry brown girl” when not invited to the student government leadership forums. Raising a fit was the perfect step because she fought for women of color and led to more female recognition in the judicial branch.

Additionally, she did not back down from doing Sikh advocacy work. Realizing that the discrimination is a result of a lack of information, not necessarily intelligence, Singh advocated for the Sikh culture through love. In order to introduce Sikhs as joyful and fun individuals, she started the Colorado Bhangra Team during her sophomore year in high school. In addition, the team conducts a three-day camp as a non-profit for all ages, ethnicities, and gender to help alleviate stereotypes.

Speaking of stereotypes, Singh did not shy away from admitting that at first, she thought that pageants were something a girl like her could never do. At the age of 15, she was a tomboy, hated wearing makeup, and could not for the life of her walk in high heels. But then, her thought process changed.

Am I stereotyping pageants? I could just confirm by participating and learn to be more accepting, as I would want others to do the same for me.

In an attempt to prove herself wrong and be more accepting, she tried it out.

A few hours after putting the pageant pamphlet down on the table and walking away, I realized that I was being biased. It did not feel right to judge someone, while you as a young Sikh woman, are being stereotyped way too often.

To her relief, she was in awe of the power these pageants have on the lives of girls.

Here she was, a woman of color, no makeup on, sporting a thrift store dress, and of course, not wearing high heels. Yet, she made it to the Top 10. From that day, until now, she has participated in multiple pageants because she learned that it was not about beauty after all. It was purely about displaying confidence and passion for your interests. Her self-esteem evolved and she has a greater understanding of who she is.

By understanding who she is and what she is capable of doing, Singh feels that she is able to speak for other women just like her. Even when she is spending time painting, she proves to be powerful. She has a series of paintings dedicated to women empowerment. At the CU Boulder Memorial Center, there is a painting of a confident woman in a Sikh turban, not subscribing to beauty norms.

Singh’s efforts for women empowerment do not just end there. A pioneer, to say the least, she has founded The Serenity Project, which empowers young women who experience trauma and/or domestic violence through her pageantry skills. Adding to her list of impactful activities is her work with former First Lady, Michelle Obama, and the Global Girls Alliance, promoting education for young girls. It’s needless to say that Singh is the ideal role model for everyone—brown girls and everyone else! As cliche as it might sound, she urges women worldwide to believe in yourself and your dreams. Turn the negativities in your life into strengths, go out of your comfort zone if you have to, make an impact, motivate others, and most importantly, realize your potential.