Breaking Taboos In the News PoliticsJanuary 4, 2019 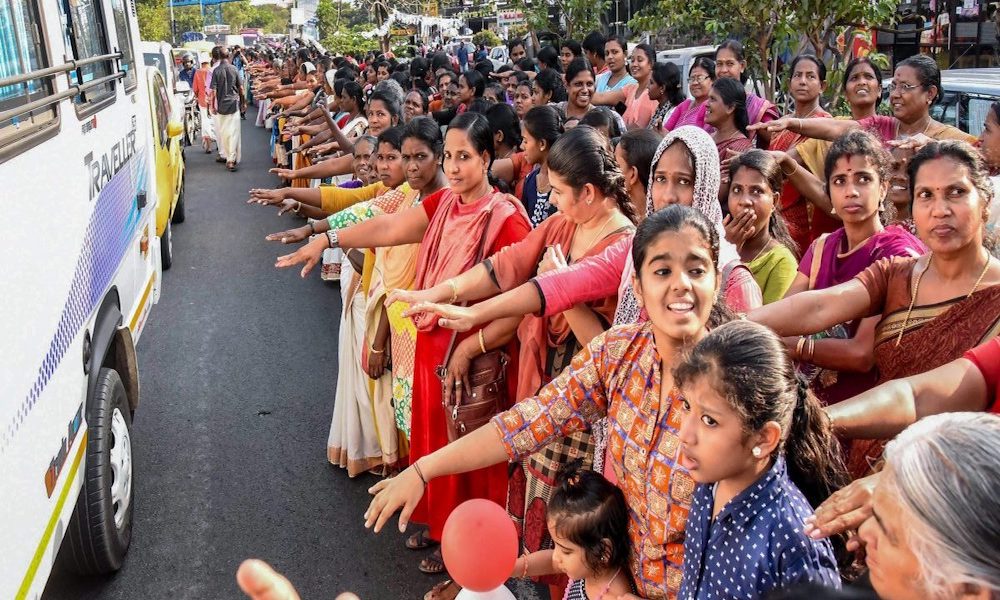 Please note the post below neither support nor goes against any political affiliation, it is merely a collection of reports highlighting the issue at hand. If you have an opinion and want to submit a guest piece, please email at staff@0mq.349.myftpupload.com.

On January 2, two Indian women under the age of 50 entered the Sabarimala temple in Kerala and offered their prayers to the Lord Ayyappa. Two women praying? Sounds normal, right? Wrong.

These two women were the first to enter the temple since the Supreme Court ended the decades-old ban on women of menstrual age embarking on the pilgrimage to Sabarimala. Upon realizing that the women had entered the temple, Sabarimala experienced a brief shutdown while priests “purified” the premises. On January 3, the Hindu nationalist Bharatiya Janata Party (BJP) and other groups called for a state-wide shutdown. Protests and violence are increasing in the area.

Tens of thousands of women in the Indian state of Kerala have formed a series of human chains extending an estimated 620 kilometers (385 miles), in protest at a refusal to admit women to the Sabarimala Temple, one of Hinduism’s holiest sites https://t.co/0dwnrIM5Uk pic.twitter.com/8cQayifvnY

Many people are citing the Supreme Court overturning of “triple talaq” (which gave Muslim men the power to instantly divorce their wives by saying “talaq” three times) as a precedent for the Sabarimala decision. Prime Minister Modi sat down with Asian News International (ANI) on Friday to clarify the BJP contradiction of supporting “triple talaq” but condemning women from entering Sabarimala by saying that the former was an issue of gender equality and social justice and was not meant to be seen as an interference in religious matters. He maintains that the tradition of Sabarimala should be upheld.

The Sabarimala temple (located on a hilltop) is dedicated to the Hindu god Lord Ayyappa. Every year, millions of pilgrims across all religions, casts, and creeds undertake the 41-day fast and barefoot pilgrimage to the temple. However, for centuries, women between the ages of 10-50 were not allowed into the temple.

So, what’s the issue?

It’s the 21st century. Hinduism is comprised of—only God knows (no pun intended)—how many female deities. So why aren’t women allowed inside this temple?

As a writer of history, I have been wondering whether it is possible at all to make an objective, non-partisan assessment of what has (and is) taking place at #Sabarimala, one of Hinduism’s most sacred shrines? Let us try. To begin with, let us accept that in a world where, after

In 1991, the Kerala High Court officially banned women between the ages of 10 and 50 from entering Sabarimala. Temple officials claimed that this was to uphold the principles and wishes of the Lord Ayyappa who is known to have taken an oath of celibacy and remain a bachelor. Devotees justify the ban on women of “menstruating age” as respecting the deity’s lifestyle. The Supreme Court lifted the ban in September 2018.

In response to the two women successfully entering the shrine, the BJP called for a two-day protest. On the other hand, Kerala’s Chief Minister, Pinarayi Vijayan, has always been in support of the Supreme Court ruling, repeatedly mentioning in various interviews that allowing women into the temple was a historic moment. On January 1, women from across the state of Kerala formed a 385-mile human wall including five million women around the Sabarimala temple in protest of the prejudice with the Chief Minister’s support.

Protests and violence have broken out and escalated, with over 750 arrests thus far, in response to the initial Supreme Court decision and since the women successfully “snuck into” Sabarimala with the help of four undercover policemen. Sixty Hindu Makkal Katchi activists were arrested in Coimbatore for protesting against the entry of women, and 15 members of the BJP lawyers’ wing in Coimbatore burnt a portrait of the Kerala Chief Minister. Many media outlets have started to boycott BJP press conferences and even an Asianet (a Malayalam language TV channel) camera person attacked a BJP worker during a protest. These are only some of the violent accounts on record thus far.

The Supreme Court of India will hear a petition challenging the overturning of the initial ban on January 22.

Whose side should you be on?

Not allowing women into the temple is indisputably discriminatory and wrong. That being said, many women in the region actually support the ban. They are associated with a group called Ready to Wait. They believe that faith and tradition should always be maintained.

“The authorities misread the situation by looking at this issue through a colonial prism,” says Anjali George via BBC news, who is responsible for starting a social media campaign in favour of the temple’s ban on women.

“This has effectively contributed to a situation where people are losing faith in the ability of the system to protect their religious rights and traditions.”

So then, who do we champion?

We at Brown Girl Magazine are champions of choice. Kerala has been historically known for being a matriarchal society; women have inherited property and been treated as the “head of the household” for centuries, and to think that their right to choose is being challenged is absurd. Sabarimala is a public place of worship and is beautifully accepting of all religions, castes and creeds.

In the same vein, those who are against this choice should not be chastised but over time reasoned with and always respected; we should never encourage the disrespect of someone else’s faith no matter what we personally believe.

Women in India are taking a stand — quite literally — for #genderequality. The Sabarimala Temple in Kerala has long banned women of childbearing age. In response, more than 5 million women across southern India staged a peaceful protest in the form of a 385-mile human chain. pic.twitter.com/w8nR9bc3HI

Unfortunately, there is no end to this problem in sight. Much to the chagrin of the women of India, this issue has now strayed away from gender equality and more about the politics of Hinduism. Both Hindu nationalist groups and leftist groups are politicizing the issue for their own benefit with the upcoming elections in mind. We hope that politicians and activist groups alike also realize that this is not an issue of faith or lack thereof, but rather, an issue of choice and the right to have it.