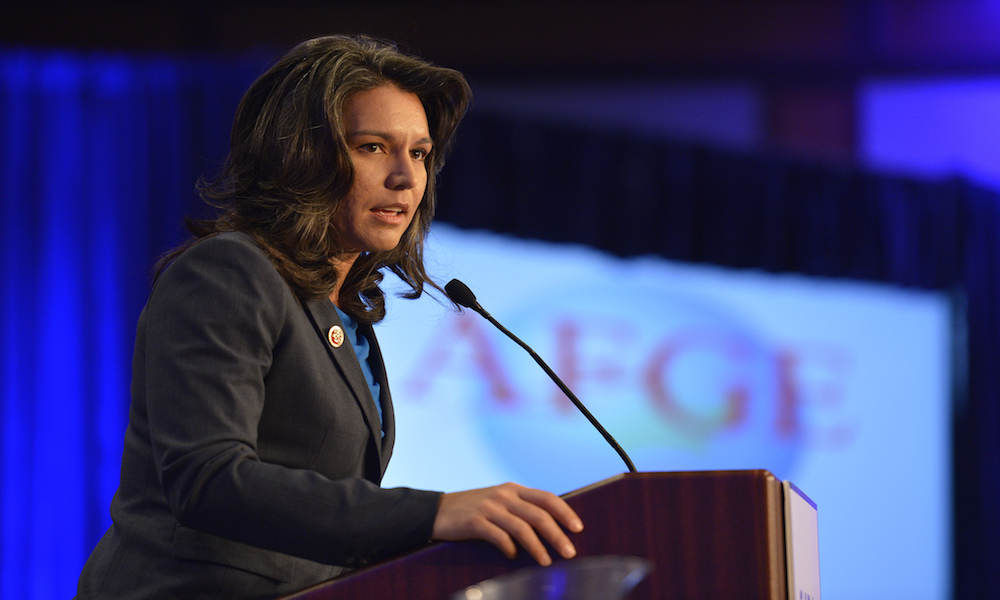 Representative Tulsi Gabbard announced last Friday that she will be making a presidential run in 2020 during an interview with CNN’s Van Jones that aired the following day.

The Democrat from Hawaii endorsed Senator Bernie Sanders during his presidential run in 2016 and is bringing on his previous deputy campaign manager Rania Batrice as her official campaign manager. Gabbard joins a long list of rumored and vocal Democratic hopefuls who will be taking on President Trump in 2020 like Elizabeth Warren, Kamala Harris, Cory Booker, and as of Tuesday, Kirsten Gillibrand.

Since her 2016 Sanders endorsement, Gabbard has enjoyed a quiet rise among progressives in the Democratic party. Her election in 2012 made her the first Hindu member of Congress, a feat highlighted by her decision to swear in on her personal copy of the Bhagavad Gita — the same copy she took with her when she was deployed in the Middle East.

Gabbard is notorious for a different approach to progressive politics. She often finds herself at odds with party leaders since she doesn’t mind crossing political lines to vocalize her opinions, she also won over many prominent personalities on the right for her criticism of former President Barack Obama’s weak foreign policy. Resigning as DNC vice chair is one of many instances where she has publicly broken with the Democratic establishment and called out members of her own party — sometimes to the delight of her right-wing peers.

Gabbard has a seemingly progressive domestic policy background—she opposed cuts to Medicare and Social Security during her first tenure in the House and has gone on record to say that the Affordable Care Act does not go far enough, effectively joining the ranks of those who support universal healthcare.

On Twitter, she has positioned herself in fierce opposition against Trump, calling him “Saudi Arabia’s bitch,” as well as opposing his white supremacist supporters (despite enjoying their support herself). She has also been vocal in her dislike of nuclear energy as well as the National Security Agency’s bulk data collection. She even personally protested the Dakota access pipeline.

Hey @realdonaldtrump: being Saudi Arabia’s bitch is not “America First.”

Tulsi Gabbard for Secretary of State! An example of the need for political realignment https://t.co/4txsxtPU3N pic.twitter.com/GAafKNjbkB

Just landed in Bismarck. It’s 10pm, 26degrees, airport is FULL of veterans coming in from all across the country #StandingRock #NoDAPL

However, her campaign has already hit a snag involving the LGBTQ democratic voting block who remain wary of her positions. Like many others, Gabbard has done a considerable 180 on her views regarding LGBTQ rights like marriage, but it is the alarmingly aggressive nature of her previous conservative stance that has left people alarmed.

When she first ran for public office in the 2000s, Gabbard had been actively working with her father Mike Gabbard against “homosexual activists,” who wanted homosexuality to be comparable to heterosexuality. She campaigned against same-sex marriage in Hawaii and opposed a civil union bill in 2004, calling it “cowardly.”

She also worked for The Alliance for Traditional Marriage, a group that led calls for conversion therapy. Gabbard apologized to the LGBTQ community in a statement in 2012 — but only because her past was called into question. Admittedly, she has devoted some of her time in the House to co-sponsor and support bills like the Equality Act, which, if passed, would amend the civil rights laws to include protections based on gender identity and sexual orientation.

Gabbard cites her deployment overseas as the reason for her sudden about-face on her aggressive opinions about homosexuality and abortion, saying she has seen “the destructive effect of having governments who act as moral arbiters for their people.” This is troubling because it does not indicate a shift in ideology or a change of heart regarding her view of LGBTQ people—rather, it is simply a shift in political practice.

This is not the first of her vaguely troublesome practices, Gabbard has met with Syrian President Bashar Assad and is outspoken in her criticism of the United States’ support for militias fighting Assad’s regime. During President Barack Obama’s presidency, she argued that U.S. aid was being funneled to Islamic extremists. When questioned about why she agreed to meet with Assad, whom the U.S. had been vocal about removing from power, she said:

Her foreign policy has drawn praise from both progressives and the far right. While she does not support interventionism and the “endless cycle of war” it brings, she is all too happy to continue the long-established policy of small tactical invasions and drone strikes, which inherently contribute to the same cyclical nature of endless war (the same was true of Obama). When asked about her record, she has clarified to the Hawaii Tribune-Herald that she is a “dove” in regards to intervention but a “hawk” when it comes to fighting terror.

Assad is not the only world leader for whom Gabbard has come under fire. She also enjoys a close relationship with Indian Prime Minister Narendra Modi of the Bharatiya Janata Party (BJP). Her relationship with Prime Minister Modi first began when she called the U.S.’ refusal to grant Modi a visa based on his actions in the 2002 Gujarat riots a “great blunder.”

It’s a powerful statement, Modi is known for his alleged complacency and covert instructions during the riots in Gujarat, which followed the train burning in Godhra and led to the deaths of hundreds of Muslims. Modi is alleged to have said “Muslims needed to be taught a lesson,” and, as an investigative journalist, Rana Ayyub uncovered in “The Gujarat Files,” he subsequently instructed certain staff to delay or dismiss calls for help, stage encounters and spread misinformation to exacerbate the situation.

Gabbard has repeatedly reiterated her belief that the prime minister did nothing of the sort and was instrumental in organizing his trip to the U.S. two years later. Since then, she has attended several U.S. NRI conferences that have been organized by Rashtriya Swayamsevak Sangh (RSS) affiliates abroad like the Vishwa Hindu Parishad (World Hindu Conference), where she was honored as a chairperson and whose organizers have been linked to inciting violence against Muslims. In fact, the CIA has classified Sangh counterparts as religious militant organizations — an association which should trouble any voter.

A Hindu president is something I could never have dreamed of, and I fully understand why Gabbard is a powerful and compelling candidate for many in the South Asian community. But just as we must confront violent, insidious elements of Hindutva where it grips tight in New Delhi, we must not allow it to take hold in the U.S. — least of all, in the White House.

Representation and success for our home countries and our diasporic communities mean everything. But at what cost? We cannot accept the BJP at its face value, nor can we give our entire political might to Tulsi Gabbard solely on the basis of her religion.

Hindutva and Islamophobia are creeping up in the mainstream political life of the United States, and the Hindu Diaspora is responsible. We have to confront our latent biases and privileges. Our complacency has allowed it to come this far—Gabbard, clad in a BJP scarf, is running for president—and we haven’t made a single sound.