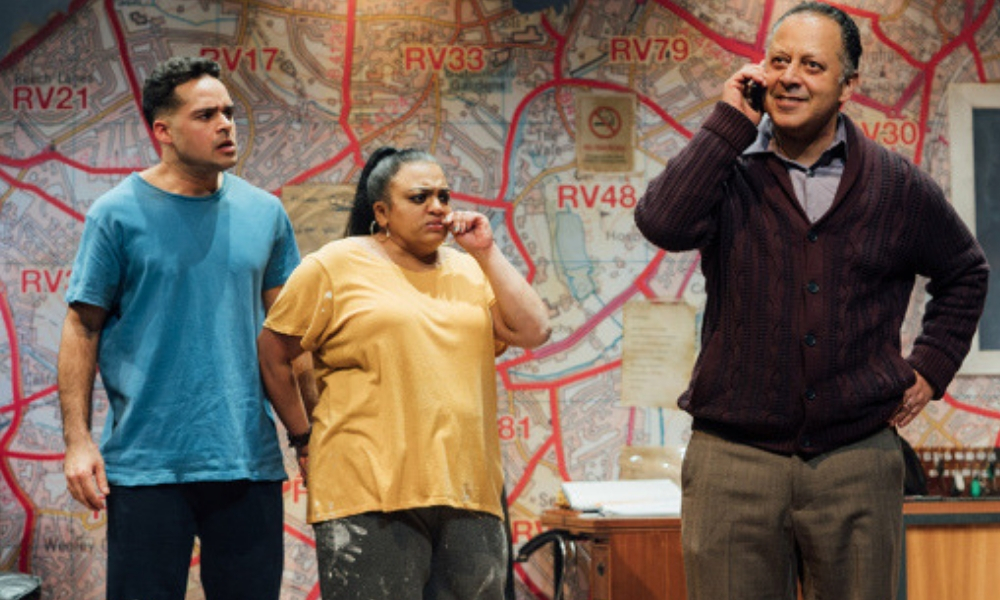 The Kiln Theatre in London (formally known as the Tricycle theatre) exhibits a sophisticated warm welcome when entering through its doors. It’s well known for the wide range of new writing productions that explore cultural adversity, voices of taboo subjects and political conflicts — the perfect place to host Ishy Din’s new play “Approaching Empty’” in conjunction with the well-known Tamasha Theatre Company and directed by Pooja Ghai.

“Approaching Empty” revolves around the long-term friendship of South Asian protagonists Raf and Mansha — two friends that run and own a taxi firm. This narrative is set in Middlesbrough, Northern England, during the post effects of Thatcherism — the term given to the catastrophes during former Prime Minister Maraget Thatcher’s reign in the U.K. between 1979 and 1990 — and examples the struggles of people affected by the shutdown of industrial mines.

Raf decides he needs to sell the business. Indications are initially towards his ill health so he tells his friend that he has potentially sold to an unfavourable buyer for a high price. Mansha is determined to find a way to raise the money to buy his friend’s share and make something of himself. But at what cost?

Brown Girl Magazine was lucky enough to review and catch up with director Ghai on what she wanted the audience to take from the play and how she landed the fantastic job in adapting the play from script to stage.

I was totally captivated from the beginning to the end. I had never heard this kind of story especially with the lack of visibility of South Asian creatives and writers. This story was about complex human beings with flaws and insights. Ishy Din, a cab driver himself, created this story about two friends at a crossroads, making choices and the consequences of choice.

The complexities of various communities rebuilding their lives and health ramifications are narrated through Raf’s journey, whose desperation to pay back his debts depicts the lengths people went through to ensure their loved ones would be ok during that period.

This story was about complex human beings with flaws and insights. The writer Ishy Din created this story about two friends at a crossroads and making conscious choices.

Initially, I questioned how this play would really work as there are no scene changes and the whole production is set in one room. How would the audience remain entertained and focused on the stage with such little effects? Ghai tells us,

I spoke to creatives such as Rosa Maggiora discussing a claustrophobic room and how to create a world that’s a naturalistic metaphor for the audience with abstract tensions.  Arun Ghosh is an amazing musician and composer who loved the play. He used to sit in the rehearsal room and was inspired with the process which would determine his approach. The collaboration of the cast and creatives served the story to get the best out of it.

Ghai is no stranger to new writing projects as her previous role was the Associate Director of Theatre Royal, Stratford East for three years, and she is grateful for working with a lot of new writing and different genres. After working on “Approaching Empty” she is whizzing to meetings for the new adaptation of “Hobsons Choice” by Tanika Gupta at Manchester’s Royal Exchange. Ghai is becoming a director in high demand — so, what made this play so different from others she has been involved with?

The writer and actors are male so as a female, south Asian director, I brought a different light and a sensitivity to the play with the writer and help from Lin Coglan – the Dramaturg. However, the female role smashes the stereotype – she is written as a Pakistan survivor, not subservient, but she’s had a tough life and currently fighting for her children. She’s a character that never asks for permission to speak therefore we made sure she wasn’t a victim.

And I couldn’t agree more with Ghai — all the male actors are strong and keep their worth throughout the play. However, the female protagonist Sameena, played by Rina Fatania, who, I have previously seen at The Soho Theatre, steals the scenes away from the main characters. She is feisty and brash yet she reels the audience to empathise with her mission to do anything for an honest life and to win back her children who are in care. She sees the chance to put her share of inheritance from her parent’s death in the taxi firm as an opportunity that can’t be missed. There is a slight disappointment of the lack of female roles, however, writer Din does well to highlight the themes that surround friendship, community, and family that echoes similarities of British Asian culture, as well as a universal voice.

In wanting to present with as much authenticity, Ghai ensures that all subject themes were originally portrayed. Raf and Mansha’s statuses are completely reversed at the end scene, whereby Raf hesitates to agree to return the money when a gun is pointed to his son’s head, representing another notion on the price of relationships, with friends and flesh and blood.

Ghai really brought the richness from all the characters and a real commandment of their importance, however small or large the role. Exampled by the characters Shazad, Raf’s son (played by Karan Gill) and ‘Tany,’ Sameena’s criminal gangster brother (played by Maanuv Thiara) who we see snippets of but have a stage presence and come alive in the second part of the play.

We all delved deep. I was lucky to be with kind, amazing people, all finding our feet in the process.

I think it’s right to point out that Din, Ghai and all the actors are people to watch out for. I’m excited to see more from all of them and hope this will be the first of many projects they’ll be involved with.

Approaching Empty is currently on a break and will start in Scotland next week. For more information visit www.tamasha.org.uk/approaching-empty/