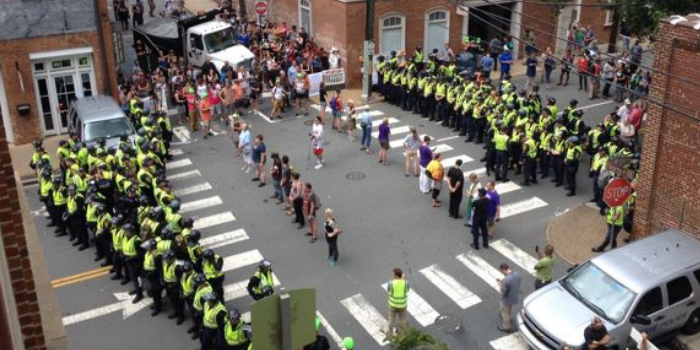 “Nice people made the best Nazis. My mom grew up next to them. They got along, refused to make waves, looked the other way when things got ugly and focused on happier things than ‘politics.’ They were lovely people who turned their heads as their neighbors were dragged away. You know who weren’t nice people? Resisters.”

These are the words of author Naomi Shulman, whose mother spent her childhood in Nazi Germany.

Nice. It’s a word I hear a lot, mostly as an instruction from white women. There are variations, of course:

At first, it was confusing. How was calling out white supremacy “not nice?” Now, I’ve come to understand it.

When I am told to be nice, it means a variation of the following:

Here are a few “nice” topics for conversation:

The meanest word on the planet? White. “White” is vile, evil, the serial killer of white people. That said, sometimes white is nice: “Where’d you get your super cute white flats?” But nice is never this: “Do you know Ellen, that white woman over on Spruce Street?”

It’s strange because right now, we are in a decidedly “not-nice” time. It’s called fascism – the same diabolical ultra-nationalism behind World War II. Our president has declared himself to be a nationalist, and along with that declaration, it appears he has also dedicated himself to fascism. We are sitting in a violent stew of border walls, caged children, tear-gassed protestors, Muslim bans, college bans on “white-privilege” seminars, and even a Democratic governor in blackface and/or a KKK robe.

Trump isn’t accomplishing all of this alone. With him every step of the way is his best friend – THE MEDIA. And no, I don’t mean just Fox News.

The mainstream media isn’t merely complicit. They actively give hate a leg up, a platform. What does this look like? Simply put, black and brown lives don’t matter. Only white lives do.

An easy example of this ideology is seen in Exhibit A – the Covington boys who donned their white robes and hoods (i.e. MAGA hats) and publicly mocked a Native American elder. In typical form, the news media demonized Nathan Phillips, the elder, before erasing him altogether. Simultaneously, journalists elevated Nick Sandmann – the grinning head honcho – to a veritable God, with  The Atlantic to the Today Show and everyone in between showering him with love.

Exhibit B occurred in October when a white nationalist stormed a synagogue and assassinated 11 innocent Jewish people. Rightfully, the news media covered this atrocity 24/7. Yet it largely ignored another horror that took place a few days earlier, in which another angry white man assassinated two black people, Maurice Stallard and Vickie Lee Jones, at a Kroger grocery store in Kentucky. Moments before the crime, the murderer had attempted to enter a black church, but the doors were locked.

When I called out the discrepancy of media coverage on Facebook, the Nice Police showed up as dependable first responders.

Within minutes, a white woman announced: “If you keep dividing Jews from POCs, you are feeding the hate and separation.” She then weaponized Audre Lorde against me, mocked black women for calling her out and reiterated the need for a blue wave. 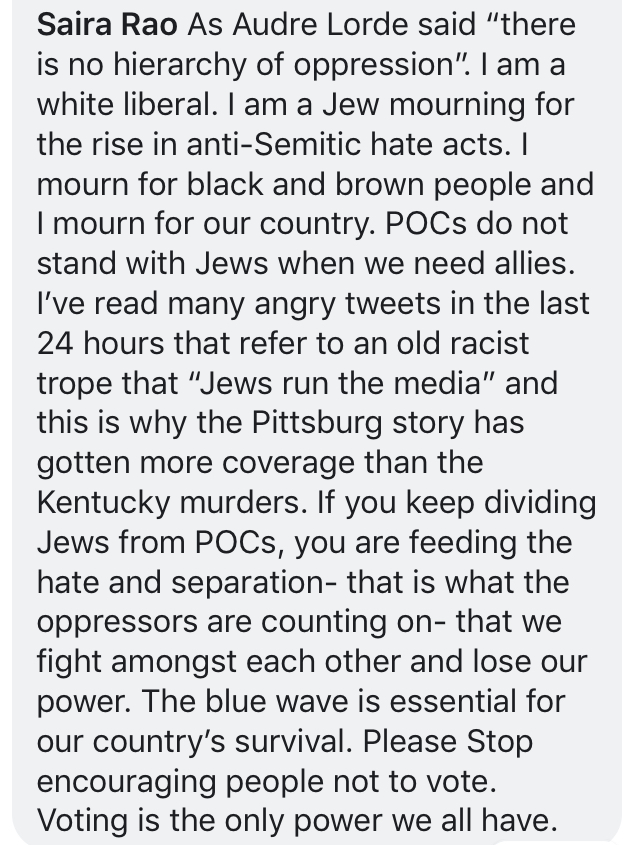 You see, it wasn’t nice of me to point out the racism of the liberal news media and the concomitant racism of liberal white America. It wasn’t nice for brown and black women to agree and speak their truth – that white America has consistently let them down.

You see, our words made this white woman and other white folks on the LONG thread feel not nice. They felt bad, maybe a tinge of guilt. If we make them feel “not nice,” then we are not nice.

These well-intentioned, “nice” white people would prefer to continue being the lovely people who turn their heads as their black and brown neighbors get shot here, there and everywhere. Lovely people who spout “blue wave” and “get out the vote” but cover their ears, eyes and mouths at the mere notion that they might be part of the problem, rather than the solution. Lovely people who are fine with the wanton killings of black people but fall off their Peloton bikes if you call them out for it.

If you think that my calling this out or if my calling YOU out makes me not nice? Guilty as charged.