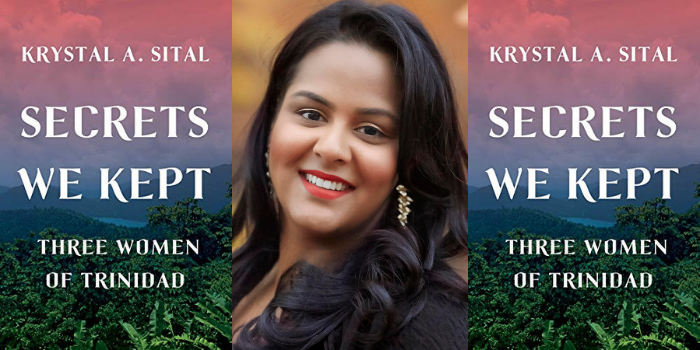 Krystal Sital uses her novel “Secrets We Kept: Three Women of Trinidad“ to shed light on her family’s personal experiences as told through three generations — herself, mother, and grandmother.

She winds a dark tale beginning with the near-death of her grandfather with a cerebral hemorrhage, a sudden-tragedy that we see two of our main characters — his daughter and wife — take in with relative ease. We soon begin to learn the twisted and dark histories of the two women, from hard days living on a farm in Trinidad to the physical abuse they endured at the hands of their husbands. As the main plot unveils itself the reader is side-struck with detailed images of cultural clashes, poverty and the values of class.

The story’s setting transfer between Trinidad and Togabo and the U.S. The former nestled off the coast of South America, resting at the end of the Caribbean islands is home to roughly 1.4 million people, and while, yes, this may be large for such a small island, it holds a rich culture, filled with shared experiences and a unique sense of community that pulses endlessly through generations there, and that vibration reverberates through Sital’s book and echoes into my own experiences as an Indo-Trinidadian-American woman.

The more I wrote the more I understood the history of these islands that I carry with me in my very being, this place I often long for, Sital said. As I searched for more books like the one I was writing [I] came up empty-handed, and truthfully, I despaired because I was scared to take on such a massive project that needed to do these women justice, the writing of this book became the urgent need and desire to record oral stories that are often lost from one generation to the next.

The visibility this book brings to Indo-Caribbean women is something I had yet to experience in my life. As I sunk into every word I was overwhelmed with emotion, it stimulated conversation with my parents and my family about their journeys and made me realize what authentic representation does for a community.

Because women’s voices have been historically silenced worldwide, I knew that while I straddled other important topics like colonialism, racism, language, identities and history, the act of recording women’s stories in the Caribbean became the heartbeat of why I was writing this book, she said. Too long had I felt and seen women treated as though their voices and stories did not matter.

Sital’s brave approach to use personal family experiences in what would eventually become such a visible piece was not met without backlash. The mention of family honor and never speaking of familial conflict kept coming up, so the real question is how did writing this book affect her family dynamic? Did she find the response coming from male or female family members?

The relationships among my mom, my grandma and me, grew deeper, Sital said. What was difficult was my extended family, and, interestingly enough, most of that blowback came from the women—my aunts and some of my female cousins.

She continued saying that the backlash was not as simple as hushed family gossip, “my aunts threatened to sue me, demanded to see portions of the book and told me I had no right to tell this story. And they did all of this without ever once asking me what the story was about.”

Not once in all that time did they ever ask me what I was writing or why I was writing it, she said. Neither did they give my mom or grandma a chance to explain themselves. I suppose it was easier to target me since I was the one penning the actual words. Ostracizing a niece was preferable to muddying the relationships with their sister or mother.

Undoubtedly, the way domestic violence is handled outside of the U.S. is markedly different. Sital speaks to the way Trinidad and Tobago respond to DV:

As an advocate for women’s health and rights, I have very strong feelings and language concerning this,” she said. “When the prime minister of a country, a leader, a person the people look to for guidance and support blames and condemns victims and survivors for criminal acts done to them, that person should be stripped of their power.

Keith Rowley went on camera and his response to the rise of domestic violence in Trinidad and Tobago was, ‘I’m not in your bedroom, I’m not in your choice of men…you [women] have a responsibility to determine who you associate with and know when to get out,’ she explained. The acts of domestic violence result in murders, the deaths of mothers and daughters. His response to criminality, is this? It’s disgusting.

Aside from her work and her activism, Sital has gone on to have a family of her own and is very happy to share that discussions surrounding family history and culture are already happening under her roof.

My parenting motto has always been open communication on all topics. While that has definitely backfired in hilarious ways many times already …I’ve learned in the process of writing this book that these conversations are important and so, in language my kids can understand, I’ve been tackling a lot of these types of questions since they first attended one of my readings, and while they are difficult, I feel a bond between us growing, she said.

Sital’s work in her personal life as well as sharing that work in her art encourages women like myself to not be scared of those conversations, but with so many personal moments revealed page after page the notion of maintaining one’s mental health comes into play.

I wasn’t aware that I needed to take care of my mental state while writing the book but I found myself doing just that .With each major writing project I undertake, I find that there is something that runs parallel to it that helps me to maintain a healthy psyche, Sital said.

During the writing of ‘Secrets We Kept,’ that activity was salsa dancing. My partner and I took weekly classes for years and years and amidst the chaos of life, that was the one thing I could just lose myself in. When I was twirling around a dance floor be it for our weekly lessons or on the floor of a dance club, I entered a different version of myself and my body and mind were focused on that one thing. We still take dance classes together because we’ve both come to love it so much and we’ve since moved on to learning the cha-cha which is even more fun! For my current project—a novel—I’ve moved on to learning to play the cello this past year.

Ultimately, Sital’s memoir has found a very special place in my heart and I don’t think I can properly express what reading it has done for me in words that do it complete justice.

For years, marginalized women fight to have their own voices heard so much so that we forget we carry the narrative of hundreds of women before us. Dynamic, strong, resilient, neglected, loved, hopeful, fearless, women that single-handedly cultivated and breathed live into a culture that is growing and changing by the second.

Coincidentally, shortly after reading “Secrets We Kept,” I went to Trinidad and as I’ve gotten older my emotional attachment to a land that I’ve dipped my toes in as frequently as the seasons change every year felt more and more like land my hands have indirectly worked on.

I saw my grandmother and her friends and the women at the market so differently than before and was almost instantly overcome with emotion watching those familiar curves of the mountains and the breathtaking blues of the ocean that have seen more life on their shores than any book can contain.

When asked what this book has done for her own life and what it has taught her about herself as a person and an author, Sital candidly said:

This s–t is exhausting. Almost all of this—the book being in the world—was on me and one can do all the right work, garner all the rave reviews, have people love and believe in the book, and still the obstacles will be there sometimes from the very people who helped you bring this book to fruition.

She parted our interview with words of advice to young Indo-Caribbean writers and women, which hums like the first note of a steel pan drum:

You can purchase “Secrets We Kept: Three Women of Trinidad” on Amazon.

If you or anyone you know is a victim of domestic violence, call the national hotline numbers here: United States National Hotline is 1-800-799-7233 or Trinidad & Tobago National Domestic Violence Hotline: 800-SAVE (7283).