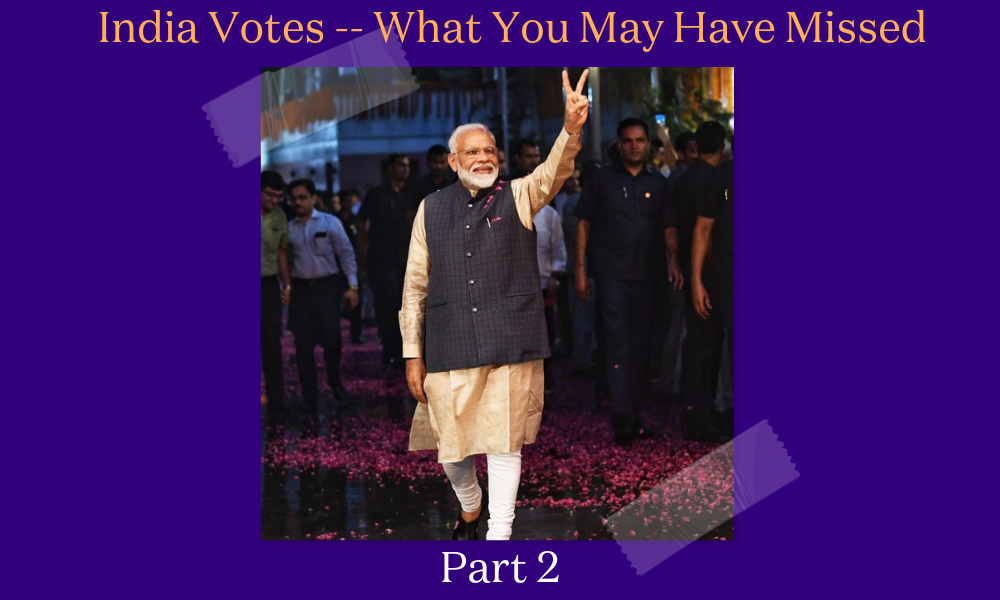 The Indian general elections that recently took place were a big deal. How big? Just look at the numbers alone: There were 900 million people eligible to vote in the last general election and the recent one took place in seven phases, from April 11 to May 19 (with the results announced on May 23, which as we now know Narendra Modi won).

These elections were held to determine the MPs or members of parliament who comprise the 17th Lok Sabha (or the lower house of Parliament).

Here’s a look at how the election went down.

[Read Related: Everything You Need to Know About the Parties that Ran in the 2019 Election]

Structure of the Indian Government and Electoral Process

The Indian legislative branch is parliamentary and bicameral, consisting of two houses of Parliament: the Lok Sabha (lower house) and Rajya Sabha (upper house). The President of India is the head of the legislature. The Prime Minister of India, on the other hand, is the leader of the executive branch and belongs to the political party with the majority in the Lok Sabha. The current prime minister of India is Narendra Modi of the BJP (Bharatiya Janata Party), which holds the current majority in the Lok Sabha.

The Lok Sabha elections are the current focus of the general elections. Members of Parliament will be elected in a “first past the post” or “winner takes all” system in which voters indicate their candidate of choice, and the candidate with the most votes wins. 543 MPs are elected in this way. As it stands in the Lok Sabha, the majority (282 seats) is held by the BJP and its main opposition, the INC (Indian National Congress), holds 44 seats. In addition to these two major parties, there are several other parties which comprise the Lok Sabha, as well. The magic number to gain a majority is 272 seats and whichever party hits that number, outright or by building a coalition, chooses the next prime minister.

The first part of our series on the 2019 Indian general elections covered the history of these two parties, characterized their leadership and touched on some of the controversies which have entrenched these two parties. This part will delve into the key issues at stake in the election and assess where the parties stand on these topics.

Many outside of the Indian subcontinent are eagerly waiting for the election outcome, as the majority party in Lok Sabha will undoubtedly influence foreign policy.

Perhaps the country with most at stake is Pakistan. Since gaining independence more than 70 years ago, the two countries have fought three wars over Kashmir and one over Bangladesh. The tumultuous history has escalated in the weeks prior to the start of the election when a Pakistani terror group claimed responsibility for a suicide bombing of a bus carrying Indian police in Kashmir. What followed were with air strikes on each other’s soil, which have strained relationships further.

[Read Related: Akshay Kumar: Your Narendra Modi Interview is NOTHING BUT Political During an Election Year!]

Prime Minister Modi has backed a “Hindu first” ideology that has painted Muslim-majority Pakistan more as a threat to civilization. He has also played to Indian and Hindu nationalist sentiments, threatening to teach Pakistan a lesson by diverting water away from the water-insecure nation. While being tough on Pakistan may earn Modi points domestically, it could widen the divisions between the two countries and sideline Muslim minorities even more within India, who are likely to vote for the Indian National Congress (INC) as a result.

While the discourse leading up to the election has been dominated by Pakistan, Modi’s foreign policy in the past five years has been largely about managing China’s rise. China’s footprint has grown in the East, forging alliances between Japan, Australia, India, and the United States. Strengthening India’s coalitions with Southeast Asian nations also becomes of increasing importance.

India today has large economic inequality. In 2017, the top one percent owned 58 percent of the national wealth, up from 39 percent in 2010, according to Oxfam. Urban inequality is the major driver of economic inequality, and that is evidenced by the increasing number of urban Indians who are unemployed. Both BJP’s and Congress’ manifestos seek to address economic issues by proposing policies to boost entrepreneurship, clean up the informal and micro, small and medium Enterprise sectors, create jobs and promote foreign direct investment.

The Modi government alleges maintaining the lowest consumer inflation since 1991, the highest average GDP over the last five years (7.3 percent) and lowering the deficit. Additionally, the BJP highlights that India has climbed 65 places to top 50 on the “Ease of Doing Business Index” under their rule. Despite these positive indicators of economic prosperity, Modi’s government has been particularly dodgy about the data behind unemployment and job creation numbers. This year, they were accused of hiding a report that showed unemployment at 45 percent. According to a study by the State of Working India report, more than 23 million Indians are unemployed and over one-third these individuals hold a post-secondary degree.

While the urban employment trend is important to note, most Indians still live in rural areas. In 2014, more than 60 percent of votes BJP received were from rural voters who will likely be a deciding voting demographic in this election as well. In their 2019 manifesto, the BJP aims to double farmer income by 2022. In the past year or two, however, severe economic strife—caused by droughts and stagnant farm incomes—as well as unintended consequences of Modi’s demonetization scheme, which fell heavily on the shoulders of poor Indians—including many farmers, has made the party less popular among these voters. The Congress party saw these pitfalls as an opportunity to win over the rural and low-income electorate by including in their manifesto a cash transfer of 72,000 rupees per year to the poorest 20 percent of Indian families through the Minimum Income Support Program.

Although both parties make mention of gender equity and social reform, the INC more so than the BJP has put forth specific policy changes with regards to transgender and LGBTQ rights. The Congress party’s manifesto, for example, promises to conduct gender sensitivity training for all government personnel, withdraw the transgender bill of 2018 and instead replace it with a bill that follows the ruling of the NALSA vs. Union of India case, which affirmed that transgender individuals should be granted fundamental rights under the Constitution of India. In their manifesto, the BJP devotes only a single line stating that they are committed to empowering transgender individuals through “adequate socio-economic” initiatives without much specificity.

If we look beyond the two major parties, there are candidates belonging to other parties who support LGBTQ rights. The Pink List has compiled a list of candidates and categorized them into 4 categories: trailblazers, which are candidates identifying as queer or trans who are running for a Lok Sabha seat, changemakers, which are politicians who have been instrumental in proposing legislation, outspoken allies, and allies. Trailblazers include candidates identifying as independent or belonging to the Aam Aadmi or Durbhal Ghatak Agadi parties. A notable INC “changemaker” according to The Pink List is Shashi Tharoor, a congressman representing Thiruvananthapuram, Kerala who has written articles, spoken at panels and introduced two bills for repealing Section 377 in the Lok Sabha.

Another major social issue important in this election will be right-wing nationalism, more specifically, Hindu nationalism. Modi’s government has caught major backlash for its ties to the RSS. Modi belongs to the RSS (Rashtriya Swayamsevak Sangh), an organization that believes in Hindutva, the ideology that India should be a Hindu nation. The RSS believes that secularism has “eroded the nation’s integrity.” The RSS gained prominence in the 1980s when Hindu activists destroyed a mosque located where the Hindus believe Lord Ram was born (Ayodhya). In recent years, the RSS has considerably expanded its reach and wielded influence over policy matters as well, with Modi reported to consult with the RSS when making key policy decisions. With one of RSS’ members now at the highest executive office and poised to be reelected, Muslim and Christian minorities have enough reason to be concerned.

Overall, the world watched and waited for the results of this monumental election to be announced to see if the BJP will retain its grasp on Indian politics and society, or if the INC can muster up enough of a challenge to claim the majority. We know how it turned out and now we’ll wait five more years to see this election and voting mammoth in action again.