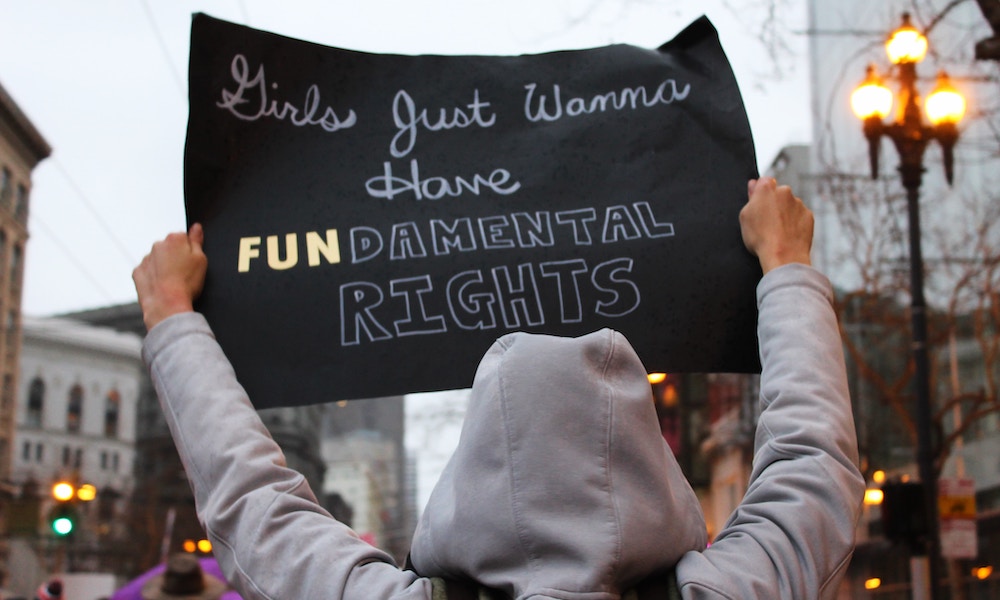 On May 15, Alabama Gov. Kay Ivey signed the Human Life Protection Act into law, banning abortion at any point of pregnancy. With the exception that the unborn child threatens the mother’s life, the law also bans abortions for rape and incest. Alabama’s controversial law follows after Ohio and Georgia banned abortions at six weeks. After Alabama, Missouri passed it’s own “heartbeat bill,” banning abortions at eight weeks.

These laws are specifically architected to restrict how and where women can get abortions, if at all. But they fail to consider that at 6 weeks, most women don’t even know that they’re pregnant, let alone know whether they want to keep the baby. 14 times safer than carrying the pregnancy to term, whereas unwanted pregnancies can negatively impact the physical, mental, social, and financial health of the women who must endure them.

I know there are a lot of men out there who have partners who've had abortions. It's time for you to speak up and be allies. Women don't get pregnant alone.

There are men taking sides in this debate. Currently, 58 percent of men believe abortion should be legal. There were men who protested outside the Alabama State House against the law who were both for and against abortion. Yet the conversation around abortion-rights has primarily been focused on telling women what they should and shouldn’t do with their bodies, and that’s what needs to change.

Women don’t just get pregnant by themselves — men are the cause of pregnancies.

For this reason alone, we men share the responsibility. If we choose to restrict access to safe abortion procedures and pass laws to police women’s bodies, then we’re also choosing to take care of the child if the pregnancy is brought to term. Given that custodial mothers only received $19.5 billion of the $31.7 billion due in child support payments from non-custodial fathers as of 2011, it’s clear many of us are not ready for that.

And if reducing abortion rates is the main goal, restricting abortion access is still not the answer. This would be accomplished, instead, by preventing unwanted pregnancies. Gabrielle Blair, author and the founder of #AltSummit, writes, “Though our society tends to villainize female pleasure, women’s enjoyment of sex does not equal unwanted pregnancy and abortion. Men’s enjoyment of sex and irresponsible ejaculations do.”

We can be fertile 365 days a year from puberty until death, whereas women are not. This means the onus is on men to prevent pregnancy as much, if not more than on women. It means wearing a condom for the entirety of sex. It means considering getting a vasectomy, a safe and reversible procedure that is not nearly as invasive as non-pharmaceutical abortions.

[READ RELATED: Want to Be a Better Ally For Women? Ask Them How. That’s What I Did.]

It also means better sex education for teenagers who are just learning about all of this. In schools and colleges, we hold seminars about the harmful repercussions of alcohol and drug abuse. These sessions are not only meant to educate youth on how those behaviors can negatively impact their lives but also teach them how to engage in those behaviors safely if they choose to. There’s no reason we can’t educate the same young adults on how to have safe sex so that they don’t find themselves having to contend with unwanted pregnancies.

I don’t usually comment on politics but this one got me and is so important. This whole abortion law thing in America is a mess I mean your completely taking away the rights of women and the ownership of the bodies that belong to them. I have so much respect for women Watching someone go through pregnancy and how tough it can be at times and us as men never have to go through that so how can we even comment or decide what women should or shouldn’t go through, it is total BS that anyone is even given that power. It’s bad enough that women have to go through cycles of periods that can be painful without making some of them have to go through with unwanted pregnancies that will literally change the course of the lives they lead at all ages. Here was me thinking it was supposed to be the land of the free it all looks very tied up from where I’m standing. Abortion up to a certain point should always be legal it’s only right that woman are given that choice to make for themselves.

At the end of the day, these unconstitutional bills are additional cogs in a system meant to uphold a conservative white majority. The Alabama law was passed by 25 conservative white men and signed by a conservative white woman for the explicit purpose of combating Roe v. Wade. With five conservative-leaning judges presiding on the Supreme Court, it’s uncertain whether the 1973 precedent will unequivocally be upheld if this law is brought to them.

What is certain, however, is that we are passing legislation about women’s bodies without their input or their voice.

And if we’re willing to ask a woman to reduce the chance of pregnancy with her body, then we need to ask a man to do the same. After all, women’s health is public health.