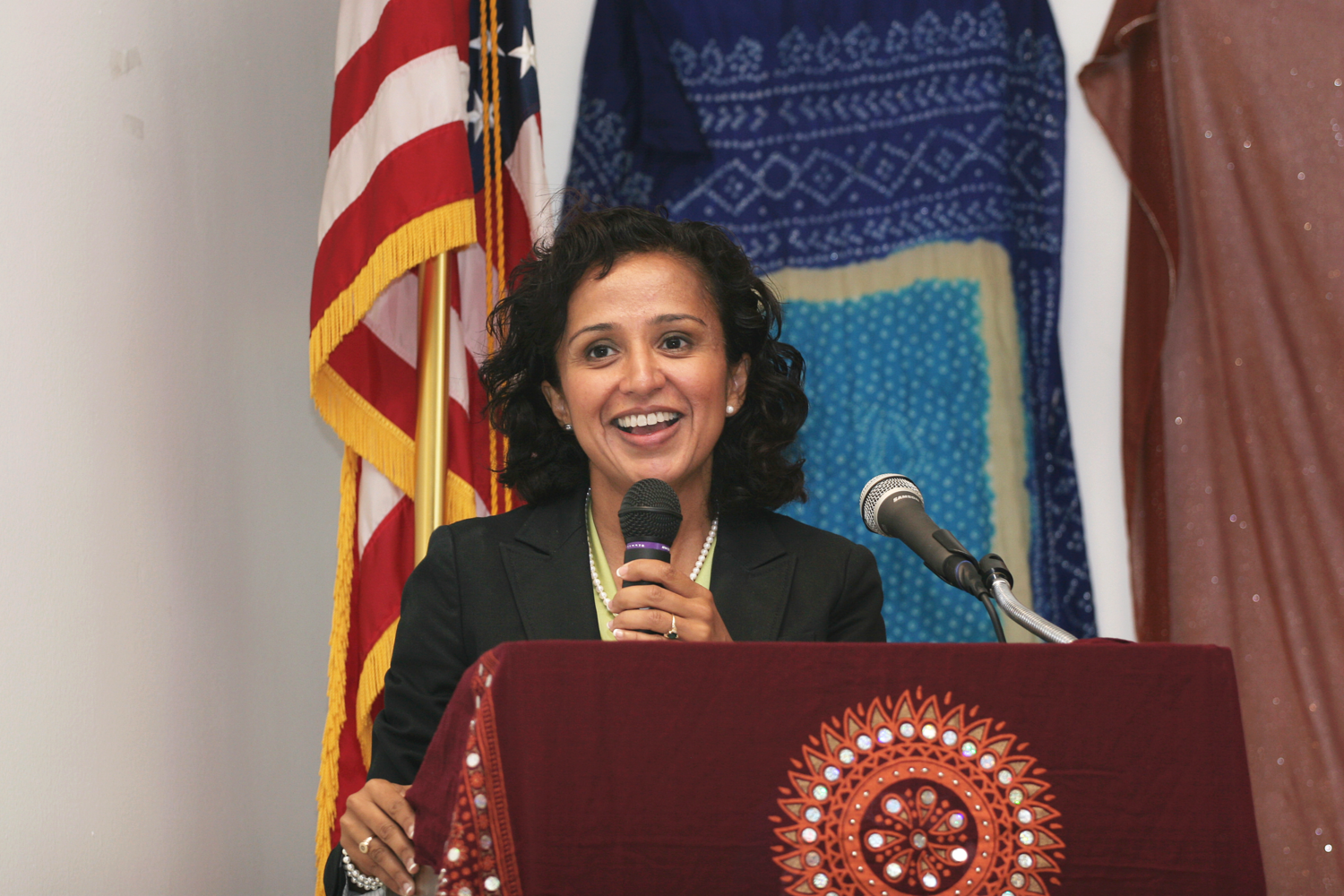 Meet Manju Kulkarni, Executive Director of the Asian Pacific Policy and Planning Council (A3PCON) and a racial justice attorney and activist who has worked on behalf of communities of color for over twenty years. Manju is the former Executive Director of South Asian Network (SAN). In 2014, she received the White House Champions of Change award for her dedication to improving health care access for South Asian Americans. Manju is a fierce advocate, leader and change-maker, and shares with us incredible insights on how women and the South Asian community can continue to elevate ourselves and make a bigger impact in this world. Read on to learn more.

“I was born in India, and my family later moved to Kansas City, Missouri where my parents did their medical residency. We then moved to Montgomery, Alabama and I spent the rest of my childhood there. There really weren’t a lot of South Asian people in Montgomery, but we had a small group of Indian families who would get together regularly. My dad helped start the Hindu Temple Society of Alabama and made sure we were involved in Indian cultural activities growing up.”

“I grew up thinking I would be a doctor like my parents were and continued to follow that path through my first couple years of college at Duke. However, I’d started to become more interested in law and wasn’t doing spectacularly well in my pre-med classes. So after my sophomore year, I went home and told my parents I didn’t want to pursue the pre-med path anymore, and boy, they were really upset. My grandparents happened to be there too and I remember my grandfather recommending I go to community college instead since Duke wouldn’t be worth it anymore. And my grandmother’s solution was to just marry me off instead!

But I went ahead and pursued law anyway, despite not having my parents’ support for a long time. I think law was a great personality fit as I’m a pretty outspoken person. From a very young age, I’ve been really forthright about what I think, have had strong opinions and deeply cared about public policy. I was always that person whom my friends would think ‘oh god, Manju’s at it again!’

It all came full circle when in my late 20s, I was driving somewhere with my mom and she told me that I totally made the right decision to be a lawyer – which was an amazing moment for both of us.”

“My passion for civil rights stemmed from my upbringing in Montgomery. There were many instances going to public school where I’d see my friends on the free lunch program or experience discrimination based on our skin color. My family even went skiing in Breckenridge once and couldn’t get a table at a nice restaurant because of our race. My mother also brought a racial discrimination lawsuit when she interviewed for a position at a hospital. She had been told outright that she was a foreigner who was going to take away American jobs, so they denied her the position.

Right after college, I interned at the Southern Poverty Law Center, which shaped the rest of my career. So going into law school, I knew I wanted to pursue public interest law and civil rights. My first position upon graduation from law school was as a Staff Attorney at the Office of the Civil Rights Monitor, a firm responsible for monitoring the consent decrees in the Denny’s (restaurant chain) race discrimination actions. What was really amazing about this experience was that I became a part of the management team of the firm within a year or two, and was only in my mid 20s. The consent decree ended 3.5 years later, so I then sought a position doing more traditional legal work.

In 1999, I moved to the National Health Law Program (NHeLP).  At NHeLP, I engaged in legislative and administrative advocacy and provided training, technical assistance, and litigation support for health advocates and attorneys to improve access to quality health care for low-income individuals, people of color, children, the elderly and those with disabilities.”

“Then, in 2010, I left NHeLP to become Executive Director of South Asian Network (SAN). In this position, I led a community-based organization dedicated to advancing the health, well-being and civil rights of South Asians in Southern California.

I loved my time at SAN, but after a while, it felt like I needed a change. My older daughter was going to be starting her junior year in high school, and I thought it would be a good time to really focus on her and take a personal sabbatical. You know, we’re on this hamster wheel of life and we keep tiring ourselves out in terms of how hard we work. It’s only when we step off the wheel that we can think deeply and realize our priorities.

I’m now the Executive Director of the Asian Pacific Policy and Planning Council (AP3CON), where we serve and represent the Asian Pacific Islander community (1.5 million people) in Los Angeles. At AP3CON, we’re often working with people who are becoming a public charge – having to choose between getting food stamps, lunch programs for their kids or legal immigration. We’re also focused on leadership development and want to promote civic engagement especially among South Asians. Our parents spend so much time and energy helping us understand our religion and cultural festivals, but very little time explaining to us that we need to vote or understand our history. All the data in the world shows South Asians are not civically engaged which is to our detriment since we are such a progressive population. I want more South Asians to run for office!”

On Leadership and the Status of Women 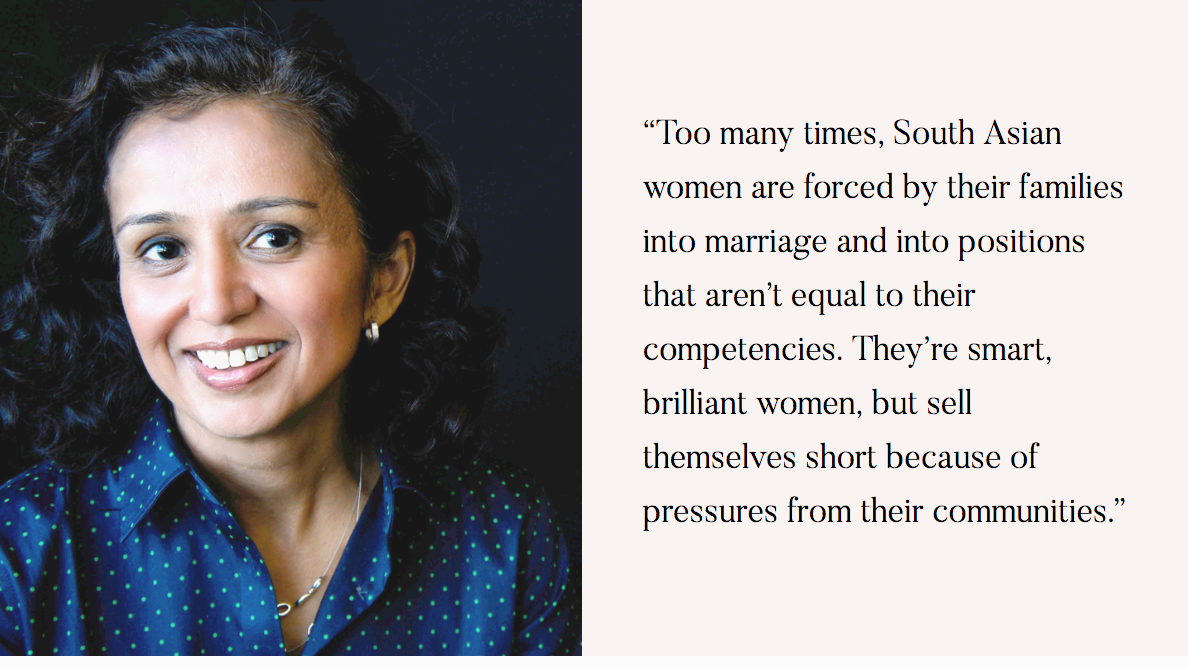 “South Asian women are often not allowed to be outspoken and there’s such an implicit bias against women in our culture. I’ve even been invited to certain temples where women aren’t allowed to speak on the microphone at events, which makes no sense to me.

At SAN, we ran multiple cohorts of a women’s leadership development program with the goal of empowering South Asian women to be bold and courageous. Too many times, South Asian women are forced by their families into marriage and into positions that aren’t equal to their competencies. They’re smart, brilliant women, but sell themselves short because of pressures from their communities. In many cases, the women we worked with felt that marriage had prevented them from being their true selves. One woman told me that all the aunties would ask her why she was traveling so much for work, and would tell her that she wouldn’t have anywhere left to go with her husband, as if life could only be enjoyed through marriage.

I’m also working on preventing women from saying ‘sorry’ too much. We’re saying ‘sorry’ constantly, as if we are apologizing for our very presence on the planet. I think we should be as forthcoming and upfront as we want to be (obviously still be kind, generous and loving). Don’t stifle your voice and give into cultural prohibitions. The world will then be deprived of your intellect, energy and skill set if you don’t go into the world doing everything you can.”

“I don’t think a lot of young, South Asian people realize our history in this country, and that there’s been a lot of discrimination towards the South Asian community for over 100 years. South Asians were not allowed in the U.S. between 1917 and 1947, and even from 1947 to 1965, only 100 South Asians were allowed in per year. In the 1900s, hordes of South Asian people were physically beaten in the Pacific Northwest, and driven out of Washington state and Canada. We were called the ‘dark menace or the dusky peril’ if you look at newspapers from that time period. This bias was what led to the Immigration Act of 1917.

The reason we’re even in the U.S today is because of the Civil Rights movement. So many South Asians today are racist, and don’t understand that they have the black population to thank for being here in the U.S. The Immigration Act of 1965 created the first opportunity for large numbers of South Asians to come to the U.S.

In today’s climate, we’re seeing a lot of activism against South Asians and people of color. So until we band together, become more civically engaged and acknowledge the state we live in, it’s just going to get worse.” 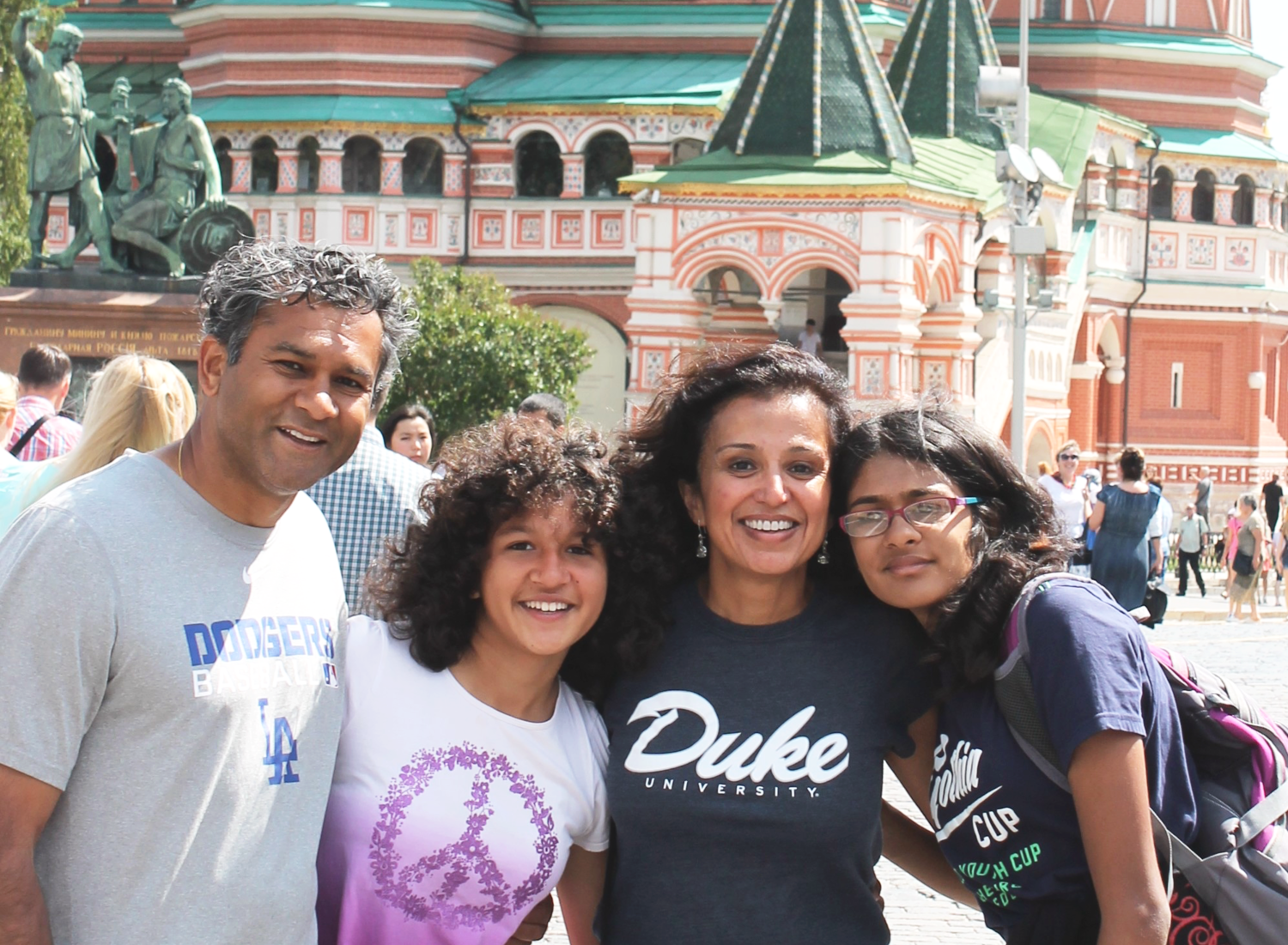 “I lost my father to cancer before I was a senior in college. I remember being at a hospital in Houston for his treatment, and interestingly enough, the chief resident was a Marathi, Brahmin boy. My dad and grandparents immediately noticed and asked me if I’d consider getting married to him since he seemed to like me. I was like ‘absolutely not, I’m in college’ and it was just so ridiculous that we were in the hospital but their minds were on getting me married!

It’s crazy to think that times haven’t really changed – I thought I fought those battles 20 years ago but so many young women still tell me today that they think their parents only care about getting them married off, and not about what they’re doing in the world. This is a global phenomenon in our community. So many of our parents want us to be well educated and pursue our careers, but at the same time, there’s a huge expectation around marriage that they feel like we have to follow.

Now that we’ve been in this country for a while, we’re seeing more examples of people having different experiences, whether it be same-sex or biracial marriages or marriages between different ethnic or religious communities. And these couples are happy, have great kids, and have awesome lives. It’s upsetting to see and hear that this pressure still continues, but it’s important to remember that so many others are going through the same thing and that you’ve got to fight for what you want. Just pick the right battles to fight!” 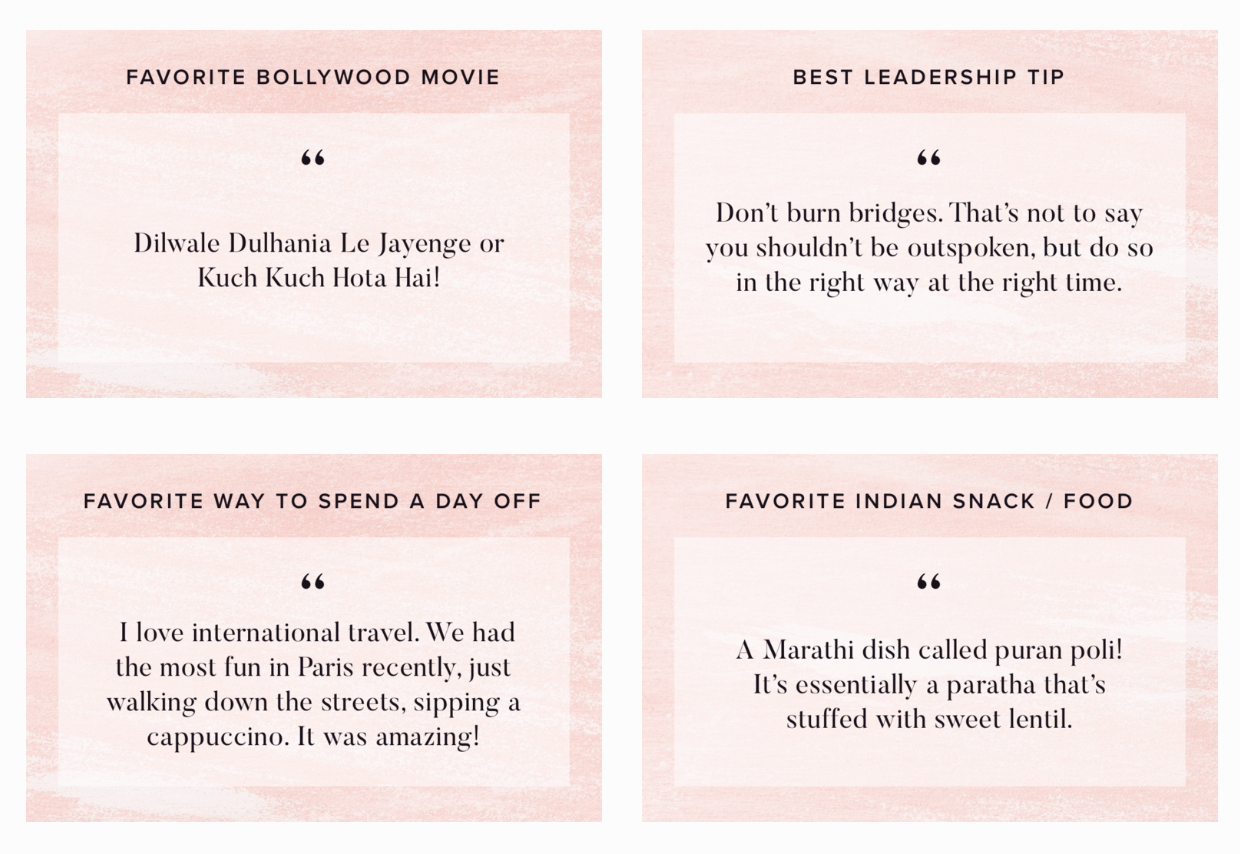