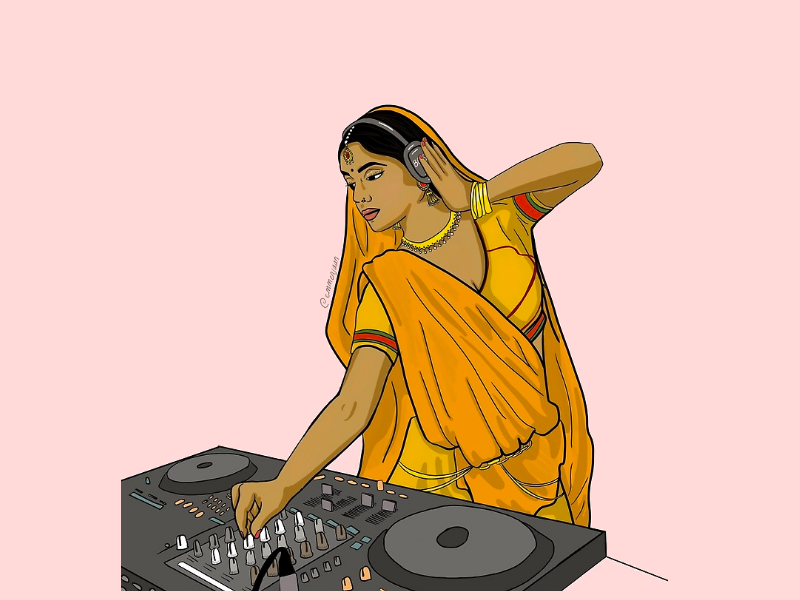 It’s no secret that being a disc-jockey is a male-dominated profession and while I get down with em’ all, ain’t nothing like a woman’s touch- literally. Here are six of my favorite South Asian female DJ’s that got mad mixing skills. Scoot over Mr. DJ, there’s a Ms. in town.

The myth, the legend. New York’s very own DJ Rekha. Where to start and where to end with this trailblazer? Aside from having some of the sickest mixes of all time and starting the infamous 20-year-long monthly party, Basement Bhangra, Rekha pioneered a music culture that did not exist. They took artists popping off in the U.K. and India, and carried their sounds to North America. Outside of their musical pursuits Rekha is a massively supportive member of the LGBTQIA community and spends extensive time collaborating with different organizations such as Chhaya CDC whose mission is to work with New Yorkers of South Asian origin to advocate for and build economically stable, sustainable, and thriving communities. You may have seen Rekha scratchin’ it up at “Ronak” an event they co-curated to serve as a showcase for artists. As the official DJ for the Women’s march and having DJed in the Obama White House, Rekha has created mixes for countless individuals and been inducted into New York’s People’s Hall of Fame. Having just completed her Master’s in Comparative Media Studies from MIT, we cannot wait to see what this culture curator will do next!

Shilpa has been in the DJ game for hot a minute, aside from working with Rekha several times, Shilpa refined her skills at NYC’s Dubspot DJ School and is an Ableton Live Certified producer.  Shilpa can be found producing and playing at Dream Downtown’s Bodega Negra and The Living Room in Times Square frequently.

It’s not your boy’s tour it’s YOUR GIRL’s TOUR. Global Goddess. How we slay the decks around the ?! Brisbane, Australia! GODDESS REMIX in the house. Thank you thank you thank youuuuuu for the lurveeeeeee ?????? Still can’t believe I went to Australia on my OWN SOLO Tour! Hard work pays off! @panjabimc

I keep telling y’all, Canada doesn’t mess around with their talent. Jessica Dhillon has built a name for herself in the digital era. Famous for her EDM and Bollywood sounds, Jessica has honed her craft. Beyond being a  DJ by day (and night), she is the founder of movement, “Crown that Goddess” designed to empower women as well as the CEO of sunglass company, Neto Official and you may have heard her recent track “Doabey Wala” with Garry Sandhu and Kaur B.

Washington, D.C, while some of my favorite people reside in you, I have recently taken an interest in the music community emerging from the greater DMV area. DJ Chandni is on the rise, having played several south asian parties and New Year’s Eve at the Gaylord National Resort, you don’t want to sleep on her!

Talk about a fine ting, DJ Gyal also known as Zeemuffin oozes music, while working for Spotify by day, Zee is a dope DJ by night. Having just played at Ronak Project’s holiday party, and starting her own #ACTIVE movement at Brooklyn’s Kinfolk, you do not want to miss her vibe. You also may have seen her at Brunch Bounce’s Heat Wave 19 on Saturday, June 1.

Y’all know I love BBC Asian network, right?  I lost out on so many years of magic not knowing about DJ Kayper. Producer, presenter, and DJ, there’s not much Kayper doesn’t do. This UK transplant has infiltrated the industry and built a legacy with residencies at the world’s most coveted party spots such as Hakkasan, Marquee and Ministry of Sound. As if all of this wasn’t evidence enough, Kayper keeps it coming having performed at festivals such as; Neon Carnival Coachella, Lollapalooza,  and SXSW, to name a few. She integrates several genres into her mixes, the crowd never stops moving and it is a legitimate pleasure to watch her spin. Please see the most dope thing you’ve watched this week, here. You’re welcome.