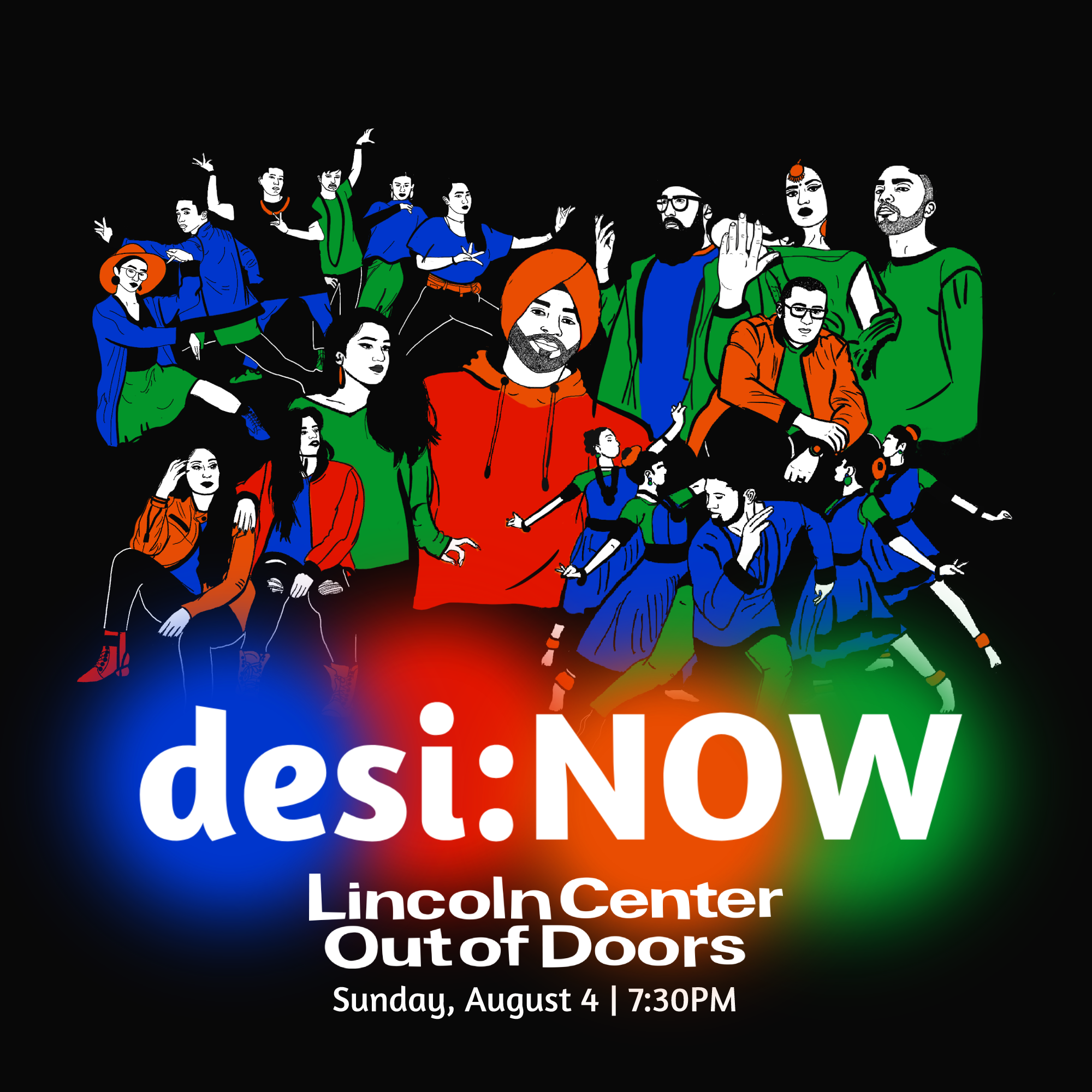 Growing up between cultures, first and second-generation immigrants of the South Asian subcontinent have been creating a space for self-expression that acknowledges their hyphenated identities as desis outside of South Asia. To continue paving the way for more of us, desi:NOW — produced in partnership with Lincoln Center Out of Doors — showcases South Asian-American identity through the performing arts. The show is curated by Heena Patel of Mela Arts Connect and DJ Sharad of 44MGMT — both long-time culture connectors in New York City. We sat down with Patel for an exclusive behind-the-scenes look at what desi:NOW is and what you can expect to see this Sunday, August 4th at Lincoln Center in New York City.

What is the mission/vision of desi:NOW and what problem does it solve?

Growing up between cultures, first and second-generation immigrants of the Indian subcontinent have been creating a space for self-expression that acknowledges their hyphenated identities as desis outside of South Asia. desi:NOW showcases modern South Asian-American identity through the performing arts.

Though there have been spaces that have been built over the years for South Asians to be able to express their view of the world, most of the spaces in which these artistic expressions have been showcased have been for desi audiences. desi:NOW brings these forms of music and dance to one of the most prestigious performing arts centers in the country and world. Lincoln Center Out of Doors is the country’s longest-running outdoor summer festival and is attended by thousands of people each night of diverse backgrounds. Through this platform, we are able to bring attention to the brewing cultural change happening in the community and elevate talented artists in our community.

What makes desi:NOW the event of the summer?

desi:NOW isn’t just a show to attend, it’s a weekend of activities that are going to highlight various different aspects of what it means to be a South Asian-American. There are many ways to participate, learn and experience the culture and it’s all free!

So many children of Indian immigrants began their arts journey learning traditional dance in the basements and community centers. As these children have grown up dance training has evolved into workshops of every kind, from Bharatanatayam to Bollywood. We’re so excited to bring free dance workshops, led by some of the leading choreographers who create their own styles of dance.

Ahead of the concert itself, we are going to be talking about the history, the present and the future for desi culture through a panel discussion, featuring some of the movers and shapers of the scene, including the founder of the Indo-American Arts Council Aroon Shivdasani, the the founder of Product of Culture Archana Misra Jain, and artist and entrepreneur Himanshu Suri. The panel is hosted by DJ Sharad and DJ Juicy and will be recorded live for the Butter Chicken Podcast so people who can’t be there in person can also hear the conversation.

The weekend closes with our flagship event, the desi:NOW concert in Damrosch Bandshell for Lincoln Center Out of Doors. The best part of all of this is that every aspect of this weekend is absolutely free to the public!

Tell us about the partnership with the Lincoln Center? What is their role?

The Public Programming team at Lincoln Center wants to make sure that their programming is reflective of the cultural diversity of the city they are in. Several years ago, I began working with them as they wanted to make sure the South Asian community was represented with intention and authentically. Jill Sternheimer and Olivia Fortunato (the Public Programming team) have been all ears for ideas that I bring to the table and provide a great amount of support in creating unique arts experiences.

desi:NOW is the third production presented in partnership with Lincoln Center as part of their summer programming. In 2017, we premiered my touring show Bollywood Boulevard at Lincoln Center Out of Doors. Last year, we brought a quintessential Gujarati social dance experience to Midsummer Night Swing with Garba360.

My endeavor is over the years, we showcase the multiplicity of the South Asian experience. Each year, we have been able to showcase different artists and different aspects of South Asian culture.

This year, desi:NOW is part of their free summer outdoor festival called Lincoln Center Out of Doors. It is the country’s longest-running free outdoor festival, and features over 20 performances of music, dance, and film over the course of three weeks. This stage has seen performers like RZA, Mavis Staples, Angelique Kidjo, Dance Theatre of Harlem, Alvin Ailey, and now genre-bending desi artists.

Give us some tidbits on each of the performers?

When curating this program, we wanted artists that represented different aspects of what it means to be a South Asian-American through the Urban Desi music and dance lens. There is no one definition of sound or style that is Urban Desi, so we are just starting to explore the complexities of this line-up.

The concert features international powerhouse Punjabi singer G. Sidhu; crystalline-voiced singer-songwriter and Television Academy honoree Rianjali; rap, R&B, and hip-hop artists Taizu, Rolex Rasathy, and Robin Dey; plus Desi and hip-hop beats from DJ Sharad and performances by Urban Indian dance company IMGE Dance, SA Grooves who fuses Hip Hop movement and grooves with South Asian music, and Project Convergence that brings together Bharanatyam with Tap. The artists come from different South Asian countries, different music and dance training, and even different parts of the United States, so there are going to be a lot of variety in the expression of South Asian-American identity.

Tell us about the team, who is curating the event?

My team and I at MELA Arts Connect have partnered with 44 Management, led by DJ Sharad, to curate this event. Both teams come from different backgrounds, but share the same goal to elevate South Asian arts and culture.

Why do we need more events like desi:NOW across the country?

South Asians contribute so much to American society and culture — be it in science, business, or even spelling bees. When it comes to the arts and music, we are not as well-represented in the mainstream arts and entertainment but are creating wonderful work. Events like desi:NOW shine a light on the work that is being done outside of traditional forms of South Asian arts. We are a diverse community with diverse experiences. We’re not here to fit a label and that’s just the beauty of an event like this.

Learn more about the line-up of desi:NOW events starting on Saturday, August 3rd here, and register for FREE! With three back-to-back dance workshops on Saturday, a panel discussion hosted by Butter Chicken Podcast on Sunday afternoon, and the show itself on Sunday evening, there’s lots to do in New York City this weekend.