My name is Shayoon Mendeluk (aka @Shayoon_), and I live on a magical island in the Meditteranean Sea, on the east coast of Spain, called Ibiza. The third most magnetic place in the world! Ibiza is known for its party scene but what many don’t know is the strong spiritual community and vibe is just as strong.

I was born in Nairobi, Kenya and have family roots from India and Pakistan. I grew up Muslim, and I have lived all over the world from Africa to Saudi Arabia, to England, and then my family settled in America. I kind of grew up in Oklahoma, from 9-18 but fast forward to after high school, I decided to move to Los Angeles on my own where I truly believe I grew up!

I went to school for fashion, business marketing and management and worked in fashion, and became a business owner at 23. I fell into the festival scene super early and went to Coachella when it was super non-commericai and was only one weekend.

HOW I MET THE ONE

I met my husband at Coachella 2010. He says he firsts saw me dancing in a field of 100k but for myself, in my zone, he didn’t want to interrupt my flow and hoped he would see me again, and later that evening he did. I saw this gorgeous boy with no shirt on, and I was not sure what was happening. Next thing I knew there was a blanket over my head and I was whisked away to sway to the beats with the super charming Alexander Mendeluk, the creator and founder of the phenomenon Spirithoods, created the multi-million dollar overnight success in L.A. and had just launched when we met.

Long story short we had to part ways and meet up with friends and tried to meet up again after the show, but it didn’t happen, and I was sad but was like okay whatever was just a beautiful thing for a minute.

Fast forward a few months I run into him in L.A. at a bar, not once but three times until I was like fuck, okay this is destiny, I’ll give him a chance. You want to know the fucked up part of this? I was avoiding him because I was too scared to get close to someone that wasn’t of my culture and religion. I felt for some reason it just would get shut down and I should just not take this chance. Huge fearful unnecessary projection on my part.

We got super serious super quick and I started to panic a bit. I had never in my life felt the magic he made me feel. I knew he was my person, I knew he was my twin flame, my soulmate. The thing people swore existed, that fairy tale love. I was just a baby, only 23 when we met! He was 24, and we were so in love. A kind of love we said was meant to inspire others. I had no idea how to even mention this to my family.

Why? Because of the cultural and religious programming that was so deeply ingrained into me from such a young age. I was so ashamed to even have to ask him to keep our relationship quiet at first. He was such an open book and so deeply honest and full of love, who could say no to that? So, at first I did what most desi girls do and I went to my mother. Who was super cool because that’s just who she is and I am lucky. But she had a fear that my father wasn’t going to like it, and she was nervous for me to speak with him about it. I mustered up the courage to speak with him (over the phone) about it and totally dimmed the light on the real love I was feeling, again because I was living in fear. He was being cool and said invite him to come to Toronto when we will all be there for the Indian Film Awards. I was mostly in shock that he was like okay, let’s meet him, but mostly that he was inviting him during a public family holiday!

HOW HE MET THE PARENTS

We took a flight to Toronto from L.A. and the entire time I was freaking out. What would happen? Would they accept him? I cannot believe this is really happening…I have a boyfriend (which publicly has never been known). We land and my father and uncle are waiting inside by baggage claim. This moment changed my life forever. We came down the escalators and I saw my father standing there all dapper per usual and Alexander was on the step in front of me and when the escalator hit the ground my father walked up to him with open arms and embraced him and just wept. It was like as if he knew how special he was. They embraced for a long time until I joined, and just like that everything was okay. The lesson here for me was that I never had to have this fear. I just had to be honest. I was programmed from the culture and most of the desis around me that it wasn’t okay to date, to accept outside the culture, to wander outside the religion. How could I underestimate the man who helped give me life wouldn’t just want happiness for his daughter? Even though my father was a religious, devoted cultural man, he loved and accepted my decision because, in the end, he doesn’t have ego or pride when it comes to the happiness of his daughter. My mother always supported me my whole life, and even she was in shock but so incredibly happy to see my fathers love for Alexander come so naturally and pure.

That next Coachella he proposed to me in the same spot we met, and that winter we wed on 12.12.12 in Vancouver where his father was shooting a movie. We skipped the giant desi wedding, and literally only had my parents and his parents there. We left for our honeymoon to Peru and have been together ten years now! 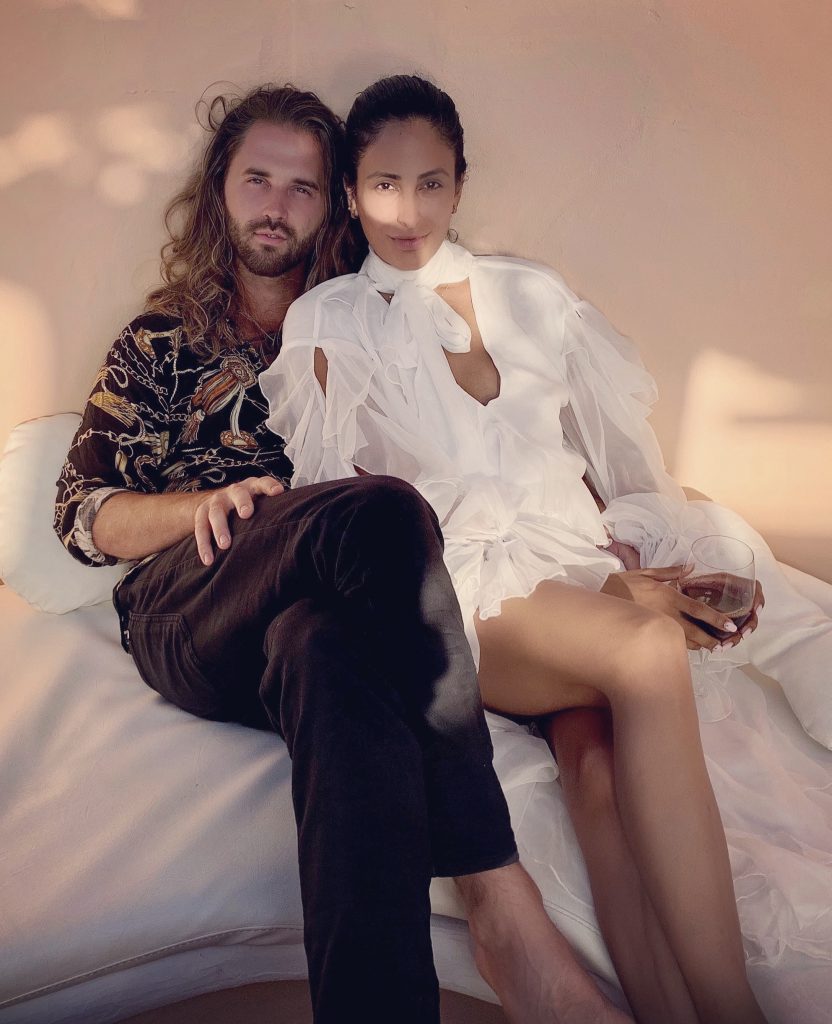 I get hundreds of messages, emails, DM’s asking me constantly how I did it. How I had the guts, and courage to stand up to my parents. And, since it’s been so long I forgot how intense it was at that moment to reveal the truth. But for fuck’s sake. Do we really still live in a world where our parents are so stuck in their ways and programs we fear them so much. It breaks my heart and is one of the few things that still aggravates me.

My advice to all of them is to always lead with your heart and express your love through LOVE. Don’t dim it down, don’t beat around the bush. Stand up for what you believe in and what you know is true. Do what you want for yourself! Set an example. Break the barriers and boundaries. Teach and show them the light. And then only after you’ve tried with compassion and love can the message resonate.

Living in fear causes and manifests into illness and disease. Fear is a disease. You don’t have to be pressured into a career, a relationship or any of that bullshit because your parents want that for you. It’s emotional blackmail. Do you, do what makes you happy or you will live the life you’re trying to escape forever. If you’re unhappy change your life. We make shit so complicated sometimes. But guess what? You hold the power to EVERYTHING. Your mind and body is the strongest thing you have, and when trained and used properly, can generate anything you want.

I lived in L.A. too long. It wasn’t feeding my soul. It got me diagnosed with chronic anxiety and fear. So I decided and made the choice to change my life forever. I started to move into the wellness scene and began my healing journey. Long story short, I reprogrammed my horrible programming and took the path and title as a healer. I have been trained in Reiki, prana, quantum healing hypnosis, channeling, the list goes on. After we both started to shift our world and become awake and more conscious we decided we outgrew L.A. We needed more substance. We didn’t like it anymore so we bravely packed our shit in two weeks, put it in storage, got a plane with our wolf and moved to an island with one suitcase. People often think money is the only way to make dramatic moves like that. But it’s not true. It’s your will. If you have the will and passion anything is possible!

In the two and a half years that I have been here in Ibiza (two without any belongings of mine because we just got it shipped from L.A.) I started a new business venture I used to dream of (literally in L.A.). I recently opened a luxury apothecary and healing center called The Lightforce Center in the old town of Ibiza. I started my own CBD collection consisting of face cream, body balms, gel caps, and oils, and I birthed the most beautiful baby boy in my home, completely naturally, and have become a huge advocate for breastfeeding, especially in public. My husband opened a social media marketing and advertising agency in Ibiza that unifies conscious creators and helps people and young entrepreneurs find their purpose. 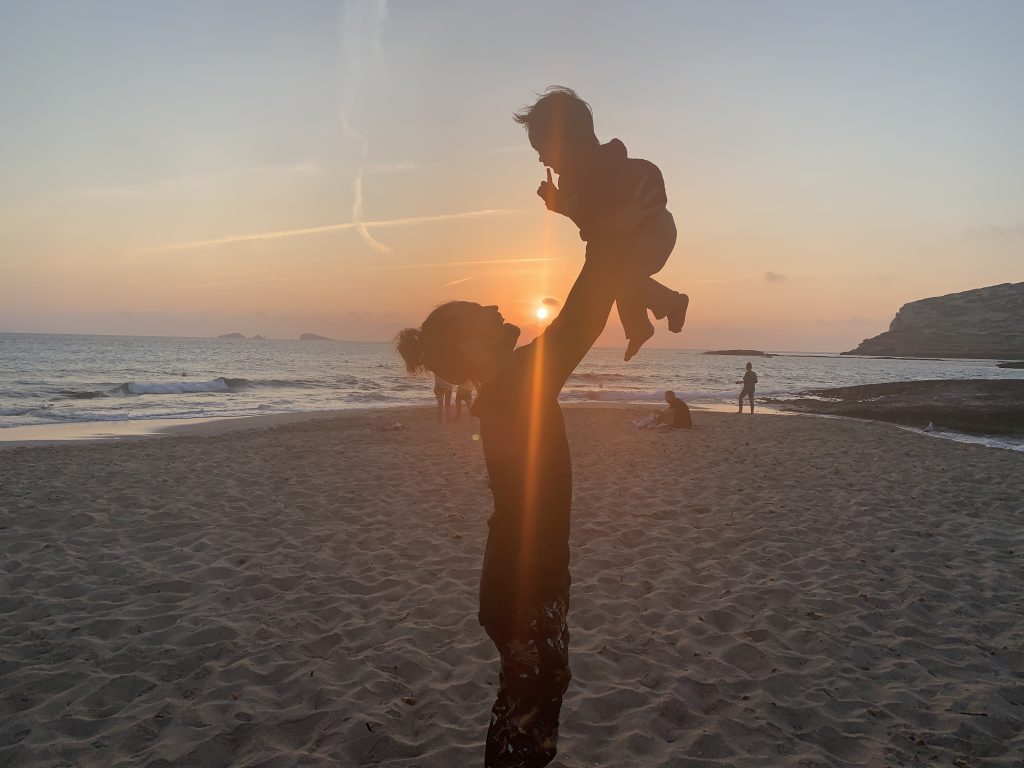 I found my purpose, which is to help create positive change in any and everything I do. To live a life of purity and purpose. Life is way too short to be living in fear, to not do what you love. Leave your fears, be in the present. Don’t worry about the past, or the future because they don’t fucking exist. Find your purpose. The purpose of life is to live your purpose!! Heal, grow, and then help others do the same! If you need help…hit me up!

I am Shayoon, a brown woman who married a white boy, ate her placenta, has multiple tattoos, shows her skin and is half-naked most the time if not fully, breastfeeds in public, is unapologetic and is most importantly happy because I chose this life.

The following piece has been edited post-publishing.

Shayoon Mendeluk is a mother, healer, and positive change influencer living in Ibiza whose aim is to help individuals heal and find their true purpose by unlocking their highest potential.