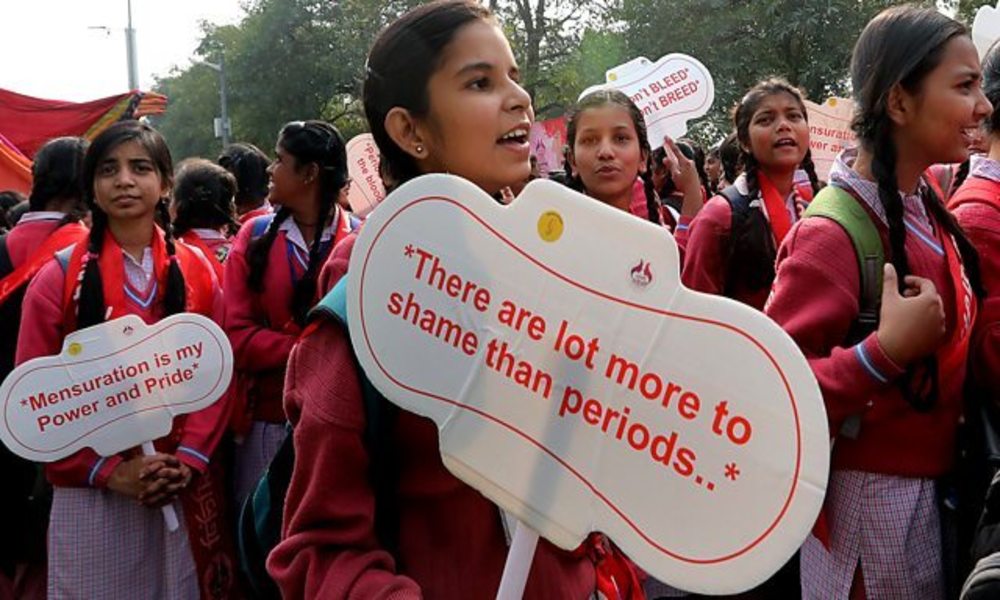 KOCHI, India—During the day, we did news reports on Indian politics and religion and every night we were there, I longed for a swim in the hotel pool that overlooked the Vembanad Lake.

Except, I couldn’t swim because I was menstruating for the majority of the week we were there. My Palestinian-Jordanian mother raised me to use pads as Palestinian culture has taboos that surround tampons, including the possibility of devirginizing oneself while inserting a tampon.

After seven days of menstruating, on the night we were leaving, my wish finally came true. My period ended and I could swim! After several laps around the pool, I took a break. One of the women traveling with us asked if I had used the pool before. Explaining my situation with periods and using pads instead of tampons, she understood and sympathized as she was also from a Middle Eastern background and knew all about the taboos.

The striking part of the exchange wasn’t connecting to a fellow Middle Easterner with similar experiences. Rather, it was the critical looks from other women in our group. I felt the need to justify my use of pads as a Palestinian Muslim woman.

Similarly, while talking to women during a trip to Kerala for work, I noticed the same inclination to talk about menstruation. Their fixation on menstruation suggested a craving for this particular topic and it piqued my interest to find out why.

Indian women live in a culture where menstruation is more than a biological fact. Menstruation is impure, unnatural and scary. While I don’t think twice about having access to sanitary products, Indian women in Kochi, Kerala who have faced difficulties getting pads in the past, are using menstruation as a vehicle for empowerment. The paradox of Kerala is that it’s a literate state with high numbers of educated women. However, many women say they still cannot openly discuss their menstruation.

Dialogue about menstruation in India only began recently. The main drive? Religion and politics.

Despite being a secular democracy, Hinduism is at the heart of India’s culture. Hinduism differs regionally in both belief and practice but many variants expect women to withdraw from society while on their periods. In some rural areas, women stay in huts while city women stay at home. Restrictions like that came to a head in 2018 when the Indian Supreme Court ruling ended a ban on women of menstruating age from entering a temple in Kerala. The local government supported the ban but many Hindus demonstrated against state interference in religion. This, in turn, incited counter-demonstrations by women who favored the ruling. In January 2019, Bindu Ammini became the face of the demonstrations as she was the first woman of menstruating age to enter the Sabarimala temple in Kerala.

The Sabarimala protests shifted the menstruation narrative. With the buzz around Sabarimala increasing, women are taking advantage of opening up conversations surrounding menstrual taboos and access to sanitary products in the public sphere.

Before leaving for India, I had read about the Sabarimala protests and knew that menstruation was quickly becoming a topic of interest for Indian women. I participated in the dialogue by listening to the concerns of women. Added to the ongoing struggle to openly talk about periods, women in India also have difficulties with accessing pads.

My first experience with menstruating while traveling occurred while I was visiting family in Amman, Jordan. My family and I were traveling through the Jordanian desert when I experienced my first menstrual cycle overseas. I felt the cramps that preceded my flow and I knew that if I didn’t use protection, I’d bleed all over our car.

I announced to my family that I had gotten my period. Being in the middle of a desert, we had to find a town where we could purchase pads. We finally found a pharmacy outside of Amman which taught me the biggest lesson—always be prepared while traveling.

Amman lacked good quality sanitary products so having had that difficult experience, I planned and brought an entire pack of pads with me to India. From experience, I knew that pads outside the U.S. aren’t as effective as American ones in protecting against leaks.

[Read Related: On Religion and Menstruation: How Fighting Taboos Starts at Home]

While traveling through India, I saw many ads and billboards showcasing different brands of pads. Still, Indian women told me that they feel silenced if they want to talk about the taboos surrounding the female body. It’s okay for female bodies to be commodified—a pad company can openly sell its product—but it’s harder for women to take control of the narrative and speak publicly about their experiences.

I came to India with an Orientalist perspective. I generalized the culture based on different stereotypes. I thought I knew everything there is to know about Indian women and their experiences but my time there showed me something different than what I was expecting.

Periods are about cramps, hormone fluctuations, accidental leaks and so much more. Nothing beautiful transpires when the uterus sheds its walls’ lining. The beauty of menstruation is the strength of women: Turning a natural, biological function into a form of female empowerment. I don’t enjoy bleeding but I don’t allow society to shame me for my body and its natural cycle. It’s liberating to personally meet women around the world who are also fighting for the same cause.

A California native, Amar is a writer before anything else. Born to an immigrant mother and refugee father, her passion for social justice stems from her roots. The stories she loves most are the ones about people from different backgrounds and unique experiences.