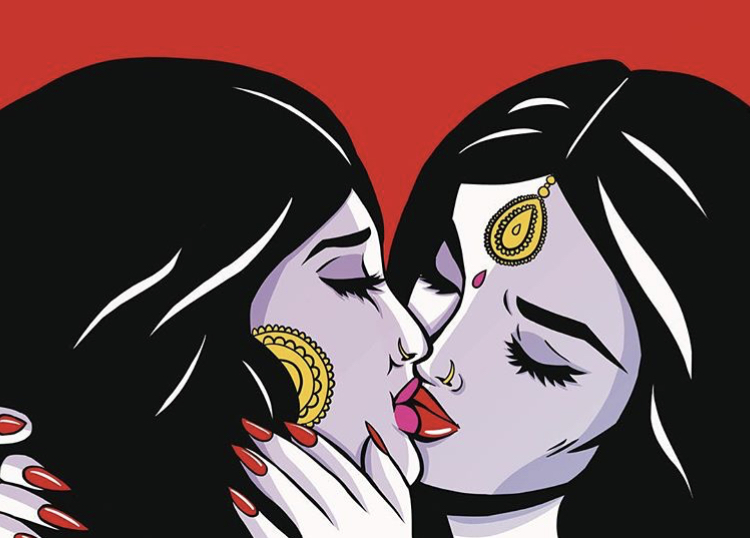 Queer culture in India is on a long journey towards true inclusivity. Although, since Section 377 has been decriminalized, or even before when young India was starting to come a little closer to accepting the LGBTQ+ community; Indian society was well aware and concerned about this community. In this process moving towards this new world, we forget about our “happily” married Indian housewives. A couple of weeks ago, I wasn’t even thinking about them in any particular manner. It was never a topic, I thought, that needed to be talked or even thought about. After all, they were married, and they were “happy.” At least, that’s all I thought about these ladies, until now.

Finding myself deeply made me realized I am lesbian. At the age of 14, I fell madly in love with a girl from my school. She loved me back and we spent a good eight years in a “secret relationship.” Then we separated.

It’s been nearly nine years and it is just now that I have come to learn about a whole new
world of married lesbian Indian housewives. Being an introvert I didn’t use to talk much with both strangers and or even those I knew. So making online friends was a question of out of syllabus.

[Read More: The Internal and External Struggles of Being Gender Nonconforming]

However, there was this one gentle lady who kept messaging me untiredly. She put in a
good amount of effort just to talk to me, to build a friendship with me. Her efforts and
attention did attract me and today, almost one and half years later, we have become
best of friends.

At the time, I obviously didn’t know what I was signing up for. I didn’t even think
about it. But, now I know that it was the opening of a new chapter for me.

So, after talking to her for some days, my shyness dried slowly. I felt comfortable with her and I think she also felt the same for me. Then, one shocking day (it was night actually), when we were talking (texting, I mean) about our usual stuff, she asked me suddenly, ‘Aap lesbian ho kya?” (Are you lesbian?).

I said that the night was shocking, but not just because she asked me that, but because of what she said afterward. I read her text and simply replied with “yes” without giving much thought. Then she replied with the words “me too.” That shocked me. I asked her if she meant what I understood by that “me too? text and she said, “yes, I am also lesbian.”

She followed that message with another message asking me why I was so shocked. I took a long pause just to reread the whole conversation. It wasn’t long, the conversation was just had started. Still, I took a moment. She also told me that she had a girlfriend. I was shocked not because she came out to me as a lesbian but because she was in a hetero
marriage with two kids.

That was my first encounter with a “happily” married lesbian Indian housewife. Over
the year since this conversation, I know her a lot better. We talked about our lives and I asked her about her marriage. How does she manage to be in a hetero marriage after knowing she is lesbian? Well, all she managed to reply to that question was that her husband is such a good person, her in-laws, who are no more alive now, were also very kind-hearted.

Now that they are dead and her husband has no one in the family and she is everything he has left, she has no option but to stay in that marriage. Which led me to think about her sex life and I couldn’t resist the curiosity. And all she said about it was that, “Pehle bahut accha lagta tha, lekin abhi din bhar ghar ka kam karke, do baccho ko sambhalne ke baad energy nahi rehta hai aur accha bhi nahi lagta hai mujhe aj kal ye sab” (it was fun first, but now after working for the whole day and managing two kids, I don’t have the energy and besides, I don’t like all these now).

So I asked her what she does when her husband wants to have sex. Then she said,

Occasionally I do sleep with him only to stop him from going somewhere else, and some other days it just happens without my consent.

That last statement shocked me and caused a little pain too.

It showed me the harsh reality of Indian housewives who are queer. It also shows the
cost these women pay for the low divorce rate of Indian marriage touted across the world.
However, she is not alone in this situation, I later came to know. These happily
married wives have created their own world through social media. The majority of them have a secret social media account apart from their public account. One of the two shows the life they live publicly and the other is their dream life. So these women use their secret accounts to connect with other queer people and lesbians (mostly happily married Indians housewives) all over the country.

Ironically, they found each other and they all are secretly in relationships with each other. Some have even gone international like to Pakistan, Philippines, Sri Lanka to have their dream relationship. And others are just happy with their countrywomen. They are
so happy in their relationships that some of them even have two or three girlfriends at the
same time. Most of them have never met each other in person, although each case has its
own exceptions. They talk on phone calls, video calls, they have group chats. The most
amazing part to me is that they have also managed to maintain a sex life just through phone and video calls.

When I first got to know about the lives these women are living, it left me with my
mouth shut and mind thinking in a speed like never before. What these women are thinking
about them, their lives, their family, husband and kids and most importantly their future is
still a mystery to me.

[Read More: I am Just as Indian as I am Queer]

I’m still in the process of learning more about these them, these “happily” married Indian housewives. Every day I speak with them awards me new surprises. They have made a home; a home unknown to people other than themselves. These women don’t want to leave their husbands but they want to have a relationship of their own choice which is not with their husbands; both at the same time. They are happy living like this. They are used to their lifestyle.

Some want an out but don’t have the courage. They named this cowardness as optionlessness. Things like reason, justification, validity seem to be inapplicable in this situation. The real work we can do here is taking a step of inclusivity towards these women. In today’s time, where inclusivity and representation are becoming such a burning topic, these women are left behind their ghoonghat without an identity, without a choice, and without even a place in our thoughts. No one has ever dared to look closely behind those ghoonghats. It’s time for us now to hold it back for them, take a look, and give some support.

Jimi, started her career as an advocate professionally. On the way of finding herself she felt strongly for writing and thought about give it a shot and became an accidental writer.