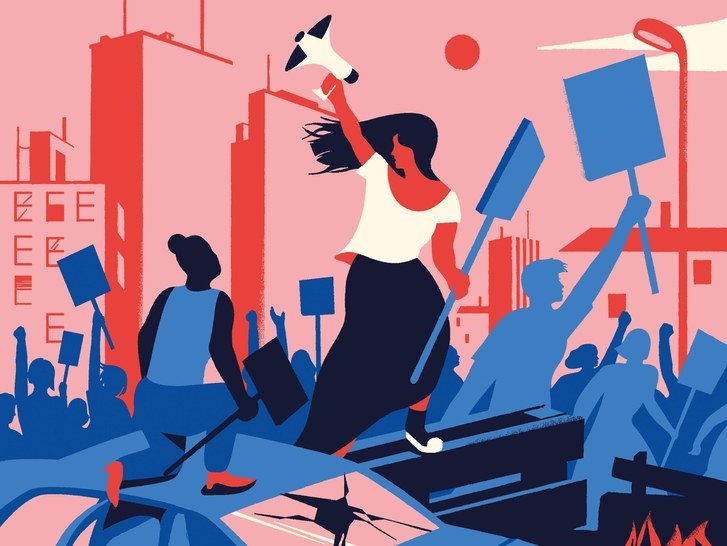 Growing up, I was either feared or was ridiculed. I was told to “chill” more often than I care to remember. I often feel isolated after being berated about my politics. Being a South Asian woman with an opinion is not cool.

Today, we have so many amazing role models. Women of color are in political spaces, and they’re shining. We see Leftist women of color in politics, and it shows how far we have come from the representation I saw growing up (which comprised of the “Cheetah Girls” going to India). That being said, this isn’t just about representation. This is about being a brown woman who is a Leftist.

My personal experience with this matter was wild. I grew up in a very open-minded family. Even before I fell in love with Leftist ideologies, I leaned far to the Left—I was a Democrat for ages because I whole-heartedly supported LGBTQ+ rights, socialized healthcare and ending the wars abroad. But as soon as I learned the atrocities of capitalism, imperialism, and colonization, I turned that Democratic ship around real quick—and the rest is history.

Of course, as most history goes, it was rough. I was shocked at how few people accepted my views. I was young and naive but being openly mocked in a college classroom for bringing up Marx isn’t that fun. I had to fight hard, not just in my white college space of Public Policy, but also in my South Asian friend group. It felt like pulling teeth to get any of my friends to listen to me. Oh, most people had their (centrist) political opinions, sure, but it wouldn’t stop them from dropping the N-word well into college. That’s when I realized why it’s so hard for South Asian women to come forward as leaders in the political arena.

Not only do the people we love mock us for not being soft, sweet girls, but they are also straight-up harboring homophobic, sexist and racist tendencies within them. Look, we all know that mocking women is a mechanism for protecting a patriarchal system. It is two-fold here because of our culture. While it isn’t easy being outspoken as a woman, it is 10 times harder as a South Asian woman.

Reach out to any South Asian woman you know in Leftist politics. Chances are that they exist right outside your periphery. Mentors can link you to volunteering in radical spaces, meetings, conferences, internships, and even careers. The women who have come before me are my biggest blessings and anchors.

2. Take space for yourself

It is hard to be a South Asian who is an open Leftist. So many spaces, like universities, will not hold space for you. But that doesn’t mean you can’t do it yourself. And by this, I mean more than a bubble bath and a face mask, okay? You are valid and real and your voice matters.

3. Try not to co-opt into other spaces just because you don’t have your own (yet)

Being in intersectional feminist spaces is wonderful but just because you haven’t had interactions with desi feminists doesn’t make it okay to co-opt into Black feminist spaces. There is so much we can learn from one another, but their history is not your history. This was a hard one for me to learn where I grew up.

4. Seek out like-minded folks. It might be hard, but they’re there

We’re usually hiding out in policy programs, or sociology.

This. If your hometown or your college town doesn’t have a big desi Leftist group—leave. At least for a little while. Go to New York, L.A., or Chicago. Check out the amazing community action they’ve built around Leftist ideology. Delve into their practices and get to know the people. Not only will this give you ideas for your hometown that you love so much, but you’ll also feel so much less stressed about your politics.

For some time, I alienated myself completely from South Asian mainstream groups. But I never stayed entirely quiet. Through what felt like blindly reaching through crowds, I found one or two other South Asians who also felt isolated by mainstream South Asian groups. So, I set out with those few friends to do what seemed to be the impossible: creating a collective South Asian Leftist political group. I am so excited to see where we go and what we learn together.

Lalitha Pamidigantam is a professional Policy Analyst. In her work, she fights for oppressed people through institutional and systems change. Outside of work, Lalitha enjoys reading Leftist literature, eating Chilimac, and buying all the earrings a girl can get her hands on from local and minority owned businesses.