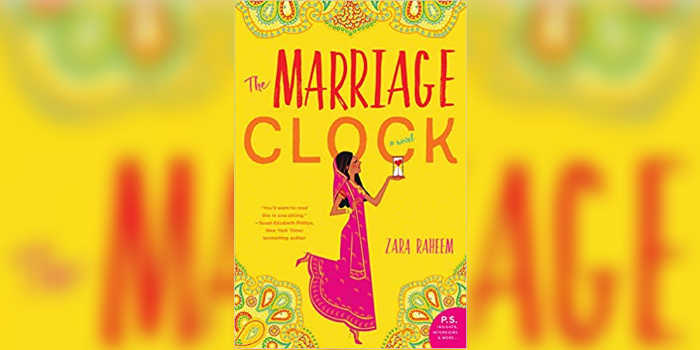 Leila, it’s good to have expectations. There’s nothing wrong with that. All I’m saying is life is not a movie and not everyone experiences that moment you’re so hopelessly waiting for. The longer you hold onto these notions of perfection, the more disappointed you’re going to feel when you don’t find it.” – Annie

Some of the conversations in this book made my blood boil because they are just too true. “The Marriage Clock” by Zara Raheem offers a glimpse into what the conversation about marriage is like within South Asian families.

Leila is a late-20 something woman who happens to be single. She’s not lonely and single or unhappy and single, she’s actually content with her status but still believes that one day she’ll find “the one.” When her parents decide she’s too old to be unmarried they start to pressure her to find someone immediately, which leaves her with a whirlwind of emotions and lots of questions about what constitutes love and happiness.

Traditionally, in South Asian cultures and across the diaspora, people enter into marriage as an arrangement. Bollywood movies show us romance and love at first sight but reality can be been quite the opposite. It’s usually a matter of parents getting together and figuring out if their families are a right fit, and less about if the couple is the right fit. The novel makes a distinction in love in this context, saying that love comes after getting to know each other in marriage, instead of before.

Leila, like many, would prefer the latter. She finds herself struggling against the traditional view of love because it’s not how she envisioned her life. She expected to have a choice in the matter.

Even though she gives in to her parent’s wishes, she does it with the caveat that she gets to search (for an allotted time span) on her own. They interject, of course, and no matter how many times she tries to make them understand that an arranged marriage is not what she wants they simply don’t understand. At one point her mother flat out says that Leila not being married was affecting her life because people talk. People.

Our culture has this giant paradox that I simply cannot grasp. We’re close, family-oriented, love and care about each other, but we judge others. We punch below the belt. We torture ourselves and our loved ones for the sake of other people and it’s time to end that behavior.

Without giving away the ending of the book, I can say that Leila feels the same way. She goes on several dates, gets her heartbroken, and questions her ideals on love, marriage and happiness.

Of course, I highly recommend “The Marriage Clock,” but I’d suggest you read it with perspective. I was quick to judge her parents for being so unaware of their daughter’s feelings and quick to judge Leila for not being realistic. I let some of my own misconceptions of family, the marriage conversation, dating, romance, and, yes, love cloud some of my thoughts. It was only in pushing through, reading to the end, and mulling over my thoughts that I remembered happiness and love will always and forever be what you define it to be — don’t let anyone steal that from you.