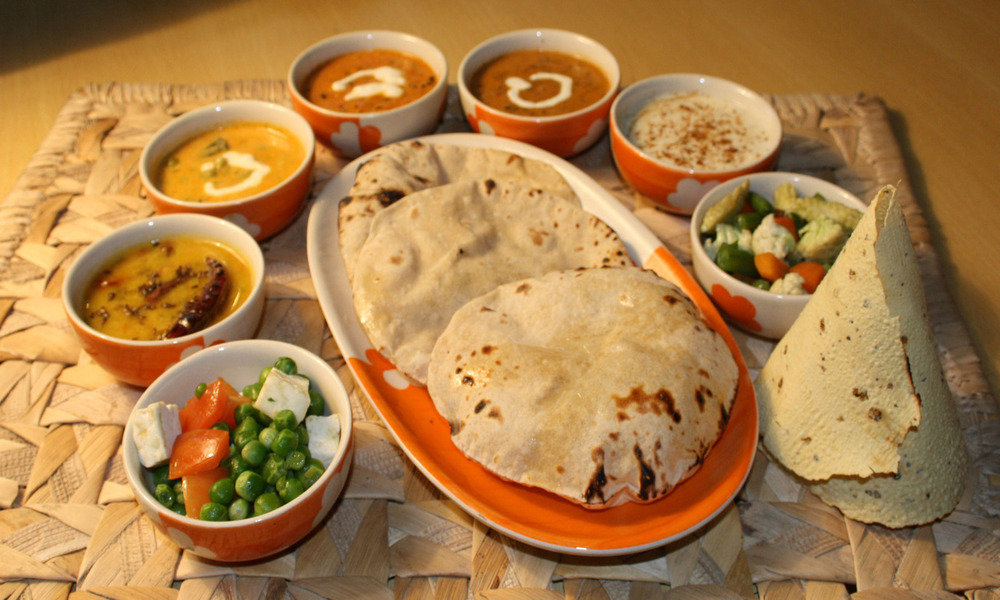 “The way to anyone’s heart is through their stomach,” my mother would joke, as she spent hours in the kitchen curating the perfect mixture of garam masala spiced vegetables, curried lentils, pickled mangoes and flawlessly round roti to feed our humble family of four. I would admiringly watch her repeat her perfected roti-making method. “Take notes,” she’d advise, “You’ll need it one day.”

As a child, I would prop onto our kitchen stool eagerly watching my mom. First, she laboriously kneads the dough, a combination of wheat flour, water and a pinch of salt and then divides it into small balls before flattening with an aged rolling pin. She slaps the raw pancake on a hot griddle until it’s cooked into a flat Indian bread. Her final touch is to brush a small amount of clarified butter or ghee onto the finished masterpieces. The fresh stack of roti would sit on the kitchen stove daily until it was time to eat. I repeatedly ask her to assist, but each time she would grin and say, “no need to rush, you’ll be doing this in a few years.” Frowning, I would retreat to my room with an audible sigh.

Growing up in a South-Asian family in Queens, New York, my mom proudly demonstrated to me and my younger brother how our food embodies authenticity and cultural linkage. She would craft different meals, all versions of something she saw on ZeeTV or collected from a relative abroad. She showed us how roti was a vehicle, not only to collect hearty helpings of vegetables and beans to support our vegetarian diet, but a staple of our heritage. Lovingly called the “poor man’s bread,” my mother would share tales that included competing for theories on its origination. Some suggest that roti was born in Persia and made from a thicker white flour known as maida, while others argue that it came from East Africa and later found its home in India. Ancient texts also reference that the Mughal emperor Akbar fancied it; a fact my mother would cite when I refused to eat a meal, joking that if the meal was fit for a King, surely it can suffice for this inner-city native.

I never appreciated the laborious efforts my mother expended when it came to food. Each day she would prepare our lunch and dinner before traveling an hour and a half uptown to make her night shift at Mount Sinai Hospital. Back after a 10-hour workday, she would slip into a brief slumber only to repeat her process the next morning. Somehow, she would be awake before our morning alarms blared, the aroma of warm breakfast filling our tiny apartment, reminding us how in spite of our humble lives, we were fortunate to have a meal on our tables unlike those back home in India.

As a child, however, I would eat my lunch in the bathroom (or sometimes even throw it away) due to the paralyzing ridicule that my “smelly” curries may induce among my peers at school. In the wake of the 9/11 terrorist attacks and the growing racial tensions against Muslims and South Asians, I did my best to hide my Indian culture, often masking myself with foundation that was three shades too light, furiously practicing my English to get rid of remnants of my Indian accent and refusing to discuss anything about my identity. The terror of being ostracized for my cultural and racial backgrounds was debilitating, and as a middle-school child forced to witness the aftermath of terrorism in my beloved New York City, I was too young to understand the implications of my actions. Still, high school was no different. I attended the prestigious Bronx High School of Science, an oasis for Asian American students, yet the political climate remained too sensitive to explore my Indian-American identity or delve into my Hindu religion. It was almost easier, not to mention safer, to be culturally invisible to avoid being a victim of bigotry. As a result, I traded plates of buttery roti and chili paneer for bubble tea and mac & cheese, an exchange which I strongly believed would make me more “American” and less “Indian.”

The older I became, the more I realized I was running away from my identity at the expense of my mother’s health. The exhaustion and fatigue from working tirelessly to make ends meet were painted on her face, yet she remained resilient, concerned only that our bellies were full and our minds inspired. Ironically, it wasn’t until I attended a homogeneous university in Chestnut Hill, Massachusetts that I finally accepted my cultural background and emerged on a self-guided crusade to tear down misconceptions.

I recall sitting in a freshman-year writing seminar during the first week of my fall semester. The assignment was to write a one-page narrative on the significance of our names. Incidentally, my name means “prayer” in my native language Gujarati. When it was my turn to present my prose, I started by explaining that I was born in a rural part of Gujarat, India and emigrated with my mother at the age of three to join my father in chasing the intangible “American Dream.” I discussed how prayer and worship, coincidentally the reason I was named “Pooja” in the first place, was a beacon of hope that my parents shared when they first settled in unfamiliar territory. As I read out loud, I heard sarcastic snickers from the side of the room, a familiar sound that I had become immune to throughout my childhood. Instead of ignoring these comments like I grew accustomed to, I took that moment as a teaching opportunity and proudly discussed the trials and tribulations I faced as an Indian-American and the ways in which my family, especially my mother, taught us perseverance. From that point on and through most of my college career, I was on a quest to assimilate my Indian roots with my American upbringing and to be comfortable with the outcome of that cultural marriage.

As my mother had accurately pointed out, I relearned how food not only is a defining aspect of one’s culture but is also a unifying cross-cultural experience. Over those four years, my roommates and I became amateur chefs, attempting various recipes that lived in our respective kitchens, trying to replicate the teachings of our own mothers. During each phone conversation, my mother would laugh at my attempted cooking, her voice gleaming with pride at my novice cooking skills. She would end our conversations joking, “when you’re back in New York, you will have to feed me.” I would reply enthusiastically, knowing in my gut that her cooking is unmatched.

Shortly after leaving Boston, I started law school two and a half hours away from home, when my mom was diagnosed with severe uterine fibroids. She called me just as I was walking out of my contracts class casually informing me that there was a medical explanation for the intense discomfort she endured for the past several years. The strong-willed woman that she is, she tried her best to fight off the debilitating pelvic pain, depending instead on medication and hormonal therapy. When she was defeated by all temporary options, there was only one treatment left: total permanent hysterectomy.

The morning of her surgery was a crisp fall day. The sun was shining gallantly over my head, yet somehow I felt panicked and cold. I scurried out of my law school dorm in Upstate New York to make the journey to the hospital in Flushing. I had just finished my Criminal Law midterm that morning, but my eyes stung from lack of sleep. I had stayed up for the better part of the night not only to study, but to therapeutically prepare a very familiar meal: yellow lentil dal, mixed cauliflower and green beans, sweet and spicy yogurt, and our household staple—roti. Just like I saw my mom do it.

The elevator opened up to the floor where my mom’s surgery was to be held. I took a sharp left and found my way to a sterile, beige-colored door that read in clear bold letters “Shah, P. 11:30 AM.” Choking back tears as I imagined the invasive procedure my mom was about to undergo, I entered her room and presented her with the meal I had anxiously prepared. She looked up at me, smiled after she ate her first bite and proudly said, “I taught you well.”

Pooja Shah was proudly raised in Queens and currently lives in the emerging Hudson Yards area of Manhattan. During the day, she is an attorney at a law firm and at night, a freelance writer focusing on issues related to gender equality and social justice. You can find her hunting down all the best wine bars in NYC, speeding through the latest mystery/thriller reads, or binge-watching Sex & the City reruns.