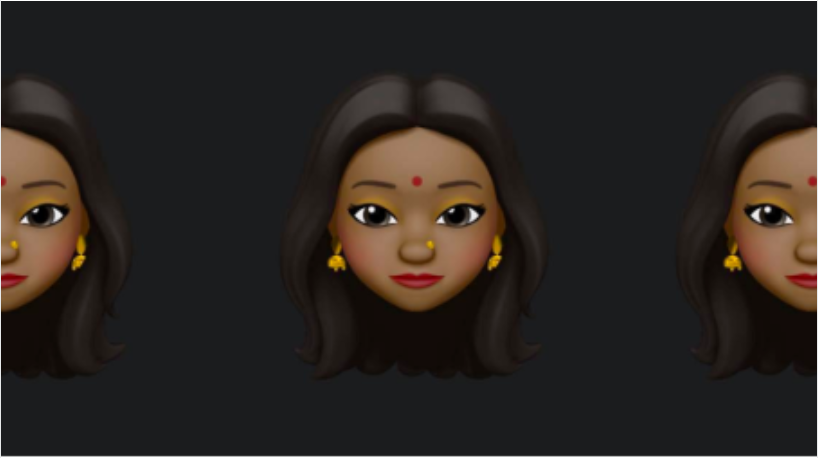 Apple’s recently released iOS update allows users to create their very own Memoji stickers. For those of you who aren’t familiar with the term, Memojis are basically Apple’s version of something akin to Bitmoji stickers. For Memojis, you create your own personalized animated avatar, where you pick your skin color, hairstyle, facial features, accessories, and more. Then once you’re done, you can send different stickers of your Memoji showing emotion or different expressions in your iMessage chats, the same way you would send a regular emoji.

This all sounds pretty standard, right? Wait till I delve into what I discovered as I was creating my Memoji.

I was in the process of updating my phone, literally just last night. Once the update was complete, I got on my iPhone keyboard and started setting up my Memoji.

Everything looked pretty standard in the beginning. I mean we’ve all seen avatar builders that allow you to change skin tone, eye color, and hairstyle. Most avatar apps now have a hairstyle that is inclusive and allow for different ethnic groups to create avatars that hold true to them, which is awesome. At this point, this isn’t much of a surprise for me.

[Read More: A Love Lost & Gained: Healing From a Breakup]

But then I stumbled upon a feature called “Forehead Mark.” It took me a while to dissect what exactly this was. And that’s when it hit me. These were bindhis, and you had the option to give yourself bindhis of whatever color you wanted.

I thought this was pretty legit and felt amused. I gave myself a little red bindhi and then moved on to creating the rest of my avatar. A few features later, I stumbled upon yet another surprise.  If you look closely, one of the earring options is clearly jhumkis! This was pretty exciting for me personally. Usually, when creating a Bitmoji or another personalized avatar, the earring options are limited to the typical Western designs you would see at most retailers at the mall. That’s why it was exciting to me that I could customize my avatar with an earring option that’s representative of my culture and something of which not many people outside of the desi community are usually aware. And this was the final result!  Avatar creation was already becoming increasingly inclusive of diverse cultures, ethnic groups, and religions. Now it’s just gotten even more awesome and authentic for us brown girls that we can rock bindhis and jhumkis in our virtual versions of ourselves if we’re feeling a little desi that day.