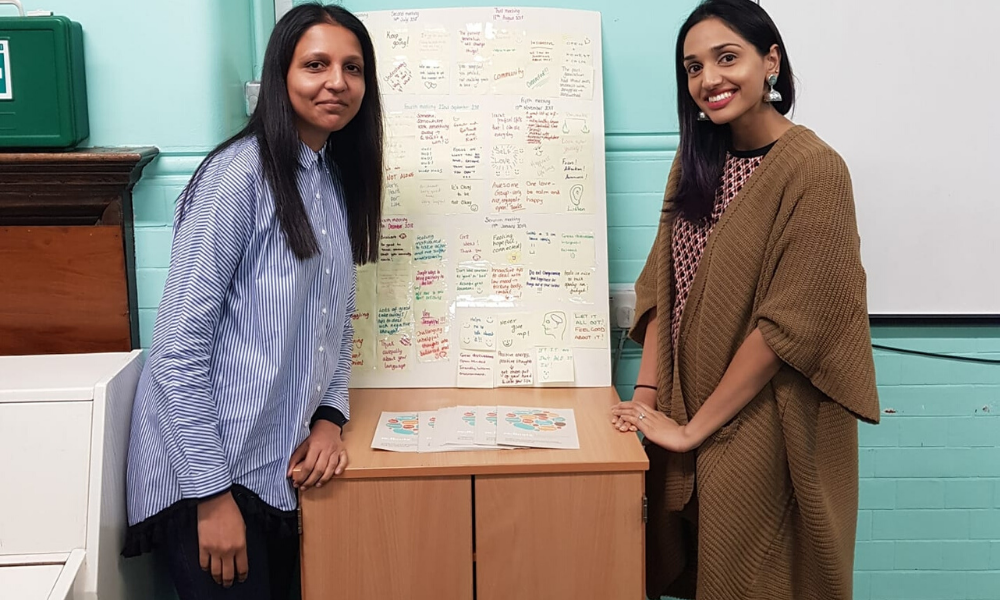 Mental health even today is hugely stigmatised in South Asian communities. Fear of ostracisation, pre-defined gender roles, and familial responsibility are some of the root causes amongst others, but it is not enough to simply place the blame on cultural norms. South Asian communities are not getting the tailored mental health support that they need in order to tackle some of the intersectional and cultural problems they face — which is where support groups like ReRoute come in.

Sonam Patel started ReRoute, a London-based support group for 18 to 35-year olds, in June 2018, and she was soon joined by Jennal Amin in December last year. They started the initiative after finding no support mechanisms in the local area for mental health, as well as no tailored resources specifically for South Asians. The support groups that did exist were predominantly white. The cultural barriers, both between peers and between mental health professionals and support seekers, were hindering the local South Asian community from engaging.

Body image. Finances. Misogyny. Floral healing. These were the topics we had set for our first women's wellbeing meeting on Saturday. All themes have overlaps but one key message came above everything else… Accepting yourself = Power Helping others to accept themselves = Empower It all begins with you! #southasianmentalhealth #womenempowerment #feminism #mentalhealthawareness #mentalhealthmatters #wellbeing #peersupport #harrowmentalhealth

South Asian communities in the diaspora are beginning to open up about some of the mental health challenges that impact them specifically — risks of stigmatisation and ostracisation from communities, arranged or forced marriages, family responsibilities, linguistic and social barriers, and sexism that is often ingrained in cultural practice. Organisations like ReRoute are often facilitating these conversations, highlighting the need for culturally tailored mental health support.

Brown Girl Magazine spoke to Amin, who not only co-runs ReRoute with Patel but has also started Mental Wealth, a group aimed specifically at South Asian adults between 35 and 60 years old. Both groups are soon to be adopted under the Rethink umbrella, which will allow them to further formalise their offering to the local community.

We talk about the cultural impacts of trying to open up to your friends and family, of fear of judgement and shame, of having a lack of confidence, of suicide and self-harm, and also about how we can bring these open and authentic conversations outside of the group.

The power of the environment that the support group creates is incredible and comes largely from the attendees themselves. Patel and Amin ensure that they involve the attendees in the management and operational elements as well, such that they feel ownership of the group and someday become self-sufficient. Amin says,

You can feel the tension in the room at the beginning of the two-hour meeting. It takes just one person to start sharing, and the energy just shifts. Seeing other people sharing their stories shows them that somebody else has also gone through what they are going through. They then begin to build relationships outside the group, and that peer support is basically what the group is about. Sonam and I are just facilitators.

Patel and Amin not only facilitate verbal conversations between attendees at the support group, but they also use creative visual aids to accompany their meetings, such that attendees can find alternative means of expression. Sharpies and Post-it Notes are at the ready to help capture thoughts, feelings, and feedback on a Visual Minutes Board throughout the session.

Some snippets of the Board are on the group’s Instagram page, with some beautiful words that demonstrate just how impactful ReRoute has become for the local community.

Some of the thoughtful comments made at our last meeting last Saturday where ReRoute and Mental Wealth came together to discuss mental health in South Asian communities and how it is presented in literature/the media? We love seeing positive feedback from our members on how coming to the group helps them in their mental health journeys and are forever grateful to be able to play a meaningful part in them! Watch this space for details of our September meeting and we hope the rest of August is kind to you all ? #peersupport #southasianmentalhealth #mentalhealthawareness #harrowsupportgroups

Amin mentions the somewhat surprising struggle that the group has in attracting younger people, despite generally wider awareness amidst adolescent audiences of mental health and wellbeing. There is also the rather unsurprising struggle the group faces when it comes to attracting men. With plans being put in place for all-male support groups, Patel and Amin are well on their way to tackling these obstacles as well.

The end goal is that Sonam and I are not the facilitators, but that the members are leading the group themselves. And beyond that, that South Asians are just talking about mental health in normal conversations rather than in support groups.