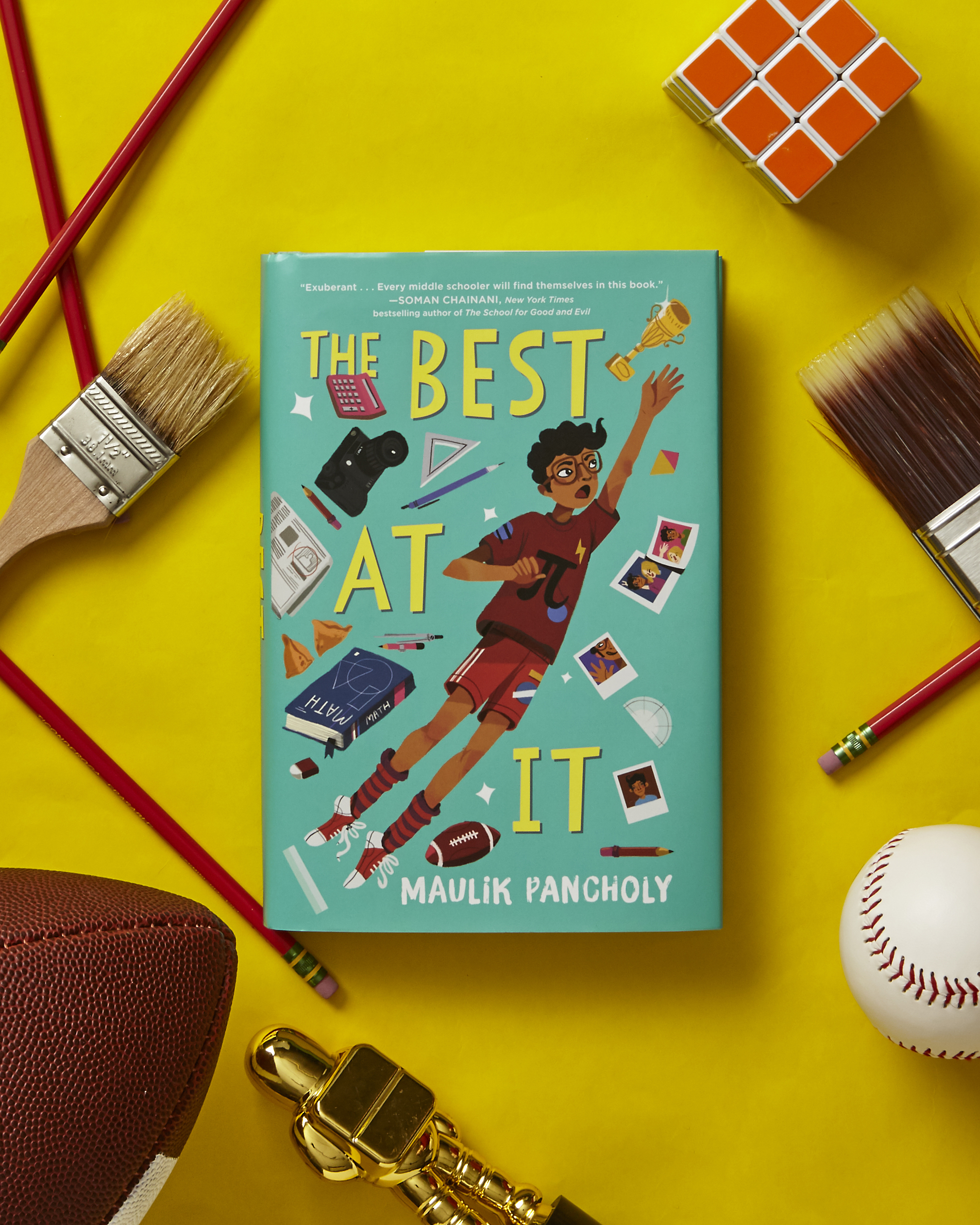 We all know him as Baljeet from “Phineas and Ferb,” or Jonathan from “30 Rock.” But Maulik Pancholy is so much more than an actor. Although his on-screen characters have made a place in our hearts, Maulik has found one more way to share his identity with the world with new book, “The Best At It.” We had the pleasure of hearing first hand from Maulik about his newest accomplishment and of course we got the inside scoop for you all that are fans just like us!

[Read Related: Book Review: Maulik Pancholy’s ‘The Best At It’ is Heartfelt, Honest and Relatable]

Maulik describes “The Best at It” as a story that follows the journey of twelve year old Rahul, a typical Indian American boy who is beginning to realize that he may be gay. With this realization comes anxiety and bullying at school regarding his cultural and sexual identity. One night, his grandfather tells him a story during a night of Bollywood movies and bonding. Rahul acquires one major takeaway, if he’s the best at just ONE thing, all his problems will be gone. But he’s caught in two major problems: he doesn’t know what to even be the best at, and he’s terrified of failure. However, with the help of his best friend Chelsea, he sets off on a journey to be “The Best at It.”

My first @bookexpo ever….done. What a day – panels and signings and meeting the most passionate booksellers. So grateful to everyone who showed so much love for THE BEST AT IT. #bookexpo #middlegradebooks #bookstagram #writersofinstagram

Now of course, gender identity and sexuality are subjects that are still extremely taboo in South Asian society and while more and more light is being shed on it as time goes on, we wanted to know Maulik’s take on how he thinks his book would bring more understanding to generations that still look down on these subjects. Maulik said,

I hope that readers of all generations will fall in love with Rahul, my lead character, and that the book offers a window into his experience that fosters understanding.

In a lot of novels with young lead characters, the families or communities around the protagonist are absent. The opposite is true in ‘The Best at It’. While Rahul very much has to chart his own path, he also has loving parents, a grandfather who is one of his closest friends, and a large, complicated and nuanced South Asian community of aunties and uncles in which he ultimately finds a home.

This was important to me. I wanted to model what I think is a real possibility: that our families can support us and our communities can rally behind us.

As a writer myself, I couldn’t help but wonder if Maulik had drawn inspiration from his own journey. It turns out that much of Rahul is also in Maulik himself. He talked about how he was a middle schooler was trying to run from himself, who truly just wanted to fit in as a normal boy, and was struggling to find comfort in who he was.

Visited HarperCollins today to sign some final copies of my book! THEY’RE HERE! And they look so good I can’t believe it. Come meet me on tour and get your very own signed copy. Additional tour dates and more info at www.maulikpancholy.com (link in bio!)

He also mentions a very important detail, that when he was growing up there were no characters who looked like him in books, TV shows or movies, which I personally related to because I struggled to find that same connection with who and what I saw in the media around me as a child and teenager.

For Maulik, there were no brown characters, and even fewer gay characters and the message that conveyed was pretty simple. You don’t matter. Maulik said,

So, I wrote The Best at It for two reasons: to offer representation to kids who never see themselves in books, and to speak to readers who struggle with feeling different. What’s been amazing is that the specificity of Rahul’s story has actually given the book a universal appeal. It’s been exciting to see how many people–of varying backgrounds–are connecting with it.

Being South Asian often means growing up in an environment that is strict and often secretive, and so we wanted to know what that journey of coming out was from when he began to now.

Maulik made a very important distinction for us. He said that the default assumption is that people are straight, meaning those that identify as being LGBTQ constantly have to come out time and time again. This was certainly eye-opening to know for me, and a helpful piece of advice I hope to keep in mind talking to those that do identify as LGBTQ.

While Maulik is in a place where he says that he feels much more comfortable and secure being his authentic self, there’s still work to be done in society. Maulik said,

Growing up, I had no ‘out’ role models. As a kid, I didn’t know a single person that was openly gay. So, in my experience secrecy around LGBTQ issues extended far beyond just the South Asian community. While things have progressed a great deal since I was a child, I think we still have a far way to go. I hope books like ‘The Best at It’ offer ways to remove shame and secrecy.

So that being said, I’m sure so many of you are curious to know what is next for Maulik considering he’s got acting, writing, and activism under his belt. Well, you’ll be happy to know there’s quite a lot happening in his world! Maulik said,

I’m currently in discussions to turn The Best at It into a film or tv series, which I’m very excited about. And I’ll be back on Broadway in December in a new play called Grand Horizons. So, the journey feels very full and pretty thrilling at the moment.

Many youths struggle with their sexuality and gender identity, however I think Maulik’s parting advice can be applied to anyone struggling through any hardship in life.

“Live your truth. If you’re struggling, know that there is help. But always be yourself.”

Aaah! Some great news! THE BEST AT IT has been named a 2019 Junior Library Guild Selection! Libraries were magical places for me as a kid. They still are. So it means the world that with this honor, @jrlibraryguild will help my book make its way into schools and public libraries and into the hands of young readers everywhere. Thank you, JLG! #juniorlibraryguild #juniorlibraryguildselection #middlegradebooks #bookstagram #writersofinstagram

What is even more amazing is that Pancholy had the privilege of serving on President Obama’s Advisory Commission on Asian Americans and Pacific Islanders. During his time with the administration, he helped co-found an anti-bullying campaign that he is still actively chairing, which is called Act to Change. The message of the campaign is one that Maulik clearly lives his life by, to celebrate diversity. So, he insists that if there are any kids out there looking for support, by all means, check out the resources at acttochange.org.