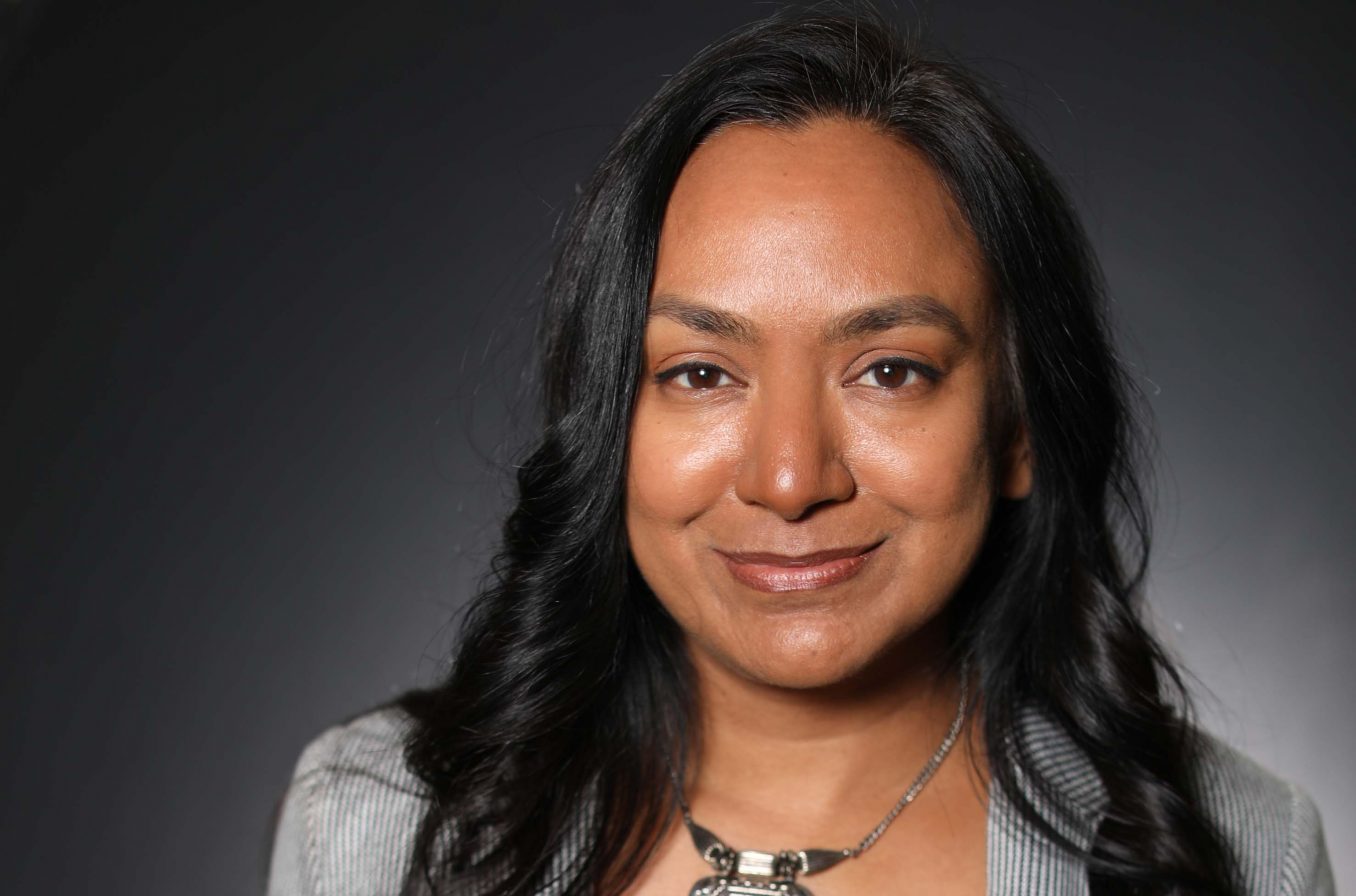 My advice to young desis, or folks looking for a career change, is to be specific about what you want out of a career in entertainment, and own it. Stay focused on why you are doing this, and strategize accordingly. — Reena Dutt

Director and producer Reena Dutt provides an insightful interview loaded with Hollywood career tips. She shares her journey on working in the Los Angelos theatre scene. Reena is a living example that you can please your desi parents while pursuing your creative ambitions.

“I considered majoring in theatre, but that is where my parents drew the line, for practical reasons.”

You’re a first-generation East-Indian American director in New York City and Hollywood. What made you want to get into this line of work? And did you have a career before films like so many creative desis?

I always enjoyed performing as a kid! My parents graciously supported it and took me for all sorts of lessons: ice skating, ballet and theatre. My parents are such a gift to me.

The reason my parents probably supported my creative ambitions is because I was a good student and well-rounded individual. Had I been a poor student, their perspective may have been different. I considered majoring in theatre in college, but that is where my parents drew the line. I entered college as an Accounting major, and thankfully fell out of interest rather quickly.

The reason my parents probably supported my creative ambitions is because I was a good student and well-rounded individual. Had I been a poor student, their perspective may have been different.

Practicality Intersects with “The Dream”

I took a class on Japanese film making for my international finance track, which was the point of no return. The beauty of visuals in Japanese film blew my mind. I changed my degree to Media Arts (Film, Television, Radio). This was the closest degree I could get that made my father feel secure in my post-graduation employment opportunities. I auditioned for all the graduate student plays, kept performing through college, and ultimately moved to Los Angeles to pursue an acting career.

I changed my degree to Media Arts (Film, Television, Radio) – closest degree I could get that would make my father believe getting a job after graduation would be easier. In the meantime, I auditioned for all the graduate student plays, kept performing through college, and ultimately moved to Los Angeles to pursue an acting career.

I worked odd jobs to support myself and did theatre at night. Ultimately, I went to New York to study acting in a 2-year program, filled my theatre bucket and returned to Los Angeles where my career transitioned from actor to producer and most recently director.

You’ve directed and produced for film and television. Tell us about a recent project.

My most recent filmed project as a director was a music and dance film called “Too Many Bodies.” The Parkland Massacre inspired me to create a film that removes the biases of words and allows people to have difficult conversations regarding gun reform. Gun reform has become a conversation starter at festivals across the country. The piece was ultimately seen by activist and actress Alyssa Milano (“Melrose Place”, “Charmed”) who promoted it through her company NoRA (No Rifles Association).

My most recent directing work has been seen on stage. A World War II play full of the mystique of Iceland fables, called “Defenders” by Cailin Harrison. After a four-week run, we closed in early December (2019) to a great response.

You’re a member of the Lincoln Center Directors Lab in NYC and Directors Lab West in L.A. How has your experience been with these two organizations and what is your role?

Lincoln Center Directors Lab has been around for 25 years. The in-depth application process includes getting a feel for the director’s thoughts, vision and goals in the film industry through essay questions. Once you’re accepted, you surround yourself for three weeks with like-minded directors from all over the world. The lab allowed me to build friendships and allies with people who become my future think-tank of colleagues.

Directors Lab West worked in a similar process in terms of how one is accepted. The focus was more on panel discussions with local companies to learn the methods of those organizations.

Both labs create a community that expands beyond our immediate cities and brings colleagues together. It’s an invaluable way to find allies in what can be a very lonely occupation.

If you had one piece of advice to give a desi kid on breaking into the theatre/film industry what would it be?

My advice to young desis, or folks looking for a career change, is to be specific about what you want out of a career in entertainment, and own it. Stay focused on why you are doing this, and strategize accordingly. Always remember, the roles and jobs you accept, are the stories that will be seen worldwide, and will influence how people see your own community. You don’t have to say “yes” to everything. Perhaps, you will want to. Know what you say “yes” to is enabling that very content to be seen by hundreds and thousands of people that may be influenced to learn about the South Asian diaspora from your choices.

Always remember, the roles and jobs you accept, are the stories that will be seen worldwide, and will influence how people see your own community.

Is it a good time for South Asians females to enter the industry?

I think it’s a great time for anyone to enter the industry. Technology is easy to access, collaborators are a Google Hangout away, information for how to do anything is at our fingertips. You no longer need to be in LA or NYC in order to find success.

With online platforms, you can: Create whatever stories you want; be strong in your marketing tactics; find an audience that is yearning for your material.

The key is to know that any time is a good time to enter the industry, if it’s something you really want to do, and every generation has a new set of hurdles and accomplishments to achieve.

A Responsibility: Creating Conscience On and Off-Screen

Your bio states you value creating conscience on and off-screen. What does this mean to you?

“Create with a Conscience” means to proceed with awareness and empathy. It’s far too often that we’ve established a value system based on a hierarchy on sets. The director is the leader, the actors are Gods, and the assistants are the help. The reality is each of these moving parts, and everyone in between, is invaluable in making a project happen. If any part of the team is not healthy, safe, and feeling valued, the project can easily fall apart. When I say to create with a conscience, I mean to be respectful of the needs of everyone who has joined your team.

This goes for storytelling as well. As an example, if I’m going to tell a story about gun violence, I’m going to pay my respects to survivors or families who have lost loved ones. Whether it’s a trigger warning before it begins, or resources to help others in my marketing and publicity materials, do something to show you care about the subjects you discuss.

The next play Reena Dutt is working on is written by the esteemed playwright, Madhuri Shekar, called “Antigone, Presented by the Girls of Saint Catherine’s” and opens March 2020 in Los Angeles (produced for Sacred Fools by Jax Ball). It is a pre #MeToo era story set in the 1990s centered around girls of a Catholic school faced with making a choice to speak out against a teacher who betrays them in unforgivable ways.

Reena Dutt’s theater work has been seen in New York City, Los Angeles and San Francisco. She has directed at A Noise Within in conjunction with East West Players (staged reading of Snow in Midsummer by Frances Ya-Chu Cowhig), the Road Theatre (staged reading of Kissing Che by Augusto Federico Amador), and Sacred Fools (staged reading of Monkey Love by Madhuri Shekar). Prior to that she was an assistant director for Jo Bonney at The Geffen Playhouse on Jose Rivera’s world premiere of The Untranslatable Secrets of Nikki Corona, and Dramaleague’s Jennifer Chang on the Fountain Theatre’s Los Angeles premiere of Hannah and the Dread Gazebo. Dutt also directs for film and television and has an extensive producing history. Dutt is a member of the Lincoln Center Directors’ Lab (New York City), Directors Lab West (Los Angeles), and a Semi-Finalist for Dramaleague’s Hangar Directing Fellowship. She is a graduate of the Media Arts program at the University of Arizona, Tucson, and the acting program at William Esper Studio, New York. To connect with Reena visit wwww.reenadutt.com