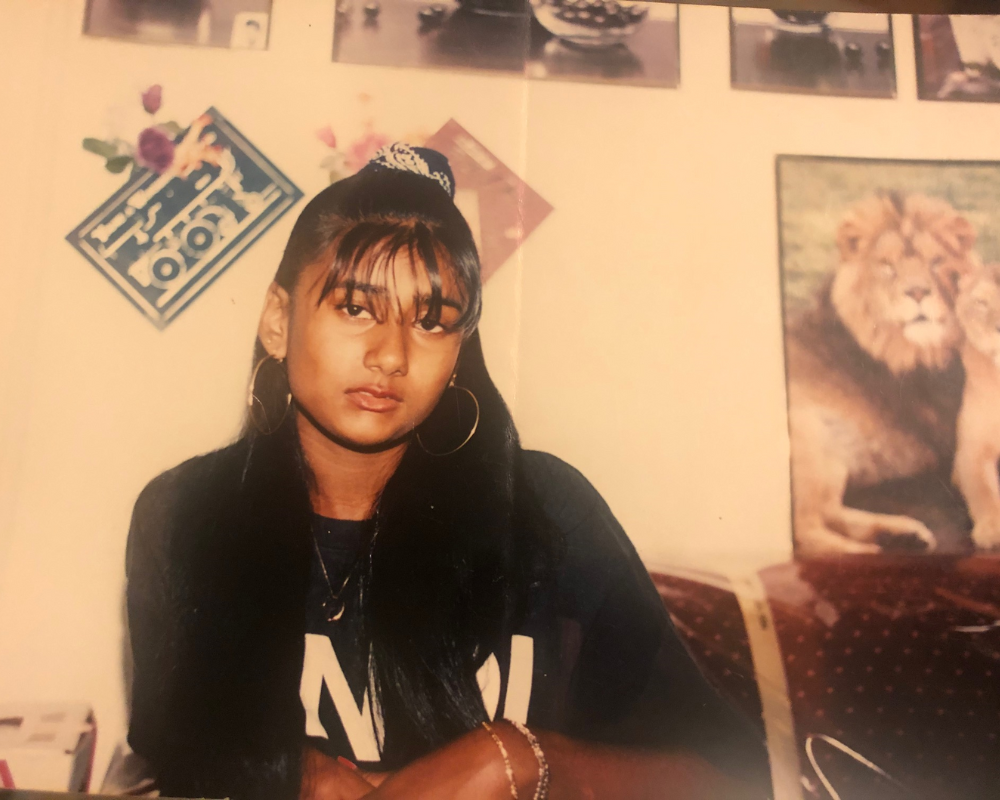 I got into a fight with a Haitian girl right before I left Robert Van Wyck Junior High School (JHS 217) in 1993. The hair pulling, wrestling, shrieking, kicking, punching started on 144th street leading up to the school and 87th Road, across from the deli where I bought 25-cent fruit colored drinks—and ended with me bursting onto Hillside Avenue disheveled and in a panic. To this day I remember being surrounded by a gang of kids shouting “Punch she!” “Grab the hair!” and “Kick she between she leg!” Many of the faces were my opponents’ friends, a few my own friends, and the rest curious, sweaty faces wanting to see a fight for the first time.

My school’s reputation was legendary in the ’90s. The building itself was massive, with about a thousand kids from Briarwood, Jamaica, Union Turnpike and Elmhurst. During the two minute hall-bell, 217’s hallways surged with immigrants from India, Pakistan, Haiti, Ecuador, Guyana, Trinidad, Nigeria, Yemen, Greece, China, Columbia and second and third-generation Irish and Italian White kids trying to get around each other, up and downstairs, in and out of doorways. Fighting each other was a thing and the fear of getting jumped by someone’s posse was something most of us carried around like the Jansport’s on our backs. Real or not, whispering about fights happened too often:

Yo! Kenny’s getting jumped by Kareem’s people after school!

Yo, I heard Jennifer’s gonna wreck that girl in her class!

This time it was me. I was 13 years old and acting brave. Bravado was better than the oppressiveness of helplessness, fear, and acquiescence that had shaped most of my young immigrant life up until then. By the eighth grade, I’d given up the slim-fit pants and ballet-looking slippers with the bow on top, for bad-ass, orange high-top Filas and baggy jeans. I’d also tossed out my scrunchies and started wrapping my long ponytail in a bandana. To my mother’s disappointment, I’d also given up the flute. It took me 20 years to realize it, but I’d wanted to play the drums. I never really wanted to be front row with a flute in my hand in Mr. Bobe’s seventh-grade music class. I wanted to clang away and follow the beat of my emerging teen angst like the boys did in class.

I was just too damn scared to ask for it (or anything) then.

My world shifted when I met some older teen friends the summer before eighth grade. It was the first time I saw swagger, fearlessness, and coolness in real life. My new friends smoked cigarettes, skipped school sometimes, cursed when they talked, had romantic interests, and pushed limits with their parents and with each other. Until then my parents had known me as a shy, curious brown-faced girl who liked to people-watch from afar, who does her homework on time, wins school awards and watches Nickelodeon in the evenings.

I followed all the rules, even placing a blanket on my father when he lay snoring on the floor of our one-bedroom apartment, drunk as hell, while my mother cried quietly.

Trinidad and all its memories of family and history was the place where my parents had come of age, married, and had children. Like so many other immigrant families they could have never known the true “sacrifice” that would come with the dazzle and allure of a “better life”: intergenerational conflict, assimilation/acculturation conflict, racism, role shifts, degradation, and self-hate.

And they could never have known what it would be like for that to be thrust upon me.

Anyway, I’d thought about wearing Vaseline on my face like people sometimes did to avoid getting scraped and scarred when Crystal, the Haitian girl, said she was going to fight me. But the whole damn thing happened so fast that I regretted ever saying anything to her in the auditorium in the first place.

It started on one of those days when piles of classes were herded into the auditorium as a way of managing the teacher-less classes when sunny weather meets fatigued teachers at urban schools, and by 2:00 p.m. everyone was sick of the hard seats and cacophony of voices. The deans of the school, with their massive key chains and walkie-talkies, had tried to help by dimming the lights and turning on the beaten-up floor fans but it was to no avail.

I no longer had an island accent as my father had warned against it:

Crystal had grown restless and started pacing back and forth at the back of the auditorium. Out of the sight of teachers, she started flipping the hair of some of the girls as she walked past the last row.

With Crystal approaching, the girl next to me started shaking in fear.

Her fright stirred something in me. I don’t remember what I said when Crystal approached us; I only remember the pause and then the look of anger on Crystal’s face and the rush of blood to mine after I had said the words to her.

Dis gyal have someting to say to me? Whaaat!

She asked rhetorically if not incredulously. Her island girls hollered back, looking for a fight then.

Fortunately, my class released before hers and I made it out of the building before she did that day.

I’d fantasized about my older friends rolling up to school and threatening her and her posse. The reality was different and terribly disappointing. Back at one of their apartments, I got the following advice:

Punch hard man, f–k her up!

I didn’t sleep well that night at all. In the bed next to mine, my parents slumbered, unaware of my predicament.

The next day the hallways were buzzing with talk about our fight. My friend Lisa, a Trinidadian girl, who I’d known since seventh grade, wasn’t sure what I should do. She and a few other classmates offered to walk down the hill with me but made no promises about jumping in. We’d walk out of the building together and journey down the hill, and that would have to suffice.

The walkout of the building snowballed into all kinds of random kids joining, shouting, laughing and running to catch up. I couldn’t tell who would be my allies.

I kept walking, my heart thumping inside my 90-pound frame. At any point a fight could break out—someone could grab my Jansport, throw me to the ground, punches, and kicks could happen. My feet moved, carrying me forward into the warm air, past the noise of cars and other boisterous 12 and 13-year-old bodies. The commotion was a jarring contrast to the peaceful blue sky above us. The same sky I was born under, on an island thousands of miles away from the bustling streets of Jamaica, Queens.

The crowd parted as Crystal and her girls weaved through, much like a serpent approaching its target.

She caught up and walked alongside me, smirking. I half-expected her to start it then but she didn’t.

We were a mob by the time we made it to the deli. The shopkeeper, no stranger to thieves and street fights, shouted at us so we moved to the other side of the street. There, a thick circle formed with Crystal and me inside.

Nothing happened for seconds.

For that moment I felt that we were both afraid.

Then the shouting started.

And then there were awkward punches, grunts, throwing of bodies. She reached for my hair and punched my tightly-wounded bandana.

We stumbled onto the ground and I was kicking while she tried to claw at my chest.

“Kick she in de p*ssy” a thick Haitian accent screamed. My back was to the ground and Crystal was lumbering above me.

The adrenaline pumped and I kicked her, and then we were scuffling again, flinging, grabbing, screaming while the outer circle squealed. I was fighting for my life when the storekeeper’s voice burst into my head.

He was screaming that he had called the cops.

The fight broke up instantly. People scattered in all directions and I ran faster than I had ever run in my life. I ran faster than I did the day my Trinidadian cousins and I tied t-shirts on our backs and bolted down the dirt road from our mother’s houses up to our grandfather’s house in Charlieville, Trinidad. We were seven years old and I was shouting:

Run! Keeping running! We can fly if we keep running!

Our capes fluttered on our backs but our feet never left the ground.

I burst onto Hillside Avenue and rounded it, never looking back. Behind me, the sounds of police sirens blared. I ran alongside Hillside Avenue, the street signs blurring, the air pushing from my lungs, blood coursing through my veins, my chest beating furiously as I darted across the avenue and onto 146th street. I was glad for the moving map of the neighborhood in my head.

I almost fell to the ground at the gate to my best friend’s apartment. In between gasps, I shouted for her. My head throbbed and my chest burned.

She opened the third-floor window and hung her body halfway out while sucking on a cigarette.

Did you kick her ass like I told you?

She asked coyly before tossing me the keys to her apartment.

It didn’t matter. I’d lived and I was free.

And then I started Thomas Edison High School.

Odessa Devi Despot, PsyD is a graduate of NYU and holds a doctoral degree in psychology from Yeshiva University. She is a staff psychologist at Rochester Institute of Technology and has a private practice in Victor, NY. Her research and writing revolve around identity development, multicultural and feminist issues, and relational psychotherapy. Odessa has contributed articles for the Caribbean Star newspaper, South Asian American Digital Archive (SAADA), Brown Girl Magazine and presented at various professional conferences. This story and Queens Girls, is part of a compilation of work from “Indian Girl”, a semi-autobiographical novel based on her life growing up in Queens, NY.

Indo-Caribbeans Share Their Journeys to the Creative Arts [PHOTO SERIES]