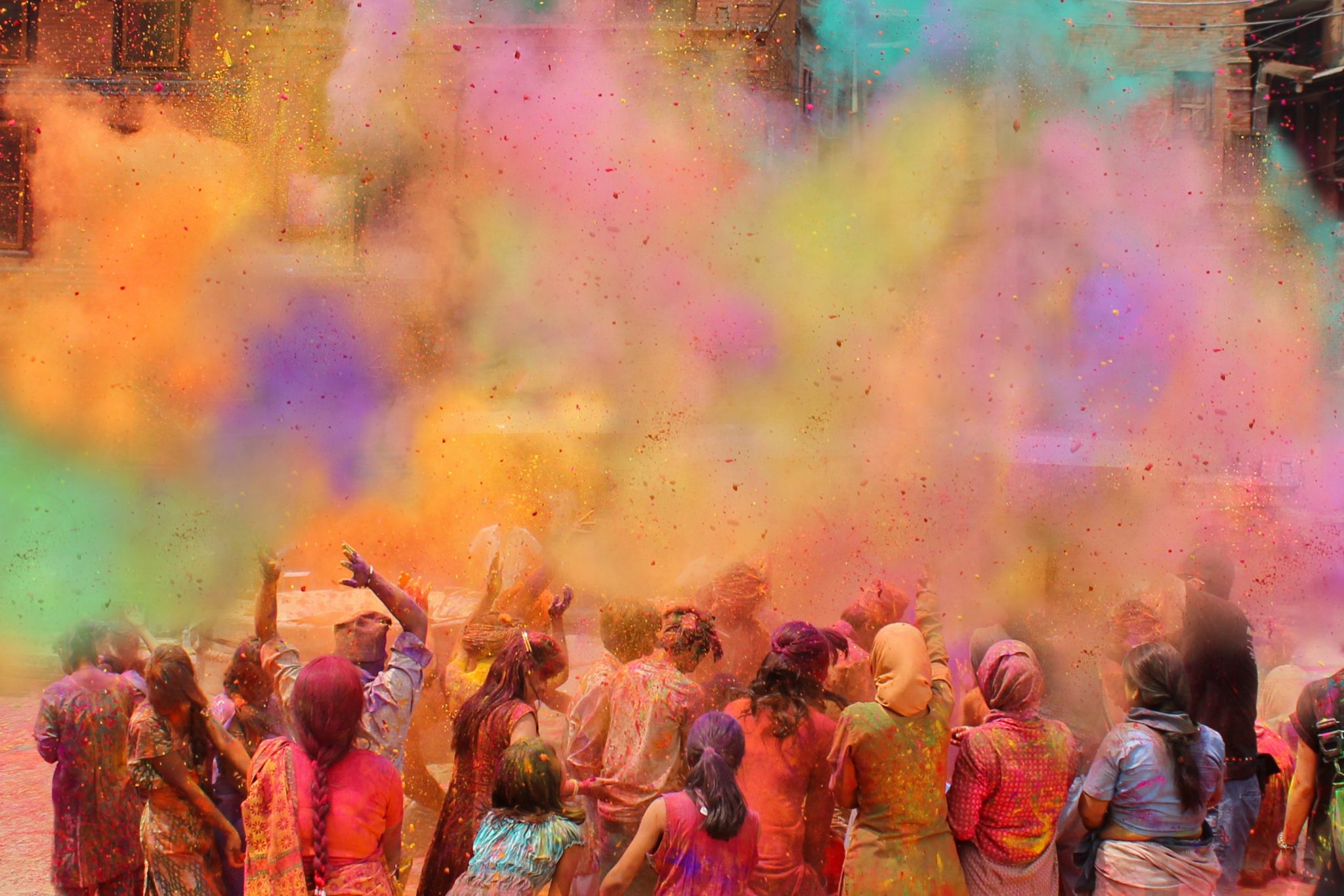 As the struggles against white supremacy and settler colonialism have shown us, releasing the myths that reinforce systems of oppression are the first steps to liberation. If you are serious about caste abolition, and the rights of South Asian Indigenous and religious minorities, you must confront the truths about Holi and work to challenge Brahminical positions on history from the South Asian experience.

The Indian festival of Holi holds a pivotal place in South Asia’s social and cultural mind space. It has lent itself to numerous songs, films, books and movies — all celebrating the triumph of the gods over demons, culminating in the burning of the Demoness Holika. The ritual burning of Holika has translated for Savarna (upper caste) Americans into a festival of colored powders, color runs, and family gatherings, without much regard to the violence that many oppressed caste and Indigenous communities associate with Holi.

[Read Related: The Death of Holika, What it Signifies and How it Translates to Modern-Day Holi Celebrations]

For centuries, activists and historians from India’s Indigenous communities and oppressed castes have argued that the myths around Holi were deliberately built to hide a violent overthrow and conquest.

Drunk on power, Hiranyakashipu, a demon king, ran amok, striking terror into the hearts of his subjects. It is said that he could not be killed by:

Neither by man nor animal

Neither indoors nor outdoors

Neither in the day nor at night

Neither on land nor in air or water

Neither by Astra (weapons) nor by Shastra (handheld weapons)

With this grant of immortality, he grew violent and domineering over his subjects and his family. His young son, Pahlad, was determined to avoid his father’s path of violence and devoted himself to a life of piety. He was dismayed that his son had become a devotee of Vishnu and declared that he needed to be put to a painful and violent death. He entrusted his sister, the demoness Holika, with the job.

Holika had a distinctive cloak that prevented her from being harmed by fire. King Hiranyakashipu tricked his son Prahlad to sit in a bonfire with his aunt. As a fire raged around her, the cloth would protect her, but would then kill her nephew, who had no such protection.

But the god of wind — an ally of Prahlad — had other plans. Gusts of wind guaranteed that the fire-resistant cloth wrapped itself around Prahlad, protecting him, while Holika was burnt by the fire … And so the young boy is saved.

Afterwards, Vishnu appeared as his avatar Narasimha, a half-man and half-lion. He then took King Hiranyakashipu to the doorstep, and placed the king on his lap and used his sharp lion claws to kill him, sidestepping the Hiranyakashyap boon that he couldn’t be killed by either man or animal, inside or outside, or during the day or night. He is killed just as dusk sets and goodness won over evil.

This supposed evil-triumphs-over-good story forms the bedrock of Holi. But this is not the only version of the story.

The alternative version of the myth says that Hiranyakashyap is not a demon king, but a king from an Indigenous community of people called Asurs, which roughly translates to demon in Hindi. Asurs still live in large numbers in the eastern part of India. As an Indigenous king, Hiranyakashyap incurs the wrath of the devas — groups of non-Indigenous people — a different clan of rulers, or people who brought the caste system into India, depending on which oral history version you subscribe to. The devas — who are not gods, but simply a rival clan who consider themselves superior to the local people — manage to lure Hiranyakashyap’s young son to their fold, much to the distress of an anguished father; and a final blow to the embattled king, manages to burn to death his beloved sister Holika.

Days later, the king was killed by The Asura kingdom is vanquished, and the rival clan quickly spread their control, capping their bloody conquest with a religious mythology that sanctifies their settler colonialist schemes.

This is why caste oppressed and Indigenous people refuse to celebrate this colonial and casteist retelling of Holi. The connection between Holi, the violent overthrow of an Indigenous king, and the murder of Holika has been passed down generation to generation using oral histories, poems, and songs by India’s oppressed castes and tribes, many of whom consider themselves the original inhabitants of the land.

The Indigenous retelling of this myth reveals the challenges of celebrating festivals when these mythologies are written solely by Brahmins. Most of the early written history of South Asia was controlled by Brahmins because Indigenous people and oppressed castes were forcibly and violently kept away from knowledge production.

Holi also further reifies Brahmanical Patriarchy by encouraging casteist and sexist slurs that are ritually hurled at Holika’s figure as part of the ritual. This translates into the widespread violence against femmes in cities where Holi is practiced, creating a turbulent and frightening environment where gender-based harassment attacks rise during this time. This includes groups of men throwing balloons filled with rocks, water, or even semen at femmes who are walking in the street. We cannot expect more from a festival whose heart is quite literally the burning of an Indigenous woman.

The violence on Holi is a reminder of the continued aggression against marginalized peoples and creates license for even more during this time. That is why many femmes, caste oppressed, and tribal people stay away public spaces to avoid these attacks.

It is also possible that the myth of Holi appropriated an Indigenous or local spring festival — because there is a long history of appropriation that brought local myths and gods into the so-called Hindu fold — and incorporated the violent burning of Holika into it, making this festival even more problematic, adding to the appropriation and erasure of Indigenous culture.

Speaking Out Against Holi

In his article Holi — A Festival To Commemorate Bahujan Burning, K Jamanadas, citing sociologist GS Ghurye, saying that before it was outlawed, the fire to burn Holika is brought from the home of a Dalit person. And because touching a Dalit person is considered polluting under orthodox Hindu scriptures, the festival ends with a shower.

The truth about Holi was also elaborated in great detail by Jyotiba Phule, the 19th-century reformer and scholar, in his text Gulamgiri, where he counters the prevalent myths around Holi but also places it in the context of a class and power struggle against the asuras. Phule interpreted the Holi story this way: He said that Holika knew that Brahmin nationalism would annihilate her culture and her people and warned the brainwashed Prahlad who could not listen. She organized action against the Devas and was their final hurdle to power. Phule claimed that this is why she was burned.

In his Philosophy of Hinduism and Annihilation of Caste, B.R. Ambedkar, an Indian sociologist, legal scholar and architect of the Indian Constitution, elaborated on how many so-called Hindu festivals appropriated Indigenous and Buddhist traditions and recast them into violent casteist histories.

What Does it Mean for Savarna Americans in the U.S.?

Because of the upper-caste cultural domination of the South Asian diaspora, there has been a steady saffron-washing of the violent nature of Holi. It has been recast(ed) as a festival that celebrates the victory of good over evil. This allows for the de-casteing of the South Asian diaspora, racializing our identities without understanding the complexities of Dalit, Indigenous, and Bahujan people.

This revisionist history is dangerous. It can be difficult to talk to families and friends about a festival that is seen as colorful, fun, and triumphant. But it is crucial for upper-caste Americans to speak out.

Here are some things you can do to talk to your friends and family about Holi:

With the rise of violence against Muslims, other religious minorities, Indigenous, queer, and caste oppressed people, the time to organize is more urgent now than ever. This work requires a deep cultural shift, to center Indigenous and Dalit Bahujan communities, and collaborate towards a liberatory framework that frees all of us.

We work at the intersection of political organizing, community based participatory research, socially-engaged arts, & digital security. Follow us @equalitylabs.