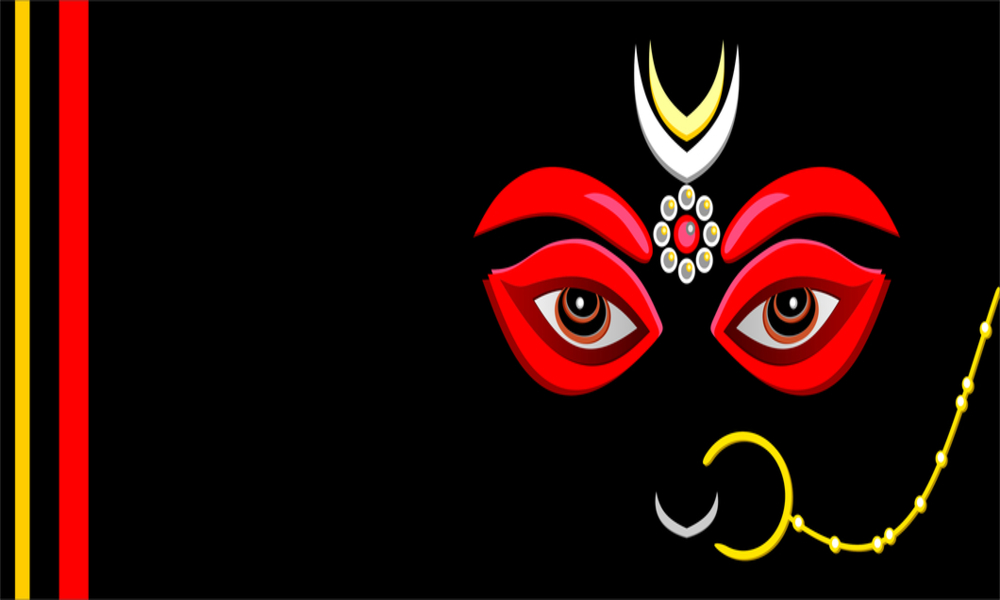 A while ago, I encountered a particularly disturbing listicle article published on Buzzfeed titled “26 Products For People Who Aren’t All That Friendly,” when I stopped short after seeing a description of a bag of loose-leaf tea. Chai black tea to be specific.

It was called “Blood of Kali,” which was written in a Devanagari-esque font.

When I first saw the image, I froze. I was almost confused.

In this image, Kali is depicted with yellow demonic eyes, a reptilian tongue, and is shrouded in green snakes. In her arms, she holds a sword, a decapitated head, a flower, and what appears to be a pair of scissors. Kali’s depiction in this image was nothing short of horrific Because she was painted specifically in the image of some monstrous entity.

This is, disturbingly, not an isolated example. Western culture has unabashedly twisted Hindu culture into whatever they want it to be. For example, here Kali is portrayed as a demon, while Disney World’s Kali River Rapids is a fun, family-friendly ride (located in the Animal Kingdom because what are brown people if not primal?).

The depiction of Kali in the same context as a demonic gingerbread figure pushes a dangerous message; Kali is nothing short of a monster. Consequently, those who view her as a goddess are nothing short of demon worshippers.

Representations of Hindu culture that appear synonymous to horror entirely overlooks the beauty of Hinduism. Kali is not a monster created for the pleasure of white people who enjoy feeling cultured while drinking “chai tea.” Kali is a protector, the destroyer of evil. Yet here she becomes evil incarnate.

While I am not Hindu, my parents believed in the importance of being educated about other religions and cultures to build an environment of tolerance and respect. I grew up with the words of the Ramayana and Bhagavad Gita flowing through me. I formed ideas about the innate beauty these tales carried.

But when Western corporations decide to distort other cultures, all beauty is replaced with pure darkness and mockery.

This is not okay.

It is not okay to degrade what others hold sacred in a cheap attempt to make money. Minority groups don’t exist for white people to capitalize on. These same individuals have long made the executive decision to make a mockery of “exotic” cultures. This has manifested in everything ranging from ‘Nama-stay in bed’ t-shirts, all the way to devastating representations such as this tea. And the worst part is that we’ve stopped condemning this type of behavior. We’ve normalized it so much that people think it’s acceptable to manipulate religions and cultures however they wish to.

The depiction of India and Hinduism that I see in Western culture is not the image I grew up with. In an environment of extreme polarization and intolerance, these depictions are more than ignorant—they’re dangerous. They promote the idea that, to at least some extent, western societies have control over the narratives of other cultures and that these are the narratives that matter.

No matter how common these images have become in popular culture, there’s no justifying them. It’s time to put an end to these detrimental distortions of non-white cultures.

Apoorva Verghese is a Paul Tulane Award winner studying at Tulane University, pursuing a double major in Psychology and Linguistics with a minor in Spanish. She hopes to pursue a career in civil rights law. In her free time, Apoorva enjoys binging Netflix and exploring beautiful New Orleans.