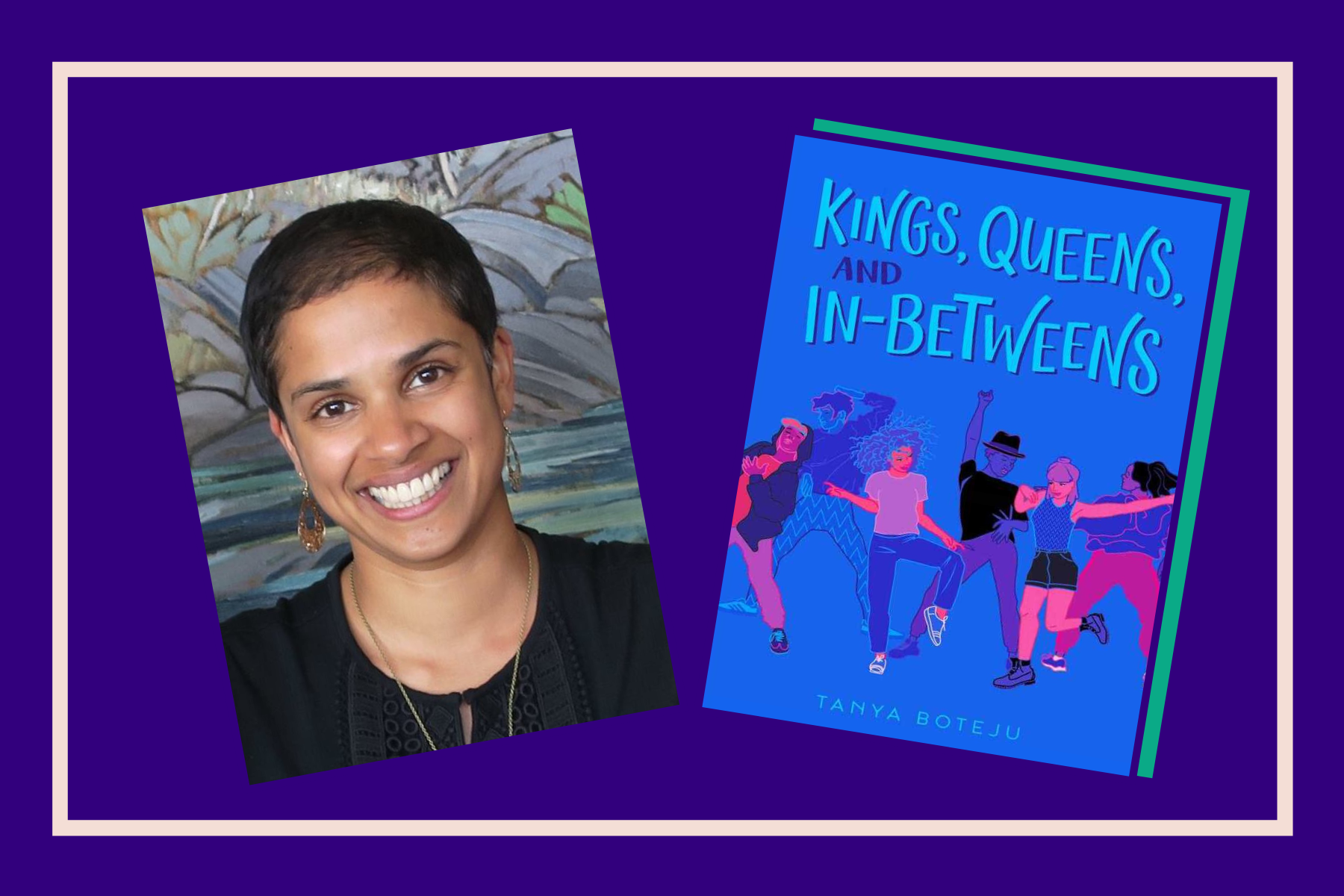 Tanya Boteju’s debut novel, “Kings, Queens, and In-Betweens” popped into my inbox via an unexpected source: my Sri Lankan grandmother. While my grandmother sends me plenty of emails, it’s not often that she sends me a book about a queer, mixed-race teenager who finds her voice (and herself) with the guidance of drag queens.

Boteju describes “Kings” as “Judy Blume meets Drag Race” for its funny and endearing take on what it means to grow up queer, Brown and awkward. The book’s protagonist, Nima Kumara-Clark, is a queer, mixed Brown girl but her story breaks away from the traditional coming-out story trope. Instead, Nima navigates the same adolescent angst and awkwardness usually reserved for Blume’s white characters—just add drag queens.

When I read the book, I knew I had to get in touch with Tanya Boteju, the queer English teacher and writer who created the colorful, diverse world Nima inhabits. The book, a Young Adult novel released by Simon & Schuster in 2019, captured the hearts of teenagers (and grandparents!) by doing what YA books do best: show you what the world could look like.

How important was it for you to write a queer Brown character going through ordinary teenage issues?

It was always clear to me that this protagonist was going to be queer. However, it’s funny that when I started writing this book, originally, Nima was white because in my head that’s what protagonists looked like. This is after years of doing diversity workshops at my school and calling myself an intersectional feminist. I had to consciously stop myself and look at whether what I was writing was in line with my values. It’s weird, right? I’ve never been a teenage white girl but when I started writing a novel that’s what came naturally to me.

All the characters in this book are diverse; not one is a stereotype. How did you make sure these characters were well represented? How did you write, for example, Nima’s love interest who is half-Japanese?

I did various things. Some of my beta-readers inhabited the various identities that I don’t. For characters doing drag, I pulled from some of my own experiences and did the super fun “research” of going to drag shows and getting caught up with the drag scene now. The drag scene has changed so much, too. I was doing it 20 years ago so it was really interesting to see what the trends are now and get a sense of what was different from my experience. The biracial characters really came from deep conversations with people in my life. There wasn’t formal research there, just lots of conversations. I have three queer characters in my book, but not all of them were representing one identity on the spectrum.

Why did you choose to write a YA novel?

I’m an educator and I work in a really open school, but kids still have a hard time accepting themselves or coming out to their parents. For me, it was really about my commitment to those kids. These are the people I feel need more diverse literature and need to hear these stories.

Have you always read YA books?

I didn’t read them before I started writing one myself. There is something so comforting about YA literature because no matter how old we are, we can all tap into those feelings of isolation, loneliness, awkwardness and wanting to fit in. YA gets a bad rap in the larger literary community but I think one thing it does better than any other genre is the diversity aspect. The authors (not me!) are often younger and tapped into it more. I really think more adults should be reading these books because they really teach you a lot about people and culture without over-intellectualizing. What better way to learn about someone different from you than through a story?

I heard you have an upcoming book too! Can you share more about it?

Yes! My upcoming book is a YA novel as well and the protagonist is Sri Lankan, too—fully Sri Lankan this time. Her parents die in a car crash before the book begins and she’s taken to bruising herself to cope with that. So, when a friend invites her to roller derby, she uses it as an opportunity to bruise herself further. She ends up finding strength, and a lot more, through the experience.

Something refreshing about “Kings” and your upcoming novel is how your character’s Brown-ness or queerness isn’t the focal point of the story. Was that intentional?

Exactly! With “Kings” a few people sent me feedback wanting to know more about her culture and I had to say, you know, that that’s not what this story is about. With my upcoming novel, I bring in the character’s cultural background a bit more because it’s central to the story. Something I think about a lot in my writing is, What is the right amount of letting these characters live in these identities and how much of it is letting those identities be? You know, letting them be queer. Even with Nima, I was really set on it not being a struggle with her sexual identity.

[Read Related: Young Adult Novel ‘Love, Hate and Other Filters’ is the Book we Didn’t Know we Always Needed]

Do you think the type of story you were writing made it harder to get published as a new author?

I think it’s the right time to be publishing this kind of book because there is a huge desire for these stories right now, especially with young readers. Also, I think drag culture has recently become overtly mainstream. I mean, everyone watches Drag Race. So the book just naturally found itself into the right hands. My editor at Simon Pulse, the Young Readers imprint of Simon & Schuster, is always on the lookout for stories like Nima’s.

Both your parents are Sri Lankan immigrants, how did they react to the novel’s queerness?

It’s been interesting. They found out about my years as a drag king after this book was published. I came out to my parents when I was 19 and my mum had a really hard time with it. There was a 10-year period during which we hardly talked about it. She’d meet my girlfriends but we never really had a deep discussion. I was doing drag regularly at that time and, aside from my sisters, I never told anyone in my family. When the book came out, my mom, who is now in her mid-70s asked, “What is this drag thing you’d do? Why didn’t I know about it?” So I watched an episode of Rupaul’s Drag Race with her. Once the episode was over she looked at me and said, “Well now I must know who wins.”

Later, she came to one of my book events where we had a panelist of drag kings telling their stories. Afterward, I heard her on the phone with one of her friends saying, “I learned so much. There is so much more to learn.” So it’s been a lot of learning and a lot of growing on everyone’s part.

You can purchase “Kings, Queens, and In-Betweens” from Simon & Schuster. Follow Tanya on Instagram to keep up with her work!

Nicole Pereira is a writer and creative strategist based in Brooklyn, New York. Her work meets at the intersection of culture, art, and community. She is the co-founder of 12 Ounces, a podcast and community space for people of color. Nicole has been published in The New York Times, Spicy Zine, The Manhattan Globe, Bushwick Daily, and more. She spends her free time drinking chai with her roommate and has a cat named Cat.