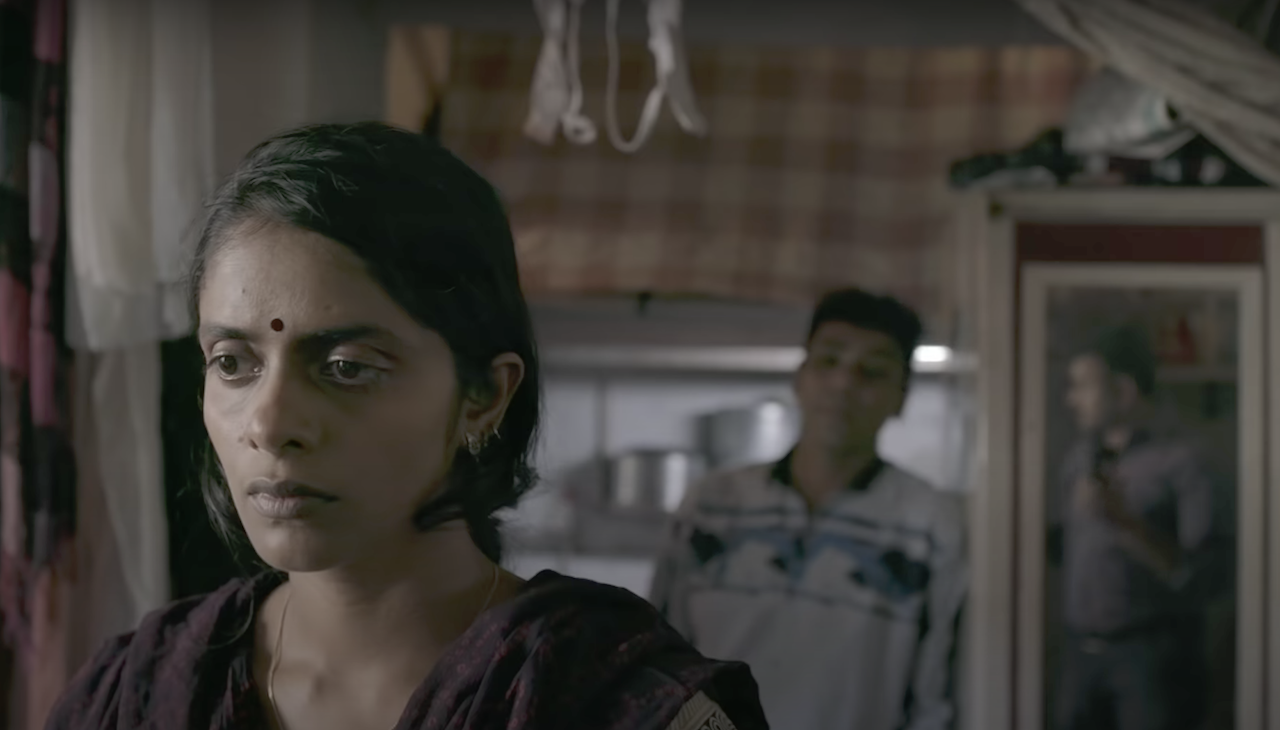 As our regular and highly anticipated film festivals are postponing and cancelling their 2020 schedules due to COVID-19, the Indian Film Festival of Los Angeles, aka IFFLA, chose to re-visit some of their best films in a new virtual festival called “IFFLA Over the Years.” This article zig-zags through the thematic exploration of identity politics in three such short films that returned to the “IFFLA Over the Years” spotlight, between June 19th and July 5th.

“Counterfeit Kunkoo” is a feminist critique on exclusionary housing practices taking place in Bombay. In this 15-minute film, director Reema Sengupta complicates the protagonist Smita’s victimhood by illustrating her agency as she searches for a home after leaving her abusive husband. Specifically, Smita searches for apartments across the metropolis and consistently finds herself being denied by landlords because she is a “bachelor” (single woman).

Smita learns how to play the system by placing tikka on her hair parting and locating her mangal sutra. She fakes being (happily) married to find a place closer to freedom. When she enters her new home, she immediately washes the tikka off of her parting and proceeds to physically pleasure herself. But she is then interrupted by someone who just arrived at the door. She is given news that indicates to the audience that Smita’s path to freedom doesn’t end there.

“Counterfeit Kunkoo” has a timeless message. In fact, lead actress Kani Kusruti’s life as an activist and a blossoming artist has indeed been shaped and impeded by the problematic patriarchy.

“Kush” is an incredibly touching story stemming from the 1984 Sikh Genocide. The story is about a schoolteacher who shows the entirety of her class compassion as they try to make their way home from a field trip but are repeatedly harassed by Hindu fundamentalists who are trying to identify and attack Sikhs.

In this 25-minute film, director Shubhashish Bhutiani shows the fear the Sikh community were pushed to experience during that part of Indian history. This film fits nicely with the disappointing times we find ourselves in where fear-of-the-other manifests as a divisive political topic.

As a former teacher myself, it reminded me how different students rely on varying needs of protection, love and guidance depending on the weight that society places on each child’s identity.

The pace of the film is heavily controlled by the dialogue between the teacher and the bus driver. The bus driver mocks the teacher’s honorable actions and she accurately accuses him of being a coward. There is tension due to their ideological difference and different calls to act.

Whether it’s white supremacy in the U.S. or the Hindutva ideology in India, these intersecting injustices show us the universal need for reparations and accountability. Kush shows us that happiness is not the destination; that type of narrative is oversimplified, essentialized and conflating. This film thus leads us to wonder: how can we view happiness and joy, however ephemeral, as a transnational process of radical love?

“The Manliest Man” returns us to discussion about womanhood and gender equality. This episodic drama is based in an archetypically traditional village in India, yet has a completely fictional premise. Whether fact or critical fiction, female infanticide continues to be an issue in many countries, including India, and this film possibly brings attention to this need.

The film makes attempt to problematize ways that casteist leaders may try to “help” Dalits and people of the “untouchable cast.” In the case of this film, the village chief publicly announces his belief that a first daughter is a gift, but a second daughter is a blunder for the family. The chief openly recruits men to insert themselves into a potter’s existing marriage to gift them chances at having a son.

While this film may aim to bring voice to concerns regarding women and their rights, women’s agency is completely lacking from the film. All the main characters are men and the women play secondary and tertiary roles yet their objectified bodies are never given voice. Although the film clearly mocks the intersections between toxic masculinity and politics, it is important to remember there is power in filmmaking.

Filmmaking is inherently political. Voices are included, voices are excluded. Images have the potential to dispel or reify assumptions in our minds. There is intention, and then there’s interpretation. This film fails to consider what women think, say and do in response to their experiences within a culture that only conditionally accepts them. This film already bleeds into existing stereotypes about the culture of the Other.

Had Anuj Gulati’s “The Manliest Man” given voice to the women who were heavily involved in the plot, then it would have ranked highly alongside other “IFFLA Over the Years” standouts, Reema Sengupta’ s “Counterfit Kunkoo” and Shubhashish Bhutiani’s “Kush.”