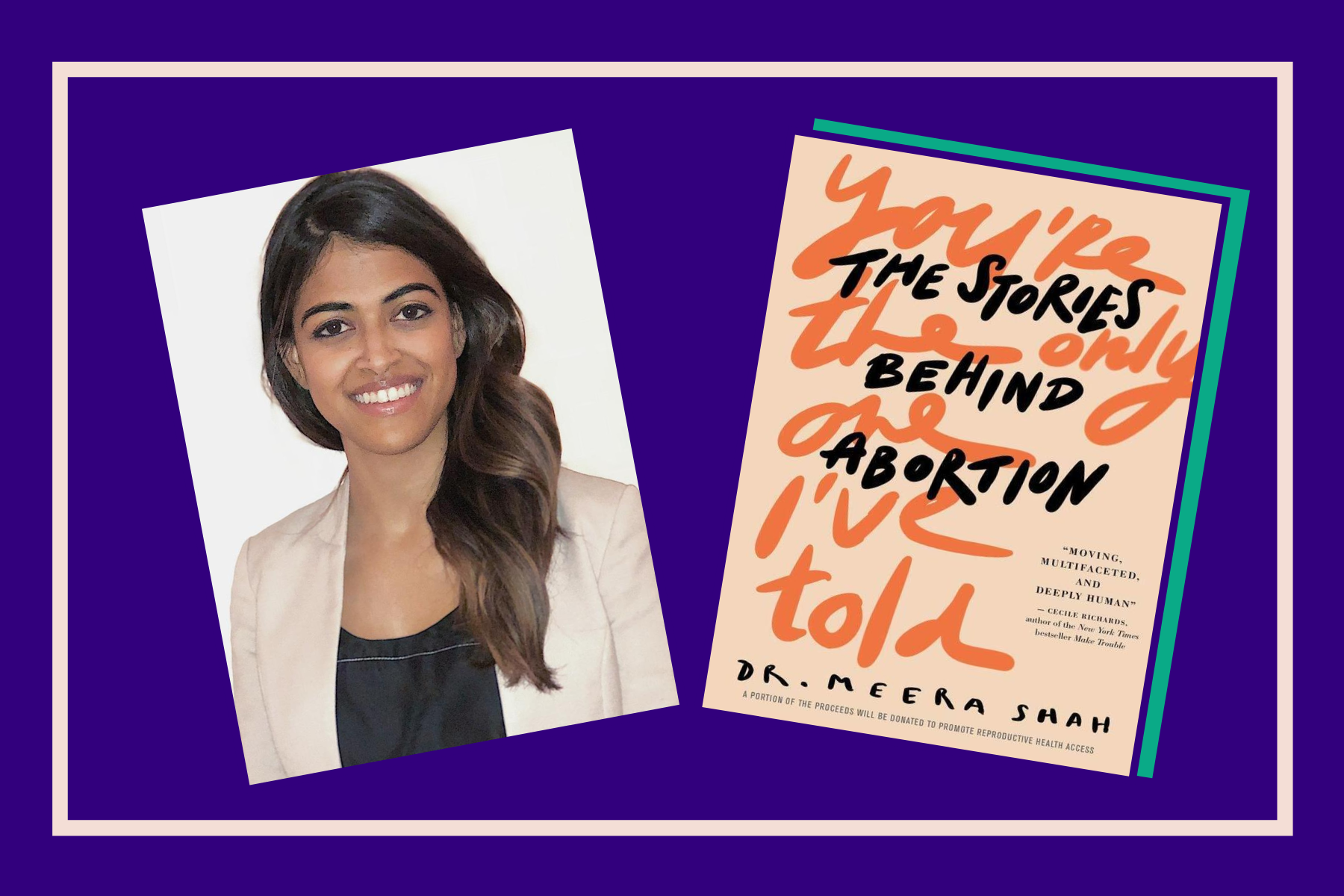 This sentence sums up the entire mission of Dr. Meera Shah’s latest book “You’re the Only One I’ve Told: The Stories Behind Abortion.” The book is a collection of 17 true stories about people from varying backgrounds who all had different reasons and circumstances for deciding to have an abortion, and faced systemic and policy barriers to accessing one easily.

Dr. Shah, a daughter of immigrants, is an Indian-American doctor who provides abortion care and is also the Chief Medical Officer of Planned Parenthood Hudson Peconic in upstate New York. She is also a vocal advocate for women’s medical rights, and sexual and reproductive justice, particularly in underserved areas. She chose to talk about abortion through the lens of personal stories to elucidate the challenges womxn face while trying to access a medical procedure because she believes that stories have the power to increase understanding.

These stories span a long period of time, starting from 50 years ago to the present. Using these stories, she walks the reader through the arduous evolution of abortion and reproductive health policies in the United States at the federal and state levels. She effortlessly weaves policies into the narrative to discuss how they impact the unique situation of an abortion journey. The stories are about minors, military families, intimate-partner violence, fetal health and development, “late-term abortion,” womxn of color, and queer pregnant people who don’t fit the gendered-sphere of pregnancy and abortion. She uses these different circumstances to highlight the restrictive policies around accessing abortion and the hidden costs that are placed on distressed patients.

Dr. Shah presents policies in an easy and digestible form. She translates the complex policy language into real-life scenarios and defines the negative impact they can have. For example, many state provided insurance companies do not cover the cost of abortion. On top of that, arbitrary “wait periods” (state mandated periods of time between an ultrasound and performing the abortion) result in loss of income due to missed work. Womxn also have to bear the added cost of overnight lodging and travel because so many of them have to cross state lines to access a health center that provides abortions. Moreover, most womxn are racing against the clock due to restricted time limits on when an abortion is allowed. Many states have a cut-off period of around six to ten weeks, and usually, most womxn don’t even know they are pregnant until around four to six weeks. Policies like these work together to create heavy restrictions on a womxn’s ability to access a safe abortion.

It is important to understand abortion policies because they impact health care and insurance policies, which, in turn, impact pregnant people. For example, she shares a story about an Indian-American womxn from Indiana, Purvi Patel, who was sentenced to 20 years in prison for inducing her own abortion, essentially implying that the rights of the fetus are more important than the rights of the womxn. According to Indiana law, a person can be found guilty of feticide for trying to end a pregnancy, even if the fetus survives. I, too, was humbled to learn of so many policies, including ones that I had misunderstood. The book inadvertently compels anyone who desires to be pregnant, or can become pregnant, to seek out and thoroughly understand the convoluted laws surrounding pregnancy in their state.

Why is such a book important right now? Because, as Dr. Shah mentions in her book, one in four women in America have had an abortion. This collection of stories shows that this statistic cuts through race, class, ethnicity, and religion. They dispel the myth that abortion care is a black-and-white conversation—that either you are pro-choice or you are pro-life. Through the retelling of these experiences, Dr. Shah shows the reader that abortion intersects with many other social issues including sexual and reproductive health rights, social justice, race, gender, and socio-economic status. Most importantly, this book highlights the abundance of unscientific misinformation involved in curtailing access to abortion.

The misinformation campaign from the anti-abortion camp is very organized and powerful. I was shocked to read that some states mandate physicians to inform patients of factually inaccurate information like “having abortions impacts fertility,” or “having abortions can have negative impact on the pelvic area,” or that womxn are forced to have medical procedures like pelvic exams and ultrasounds that have no bearing on their abortion procedure. Some states are trying to push for draconian laws that would force the person obtaining an abortion to get consent from the person who impregnated them, which would endanger the lives of many womxn across the United States. Eight states mandate their physicians to tell patients that abortion causes mental health issues and increases the risk of suicide—something that is not based in scientific research.

The list of factual inaccuracies is endless. This is why abortion books, advocates like Dr. Shah, her many colleagues, and abortion organizations are so important. They are doing essential human rights work—fighting to keep womxn safe and well-informed when it comes to bodily agency and reproductive justice.

“While I recognize the stigma and shame that exists around sex and abortion in my culture, I also believe that by sharing stories, like the ones in my book, we can get to a place of acceptance.”—Dr. Meera Shah

Abortion is not openly talked about in South Asian communities. It is enshrined in narratives of shame, secrecy, and sin.  As I was reading, I felt deeply grateful for the diversity of stories and voices in this collection. There were the stories of Maya, a Hindu-Gujarati womxn, Noor, a Muslim-Bangladeshi womxn, and Luna, a Punjabi womxn. As a Muslim womxn, I was heartened to read a story of someone like me. Dr. Shah doesn’t shy away from putting difficult aspects of our culture in print to show the impact certain cultural values have on health, safety, and wellbeing.

The diversity in the stories is the biggest strength of this book because it highlights the universality of the need for safe abortion access. Most South Asian youth and young adults are left to their own devices to navigate the complicated waters of sexual health and identity. Access to safe and affordable health centers like Planned Parenthood is so vital to the health of communities. Planned Parenthood has a role in almost every story as a place of abortion care, of correct information, support, and advocacy. As a young South Asian womxn myself, I have often turned to Planned Parenthood to access sexual and reproductive health services. When pro-choice organizations and abortion clinics are attacked, like when the Trump administration changed Title X funding, the consequences on the communities they support are enormous.

“Storytelling creates emotional connections between people. By sharing the nuances of culture, history, and values, people and ideas are united through their stories.”—Dr. Shah

Dr. Shah narrates these stories with the warmth of a friend and with a shame- and judgment-free voice. She is very intentional in her use of gendered language to make sure that all experiences are captured. She includes the voices of cis-heterosexual males, trans-men, and queer people. The collection of stories also spotlights the strength and resilience of other advocates who amplify the message of sexual and reproductive justice. We learn about Rep. Pramila Jayapal’s experience with her abortion and Dr. Rebecca Gamperts, a Dutch womxn who provides abortions on a boat in international waters to make this essential health service available to womxn in need.

“You’re the only one I’ve told” is an impactful, succinct, and honest collection of stories that takes an expansive look at the different types of abortion circumstances across a variety of demographics. I found myself deeply moved by the struggles so many womxn face in this country when it comes to choosing abortion, regardless of their circumstance.

Too often, the realities of abortion care are muddied by religious and moral distractions. Dr. Shah is not discussing the moral or religious gray area, which is a refreshing change from the rest of the popular discourse surrounding abortion. She presents a perspective rooted in science and fact and her message is clear: abortion access needs to be viewed as a part of health care, and everyone has the right to safe and accessible abortion care.

Now it is up to us—as advocates for equality and freedom, users of the health care system, and a community—to arm ourselves with knowledge and correct information to further the cause of reproductive justice.

For anyone looking to support the cause for abortion access, the book includes a section that lists all the incredible organizations and  advocacy groups mentioned throughout the book.