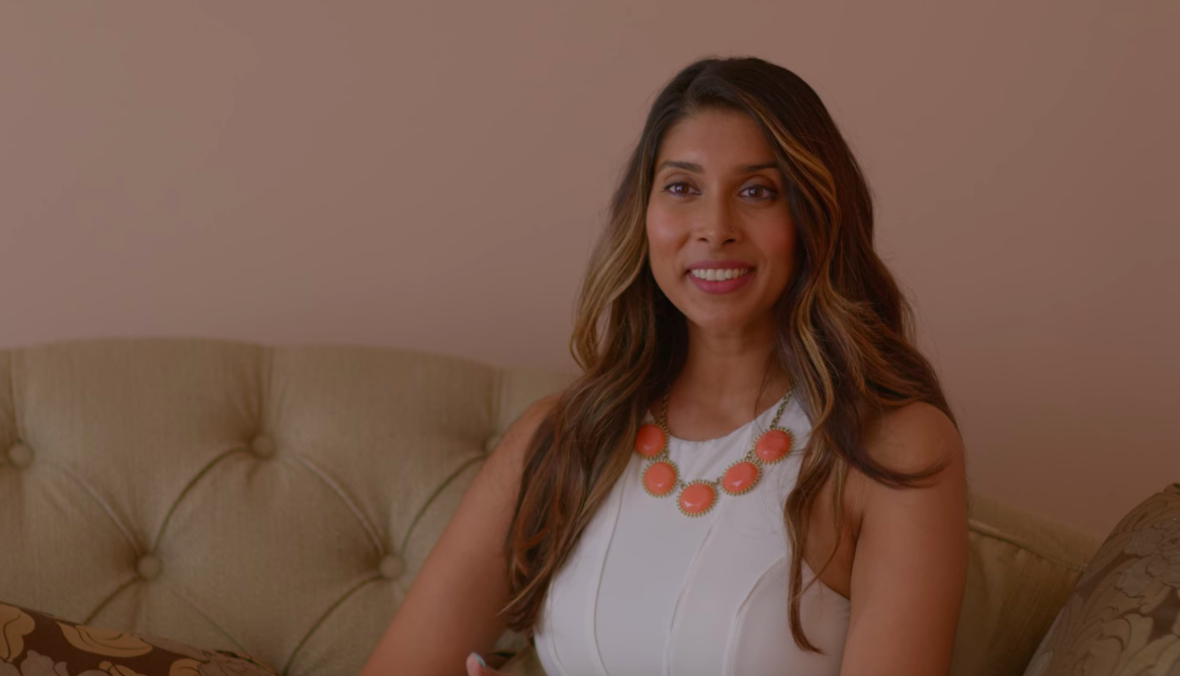 July 16 marked the premiere of Netflix’s hit television docu-series “Indian Matchmaking.” As many of us grabbed our popcorn, and settled in with our girlfriends, mothers and even aunties, we fell into binge-watch haze episode after episode observing eligible singles on a journey to find “the one.”

It looks like everyone binge watched Netflix's “Indian Matchmaking" this weekend! And from the sound of it, the feedback is most definitely a mix of love-hate, and for good reason. The show very much feeds into the prevalent stigmas and taboos South Asian womxn face every day. From the sometimes subtle to other times overt jabs of classism, sexism, colorism, casteism, to discussing stigma surrounding divorce and mental health, the show gives us a horrid inside look on the pressures we face before tying the knot. While we rooted for the candidates to find true love, we can’t deny the show's glamorization of age-old stereotypes of South Asian customs and traditions.??????? — Before the release of the show, Brown Girl contributor @sarahanwerkhan spoke with Oscar-nominated creator and co-producer @smritimundhra, who once hired the services of Sima Aunty, to discuss her hopes for the show, its intention and what’s next! — "It’s all fair game, once people watch the show there’s going to be a lot to love about it and a lot to critique about it. Critique not only the show but our culture and our mindset around marriage at large. And I think that’s all very valid to talk about. Only once you start talking about taboo ideals relating to classism, colorism, casteism, and divorce out in the open, hopefully then we can change our society's mindset once and for all.” — Smriti Mundhra ???? — Head to the #linkinbio for Smriti’s full interview, and to learn about the process of casting, working with matchmakers and more. P.S. We're thinking of hosting a virtual viewing party to discuss and vent about the show in greater detail — comment below if you'd join!????

Enter matchmaker Sima Taparia from Mumbai (she never fails to remind us where she’s from). Sima Aunty has been in the game for 15 years and has a well-regarded reputation for a reason. The show’s producer, Smriti Mundhra, met Sima almost two decades when she was hired to find Mundhra a suitable life partner. Even though Sima Aunty was unsuccessful in finding her a match, Mundhra’s producer hat turned on. She knew a show following an Indian matchmaker could be  both eye-popping and fulfill the guilty pleasures of millions around the world.

While many find the show’s cultural context interesting and are curious to see how these matches are made, it’s most definitely stirred up longstanding issues within the South Asian community. From the sometimes subtle to other times overt jabs of classism, sexism, colorism, casteism, to discussing stigma surrounding divorce and mental health, the show gives us a horrid inside look on the pressures we face before tying the knot.

As an Indo-Caribbean woman myself, the highlight of the show for me was cast member Nadia Jagessar. My first impression of Nadia was that she had an easy and pleasant way about her. She resembled a girlfriend you’d call when things aren’t going right, the one who offers nothing but love and support. My own mother swore if she had a son she would want Nadia for him.

“Meh like she, she wan good gyal,” she said.

We learned early on Nadia is a wedding planner and a recreational Bollywood dancer, who loves everything about her hyphenated Indo-Caribbean-American background and wants more people to understand her ancestral roots. It’s clear Nadia has felt like an outsider for not being Indian enough, and this notion of Indo-Caribbeans not being “Indian” is evidently reinforced when the matchmaker makes it clear she would have a harder time finding Nadia an Indian match. It’s no surprise because many Indo-Caribbean women who have dated Indian men can relate. Being a fusion of Indian and Caribbean culture is sometimes viewed as not being too different.

Nadia broke the mold for Indo-Caribbeans living in the Diaspora. With her bubbly laugh, raw and candid feelings for some of her dates, she makes us feel seen, and for that we love her. Thankfully, we had the opportunity to sit down with Nadia virtually and get to the bottom of the show.

What made you want to work with a matchmaker? How did you get on the show?

“My dance company receives a ton of emails so that’s how I first heard about the ‘matchmaking project,’ which is how it was originally positioned. My girlfriend who monitors the inbox sent the email to me and was like, ‘hey, are you a single South Asian millennial?” And I was like ‘yeah I am!’ So that was just kind of how it started, and I had nothing to lose by just trying. You know, you sign up for these things and are like ‘oh they’re not going to pick me, like whatever.’ And then it started going through and getting more serious and I was like ‘whoa, this is real.’”

What were your initial thoughts when you learned about working with a matchmaker? Did you think it was old-fashioned or was it pretty cool?

“Honestly, I was kind of excited because my parents were matched the traditional way. So many couples in my family are matched weddings and so I was like, ‘oh yeah, there can’t be anything terrible about this.’ And dating is really tiring let’s be real. I tried the app, I tried dating people through friends and it’s exhausting. So I was like, ‘okay, at least this matchmaker can bring me somebody, who you know, has already been filtered and hopefully more serious than someone else I’d be meeting on an app or through a friend or whatever.’ So that is what I was actually looking forward to the most — that she was gonna bring me people who were already, as my friend Draya said, ‘pre-vetted.’”

Obviously, on the show, you touch on Guyanese culture. How do you feel dating is different when dating Indo-Caribbean men and Indian men?

“So, I’ve only dated one Guyanese guy in my whole life. Most of my boyfriends have been Indian, or Gujarati specifically. I would say it was different dating my ex who’s Guyanese because I didn’t have to explain to him why my family acts a certain way, what we do, or why our culture is similar but different to theirs. So that was very easy and it’s nice in that way, but you know my boyfriends that were Indian didn’t take the time to pause and understand the differences. I think maybe because they didn’t want to take the time to learn about me. But I think that’s probably the ease of dating someone who’s Indo-Caribbean versus dating someone who is from ‘mainland India.’”

How did your Guyanese family feel when they first learned you were going to be on the show? How did they feel knowing you may have producers or cameramen come to your home and film? Were they open to being on camera or was it a shock to them?

“The first time the crew came to my house it was three weeks after my parents had the transplant surgery. Before this my mom was busy taking care of my dad so when filming started was the first time she was putting on a dress and dolling up with a little bit of a makeup. But my dad was quarantined in the bedroom because at that time he wasn’t going to be cleared to see people for another two months. It was hard for them, and they were understandably very nervous to have the crew film in the house for the first time. By the time they came back around for the second time, my dad was feeling much better so that’s when you see us having breakfast together in the morning, going over the second set of matches Sima aunty sent. I am grateful because my parents are super supportive and for any crazy idea I’ve ever had my entire life, they’ve always been the type to say ‘let’s just figure out how to make it work’ and that was exactly what we did here too.”

You work in the wedding industry. You see women walking down the aisle or sitting under the mandap. Some single women find themselves frustrated with the dating scene. Does experiencing weddings give you hope or does it make you wonder, “when is it going to be my turn?”

“It’s a little bit of both because sometimes I see the side where couples are fighting, families are upset about certain things. I’m always thinking, oh, gosh—this is the unpretty side or the unglamorous side of married life, but it’s also the reality. But then I also see, you know, the look on a groom’s face when his bride is walking down the aisle and when the sheet drops at the altar and they look at each other and I always think, “I really want that” or when they’re having their first dance and they’re laughing and talking to each other, I always wonder what they’re thinking. So those moments do really hit me sometimes. It’s hard not to think when will the baraat be for me? So, yeah, there’s definitely pros and cons to being so closely involved with wedding planning.”

I think the big question that most viewers have right now is, has Nadia found love?

If there was one thought or message you could leave with single Indo-Caribbean women, what would that be?

“Stay true to yourself and don’t forget your roots or sacrifice your roots because I have done that a lot in the past. I’ve had to put away my Guyanese side a lot and I don’t want to anymore. One of my ex’s liked that I listened to Soca or reggae music in the car but when I talked about going to Caribana, he would say, ‘why would you do that?’ That’s such a big part of my life and I don’t want to settle for anyone who doesn’t want to share that part of my life with me. Because there is somebody who is going to want to listen to my music, and go to Caribana and enjoy every moment of it with me. So, don’t lose that piece of yourself and who you are for someone you think might like you.”

Is it because of her sweet girl-next-door-persona or relatability?  Maybe—but perhaps it’s because of her vulnerability. It’s her ability to connect with us on a raw human level and to be emotionally transparent (something that is oftentimes taboo in the Indo-Caribbean community) that keeps us tuned in to this journey we call “Indian Matchmaking.”